GE Transportation Systems. Marine & Stationary Power (M&SP). is making a strong push to capture medium-speed diesel engine business in the maritime sector, fortifying an international network of service centers and bringing its product to center stage at many of the Autumn 2003 trade exhibition.

GE Transportation Systems has is the market leader in the locomotive business, with 85 percent of its annual production targeted to this business. While marine business has not accounted for a large percent of its overall business to date, its medium-speed diesel engine capability is considerable. In the rail business, no one looks at the engine for 90 days, whereas in the marine and stationary sectors, the engines are pampered.

According to John Manison, manager of GE Marine & Stationary Power, marine operators have traditionally enjoyed good success with the engines in vessel applications, but the company did not build or support an adequate service side to meet the unique demands of the international marine business. All that changed this year, as the company added 25 service centers worldwide in 2003 alone, with plans to expand similarly in 2004. with estimates of 60 to 70 total by year's end.

In addition, they meet current MARPOL and EPA Marine Tier 1 emissions requirements, with NOx below 8.6 g/hp-hr.

According to Manison. "A big advantage for our customers is, that since these engines will meet EPA Marine Tier II compliance which goes into effect in 2007, there are no concerns now regarding future emissions requirements." A recent example of a project that uses GE's new EFI engines is with Washington State Ferries. Each ferry used two GE diesel engines that had been operating for over 23 years. To date, GE has repowered four vessels, each with two, new 12-cylinder EFI GE Diesel engines. Two additional ferries will be repowered by mid-2004.

"No other company we know of offers the same advantage as GE for these EMD engines, because with our emissions technology there is no impact on fuel consumption, reliability, maintainability and serviceability of these EMD engines," noted Manison.

In addition, when upgraded with GE's emissions kits, these engines can meet MARPOL and EPA MARPOL Tier 1 emissions compliance guidelines, with NOx below 8.6 g/hp-hr.

Through a GE M&SP service center, two EMD 645 engines used by Port Jefferson ferry in the metropolitan New York area were brought into MARPOL compliance using GE's emissions kits as part of a new vessel build. The EMD engines had been operating for 10 years on another vessel. The rebuilt engines were brought into MARPOL compliance with GE's EMD emissions kits, offering the customer no increase in fuel consumption.

This 6.200-hp. lower Mississippi river vessel will be the first inland waterway vessel to employ the new GE emission kits.

ACBL has plans to outfit the balance of the EMD fleet with GE MARPOL/EPA Marine Tier 1 emission kits.

International Presence GE marine presence expands well beyond the U.S. borders, as it signed a major deal on stand at the recent Europort 2003 exhibition in Amsterdam.

Rensen Shipbuilding, KB-RCD and General Electric Transportation Systems signed a Letter of Intent for the supply of a GE V8 propulsion engine, for a new chemical tanker being built for Friendship Tankvaart B.V. Funding for this project, estimated to be worth almost $5 million, will be made available through GE.

The Rensen Group is specialized in building inland vessels and has delivered more than 200 new ships in the past 20 years. The company is run by George Rensen. one of a few certified brokers in the world of inland shipping.

He has developed his own concept of building hulls abroad, with most building yards are in Romania (shipyard Orsova). The Rensen Group is agent for this shipyard and Mr. Rensen also represents shipyards in Russia, Poland, Czech Republic and China.

The chosen engine for this project is a GE V8 EFI high compression engine with an operating speed of 1.000 rpm and 1345 kW. GE diesels utilize the new Powerstar controller, which is available with multiple customized protection options. The Powerstar controller houses the electronic governor unit, speed reference and load core and protects the engine against overspeed, overload, low oil and water pressure and positive crank pressure.

"This project is not only significant due to its commercial value but also its strategic importance," said Jan Groeneveld. European Sales Director for GE. "It is the first order for GE to power an inland vessel in Europe, adding to many years of experience in the U.S. market." "GE plans on becoming a serious player in the inland shipping market with a range of engines highly suitable for the current generation of modern inland vessels," said Donikowski. "The engines are known to be long lasting and dependable with very low life cycle costs." The 3,800 cu. m. double hull chemical tanker will measure 110 x 11.40 x 5.60 m, and is due to be commissioned in 2004. The owner of the ship is Friendship Tankvaart B.V.

Progress Shipping B.V, which is the parent company of Friendship Tankvaart B.V. has expressed the intention to place an order for an additional four ships. 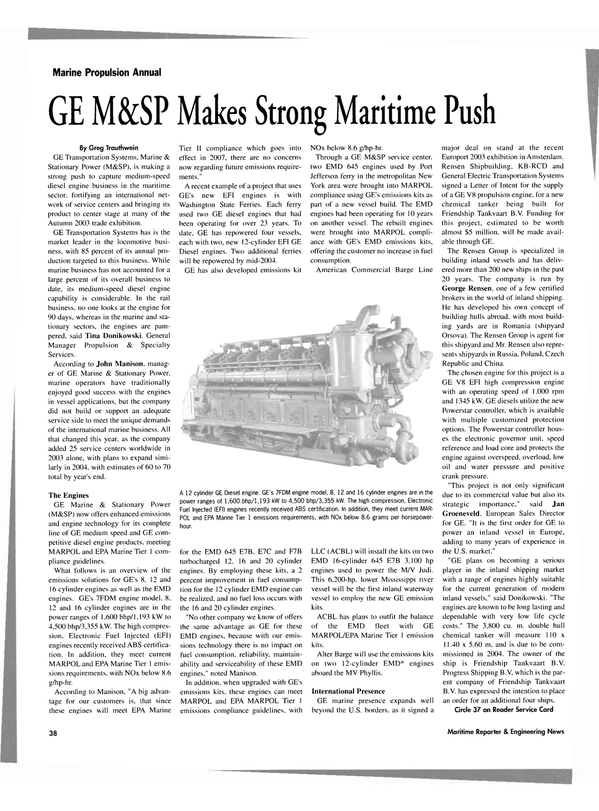