As of July 1, 2003, there were approximately 29,000 commercial self-propelled ocean-going ships worldwide in excess of 1.000 gross tons each. Of these, just over 400 are U.S. Hag. In addition, there are approximately 3,000 U.S. barges of over 1,000 gross tons each. Approximately 25% of these ships and barges are more than 20 years old and will be taken out of service in the near future. The vast majority of the ships and barges taken out of service will be recycled (scrapped). Exactly when a ship is taken out of service is dependent upon a variety of factors, the most important being its maintenance costs and its current charter rate. Thus, the number of ships being offered for recycling can and does gyrate widely over time.

There is growing realization that ships (and, to a lesser extent, barges) frequently contain hazardous materials. These materials may become hazardous wastes when a ship or barge is to be recycled.

Ship recycling in the United States and many other countries in the developed world is subject to environment controls.

Such recycling in lesser developed nations is not currently regulated to the same extent.

Many nations are party to the Basel Convention on the Control of Transboundary Movements of Hazardous Wastes and their Disposal.

This Convention is intended to prevent hazardous wastes from being transported to another country for disposal unless the receiving country has provided knowing consent to such action. Ships being transferred from one party state for recycling in another party state appear to come within the Convention, although there is some uncertainty in this regard.

While the United States is not party to the Basel Convention, it has adopted domestic legislation having the same impact. The Resource Conservation and Recovery Act (RCRA) provides, in pertinent part, that hazardous waste may not be exported from the United States unless various conditions are met. The person who intends to export the hazardous waste must provide written notification to the Environmental Protection Agency (EPA). The notification must contain the name and address of the exporter, the types and quantities of hazardous waste to be exported, the date of the planned exportation, the port of entry at destination, the method of transport.

the name and address of the ultimate disposal facility, and the names of any transit countries through which the hazardous waste will be sent.

More broadly, the International Maritime Organization (IMO) is developing guidelines on ship recycling that may lead to mandatory requirements for an inventory of hazardous material on the ship. This inventory would be initiated during construction and continue to be maintained until the ship is recycled.

At the same time, the International Labor Organization (ILO) is developing guidelines for ship-breaking. These standards would address working and environmental conditions at locations where ships are to be recycled.

The EPA has specifically examined the ship scrapping and recycling industry.

The agency has identified a variety of hazardous wastes commonly associated with ships being scrapped or recycled.

These hazardous wastes must either be removed from the ship prior to export or the consent of both the EPA and the receiving country must be obtained before a ship can be exported from the United States for recycling in a foreign country. The International Chamber of Shipping (ICS), in conjunction with other maritime organizations, developed the "Industry Code of Practice on Ship Recycling." This Code provides that, when a ship is to be sold for recycling, the owner will inventory the potentially hazardous materials on board and take steps to minimize those materials before the ship is delivered for recycling. The Code also contains a list of potentially hazardous and toxic materials frequently found on ships.

The EPA restrictions on export of ships for recycling have been applied to government ships. The Maritime Administration (MARAD) encountered various obstacles and added expense in disposing of obsolete vessels from the National Defense Reserve Fleet (NDRF). After MARAD awarded a contract for the recycling of 15 NDRF ships at a facility in the United Kingdom, suit was brought by several environmental advocacy groups to block the exportation. The complaint alleged a number of violations of law, including the failure to conduct an environmental assessment and the failure to obtain an exemption from the EPA for the export of PCB for disposal.

The trial court allowed the export of four obsolete MARAD ships as a Congressionally-approved pilot program, but has granted a temporary restraining order against export of any further vessels. The major finding of the court in prohibiting further vessel exports is the apparent violation of the ban on export of PCB without an EPA exemption. Subsequently, the UK Environment Agency withdrew approval for the ships to be recycled, noting that the contractor had not obtained permission to expand its facility to perform such work. The four NDRF ships may be returned to the United States in the spring, unless the matter can be sorted out.

As important as the litigation surrounding the export for recycling of the obsolete MARAD vessels is the contract that MARAD awarded for this disposal.

Whereas the traditional arrangement for recycling of ships involves the sale of the ship for its so-called scrap value, the MARAD arrangement provided for MARAD to pay the contractor $14.8 million for removal and recycling of 15 ships. The high visibility of these exports and the government status of the ships were, no doubt, major factors in this unique arrangement. This payment for recycling of ships, though, alters the traditional view that ships always retain a certain minimal value (the value of the steel and related material in the hull).

The French Government is involved in a similar controversy regarding efforts to recycle the retired aircraft carrier Clemenceau. The ship apparently contains over 200 tons of asbestos. Efforts to have the ship recycled in Turkey met with protests and the ship has been returned to France for removal of the asbestos and any other hazardous waste.

Lest anyone think this problem is exclusive to government vessels, your attention is invited to the chemical tanker Sandrien. This ship, suspected of having onboard asbestos and various hazardous chemicals, has been tied up the Netherlands since 2001. The owners have been unable to obtain clearance from the Dutch government to send the ship for recycling in India because the government is requiring full compliance with the Basel Convention.

Due in large part to heightened environmental concerns and new apprehensions about the safety and health of employees of ship recyclers, we may be approaching the day when owners of both government vessels and regular commercial ships will regularly pay to have their ships recycled.

Minimalization and monitoring of hazardous materials on ships is highly recommended. 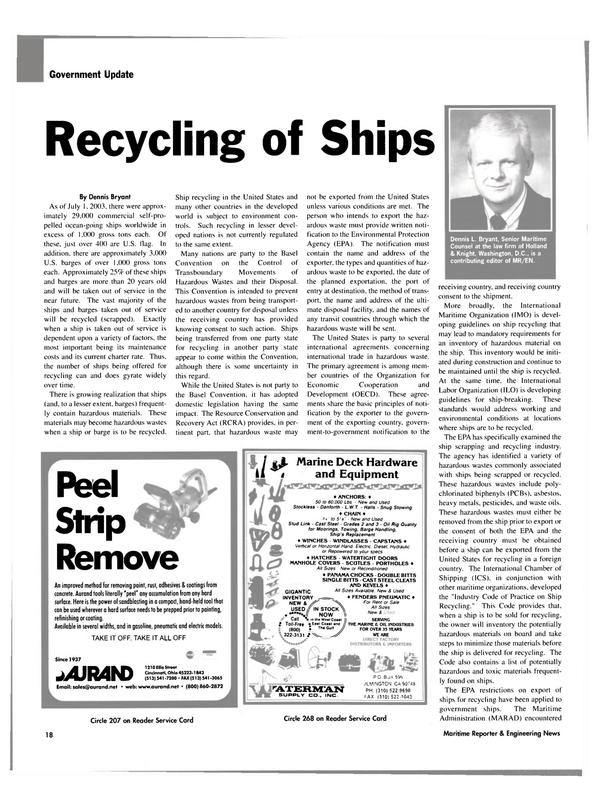