Make Emission Reductions Pay for Themselves

One of our major goals at Washington State Ferries over the last several years has been achieving voluntary compliance with MARPOL 2000, a set of stringent international standards to reduce marine pollution. Part of this effort includes making our diesel engines more efficient. There is technology to accomplish this task, but since we are a state agency with a fixed budget, the cost of this effort has to be offset by finding savings somewhere else.

Even for something as desirable as pollution control, raising our operating cost was not an option. Our customers are mostly daily commuters who depend on the State of Washington for reliable, low-cost transportation.

Fortunately, for the performance trial described below, we selected a technology that has its own element of payback.

To further offset our costs, we experimented with a more creative approach to making our crossings, arrivals and departures. Together, these steps enabled us to reduce our fuel costs and lower our emissions at the same time.

Ours is a state agency which operates 29 deepwater ferries transporting 26 million people every year between Seattle, the Olympic Peninsula and several islands in Puget Sound. In a typical year, we use 18 million gallons of diesel fuel, so maintaining tight control on our fuel usage has a significant impact on our operating budget.

The marine industry, especially our segment of it. has always had a big incentive for using cleaner burning, more efficient diesel engines. On open water there is no place to hide if you are a polluter. Your passengers, passing boats and people living or working near the harbors all take note when they see black smoke, particularly true in environmentally sensitive Seattle.

The Wenatchee Test The approach mentioned above came from a two-year study we did on the M/V Wenatchee, a 470-ft. passenger ferry which plies an eight mile route between Seattle and Bainbridge Island in Puget Sound. Before the trial, the vessel was equipped with a Flo-Scan advanced fuel metering system. In the next phase, we changed our engine lubricating oil to Chevron 477 20-40 multi-grade.

Then we added the technology.

GM Electro-Motive, builder of the engines, now makes these injectors available as original equipment on PMI diesel engines, the result of an agreement between the two companies. The injectors incorporate a number of design innovations that effectively lower emissions and improve fuel economy.

To somewhat offset our investment, we slowed down the drive motors slightly, but only on crossings that would not inconvenience our passengers.

We reduced the vessel's cruise speed from the usual 180 shaft revolutions per minute (SRPM) to 140 SRPM on non-commute runs. We also slowed landings and departures using specific acceleration and deceleration points. The impact on the vessel's schedule was minimal. Speed was reduced by between one and three knots, but only one to three minutes were added to the crossing time, a factor that can be easily absorbed on this route during off-peak periods. Normal cruise speed is between I 8.5 and 19.1 knots.

The impact of these moves on fuel consumption was dramatic. The ECOTIP Superstack injectors have shown in applications by other users that they can produce fuel savings between three and five percent while eliminating visible smoke and cutting down other emissions. By combining them with slower running on the Seattle to Bainbridge island route under the conditions mentioned, we can reduce fuel consumption by as much as 33 percent. That could be as high as 150 gallons an hour, or up to 3,000 gallons a day by our calculations. Projecting these figures, we can potentially save up to $1 million per year.

The ship's officers attested that no visible smoke was seen on either the fast or slow runs. There was no actual comparison between stack emissions before and after we installed them.

However, Valley Detroit Diesel-Allison, a Mira Loma, Calif.-based agent of Interstate Diesel that assisted in the sea trials, took readings after the installation which showed grams per hour emissions almost matched the factory specs for a brand new 4,000 hp GM Electro- Motive 16-710 engines, and excellent result considering some of the Wenatchee engines have 30,000 hours on them.

How much changing the engine lube oil to multi grade contributed to lowered emission and improved fuel economy is unknown, but we feel it made a positive visual impact. However, it is known that it reduced oil consumption, cleaned up the engines, reduced valve guide wear, and, in essence, extended the life of the engines.

The Fleet Lessons learned from this trail will we adopted fleet wide. The fleet of 29 vessels varies greatly in size, route and age, necessitating a different strategy be used to achieve goals. Engines from different manufacturers, blended fuels and low sulfur fuels are also being tested. Fuel injectors, which meter fuel going into the cylinder and turn it into a fine sprat that burns instantaneously on ignition, are playing a key role in the modernization effort. The ECOTIP injectors have several features that have proven effective in helping to reduce particulate matter, hydrocarbon emission, carbon monoxide and sulfur. For example, there is a smaller "sac" area in the tip, a patented feature that reduces the area where unburned fuel can accumulate and help lessen the dribble that can occur after the end of ignition, helping to promote a more complete burn with each ignition. The new injectors also have an improved check valve (patented), a reconfigured follower (patented), and a plunger that is match ground within clearance tolerances of millionths of an inch when inserted into its bushing. Marine operators have big incentives to try latest developments in fuel injectors, as an injector failure means the loss of an engine, vessel downtime and passenger inconvenience.

That's why our injectors are usually inspected or pop tested from 5,000 hours on up, and completely replaced at about 9,000 hours. 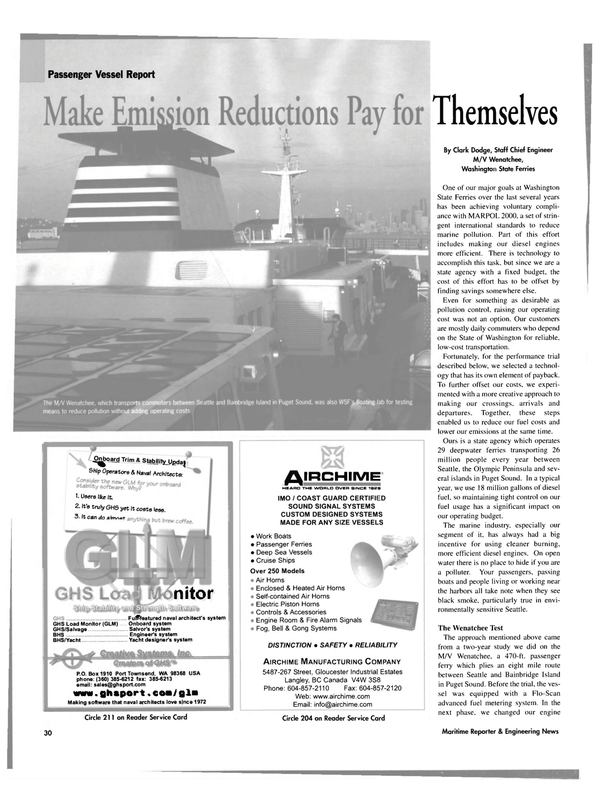