Will there be a Feeder Frenzy?

A study commissioned by Lloyd's Register and conducted by Ocean Shipping Consultants has determined that major investment will be required in feeder and shortsea containerships through to the end of the decade, in support of surging development in the trade and in the size of the deepsea mainline vessels. Over 25 percent of today's worldwide boxship fleet, and nearly 60 percent of the present orderbook, is in the post- Panamax category, and it appears ever more likely that the industry will see the first 12,500-TEU vessels before 2011. "The demand for big ships will clearly lead to higher demand for transhipment." said David Tozer. Lloyd's Register's Business Manager. Container Ships. "The increase in demand for shortsea shipping, as well as the increasing age of the current feeder fleet will further contribute to the need for new feeder vessels.

The projected tonnage shortfall in this size range represents a major opportunity for shipyards and shipping lines." he considered. On the basis of a forecast, staggering 69-percent rise in intra-regional and feeder container shipping volume from 58-million TEU in 2002 to some 99-million TEU by 2010. it is calculated that an additional 986 vessels up to 1.500-TEU will be sought. In addition, on the assumption that many of the ships currently more than 15 years old may go for scrap by the end of the decade, there would be a replacement need for 585 vessels. Accordingly. LR and OCS contend that the net newbuild requirement within the given timeframe will be for 1.571 ships under 1,500-TEU. Were the tonnage build-up to be achieved on a linear basis, this would necessitate new deliveries at a rate of over 200 ships in each of the seven years between 2004 and 2010 inclusive. However, LR acknowledges that the figure is likely to be somewhat reduced by a trend towards higher unit capacities within the under-1.500-TEU field, and also by the deployment of vessels over 1,500-TEU as longer-haul feed- ers. A realistic estimate therefore puts the number of completions required annually at some 170-180 vessels.

Pragmatic 'green' thinking As a possible template for well-reasoned and effective charging on the basis of the impact of a ship's exhaust emissions on the atmosphere, Sweden's environmentally- differentiated fairway dues system has much to commend it. Indicative of the Nordic countries' pragmatic approach to environmental matters, the arrangements put in place by the Swedish Maritime Administration at the beginning of 1998 introduced a form of charging which gave greater economic incentive to 'greener' vessels, by imposing increased dues on those producing the highest noxious emissions. Now, six years along the way, the system is adjudged to have had significant effect, in helping to induce substantial decreases in the amounts of Nox (oxides of nitrogen) and Sox (oxides of sulphur) emanating from shipping activity. According to Per Ekberg, Administration's Manager for Maritime Policy and Public Affairs, the overall reduction achieved in the Baltic Sea and North Sea areas is estimated to have been 50,000-tons for SOx and around 30,000-tons for NOx on an annual basis. The differentiated tariff, plus the now ceased reimbursement scheme for shipboard equipment such as catalytic converters, has also benefited the development and use of NOx abatement techniques.

Now the Swedish authorities are reviewing the system, to investigate how it could become more aligned to the principles of social marginal cost pricing and existing European Union regulations. A further aim of the review is to probe how still stronger incentives for environmentally friendly maritime transport could be introduced into an efficient charging system. The Swedish differentiated dues initiative of 1998, which involves about 25 of the country's ports, has to be seen against a backcloth of not just cultural ethos but fundamental scientific considerations. The Scandinavian ecosystem is highly sensitive to acid rain and acid deposition, and the lack of buffering capacity for acid rain in its soil remains a point of concern for Sweden. At the time the system was brought into being, it was estimated that more than 10-percent of sulphur deposition in Sweden, as in Denmark, the Netherlands and Norway, stemmed from sea transport.

Ships were also considered to contribute between 10 and 20-percent of oxidized nitrogen deposition in Sweden.

Vision FT IBS Launched With a fair amount of secrecy Sperry Marine ushered customers and interested parties into and out of a private room on its stand at Europort 2003, offering a glimpse of what it hopes will become the standard for integrated bridge systems.

Dubbed Vision FT. the unit — the third generation of the company's console bride layout — is impressive with its breadth of integration of current standards, as well as its flexibility for future growth. The Vision FT integrated bridge system (IBS) incorporates the latest advances in marine navigation technology and combines all of the ship's navigation sensors and systems — including radars, electronic chart display and information system, gyrocompass, depth sounder, speed log, DGPS receivers and autopilot — into a completely integrated package.

Central to the system is Sperry Marine's Voyage Management System (VMS) software, which is designed to provide easy and precise route planning and gives a clear real-time picture of the ship's precise position and movement, along with radar targets and automatic identification system data, on an electronic chart display and information system.

"In the future, I believe the main navigation display will be an electronic chart with a Radar and AIS overlay," said Capt. Jan T. Hansen, the company's director of system sales worldwide. This reality is dependent, however, on the availability of electronic chart data.

The Pocket Bridge While Vision FT, like all other IBS systems, must adhere to standards laid down by international authorities, there are many notable improvements designed to appeal to safety and efficiency minded ship operators.

The new bridge console designs have been optimized for modern large-screen high-resolution flat-panel color displays, with easy front-panel access for maintenance and repairs, said Frank Soccoli, director of marketing for Sperry Marine. The man-machine interface has been upgraded with a new ergonomic trackball control device and drop-down menu windows for easy operation minimizing the need for operator training.

Another interesting offering is the PocketBridge, a remote wireless multifunction handheld device that is designed to allow for the ship's master and officers to view data from the IBS and other ship systems on a palm-type computer anywhere on the ship.

Another new capability is NaviVision, an aircraft-style "heads-up" display that projects vital ship navigation data directly onto the bridge windows. 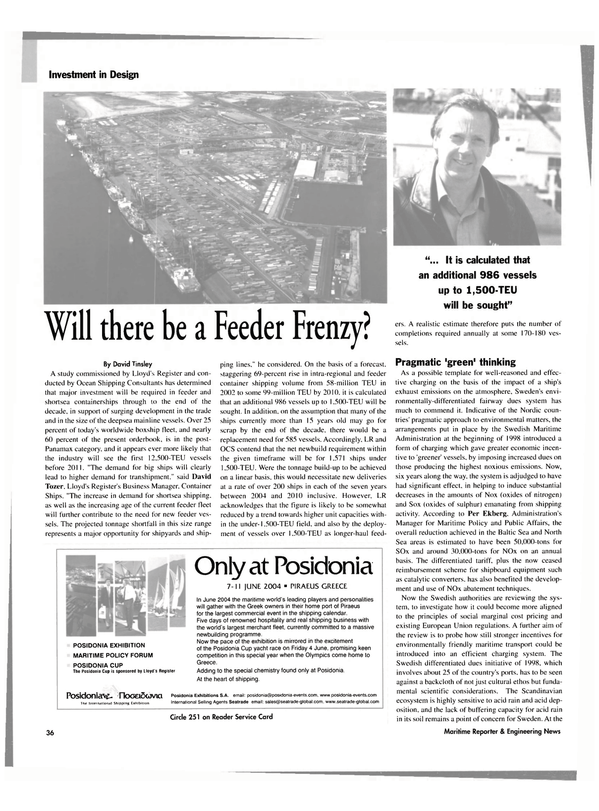 Read Will there be a Feeder Frenzy? in Pdf, Flash or Html5 edition of January 2004 Maritime Reporter