VT Halmatic completed production of the world's tallest yacht mast, which will be fitted on the Mirabella V under construction by parent company VT Shipbuilding. The 90 m hollow carbon epoxy mast, which has a maximum cross section of 1.6 m and structural thickness of up to 40mm, will support some 3,400 sq. m. of sail. Having been loaded onto a barge at VT Halmatic's Portchester shipyard, the mast was transported to Southampton Docks where the rigging will be dressed and the mast will be stepped before fitting out is completed.

The mast has been manufactured in halves, with the back half comprising two sections and the front half divided into three sections.

The manufacturing process, a similar method to that used in the production of Grand Prix racing cars and the aerospace industry, consists of layers of carbon reinforcement pre impregnated with epoxy resin. A vacuum bag is used to consolidate the carbon every few layers.

Carbon compression tubes were prefitted to coincide with the position of each spreader. Some five tons of cabling have been fitted within the hollow center of the mast, including a mass of sensors to monitor the sail performance.

Structural expertise was provided by Hamble-based High Modulus, who are involved in composite engineering aspects for the total Mirabella project. 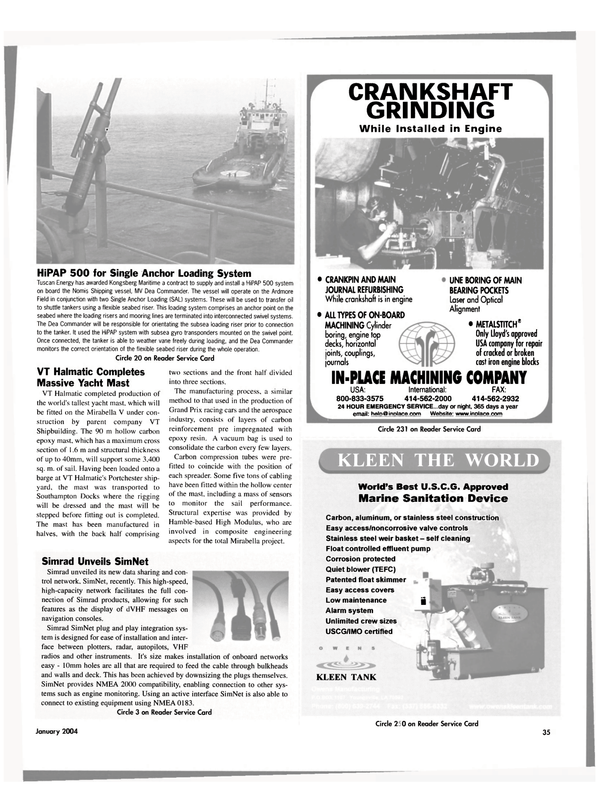