Crowley Sr. Memorial Scholarships to two midshipmen from the U.S.

Mark Miller, director of corporate communications for Crowley, presented scholarships to Jeffrey Jaskot and Audrey Meyers. Midshipman Jaskot. of Orlando, Fla., is a senior majoring in Logistics and Intermodal Transportation and plans to attain a U.S. Coast Guard Unlimited 3rd Mates License. He also is in the process of achieving a Tankerman PIC Rating as well as Crude Oil Wash and Inert Gas Endorsements. Upon graduation, Jaskot plans to use his license and go to sea. He interned at C r o w l e y in t h e s u m m e r of 2 0 0 3 . As a cadet, Jaskot has sailed aboard several ships, including the Central Gulf Lines Green Lake, the USNS Leroy Grumman with the Military Sealift Command, and the APL ship President Jackson. While at Kings Point Jaskot has been an active member of the tennis team, a founding member of the surf club, and been involved in various church activities and other community service works. He was awarded a $4,000 scholarship.

Midshipman Meyers, of Great Neck, NY. is a senior majoring in Marine Engineering Systems and plans to attain a minor in Aeronautical Engineering. As part of her training at sea, she has visited 15 different countries, including Greenland and Taiwan, and plans to go back to sea after graduation. On land, Meyers is a two-year captain of the women's swim team where she holds six academy records and was voted the most valuable player her team for the 2002-2003 season. She was also the chairman of the Ring Committee for the Class of 2004, and is currently the Regimental Operations Officer - the third-highest ranking regimental officer - in charge of planning daily activities.

The interior design will be performed by Bauer Interiors of New Orleans. La.

The main engines are coupled to a pair of Twin Disc MG-5301-DC 4. reduction gears with a 6 to 1 ratio. Electric power will be supplied by two Caterpillar 3408 DITA generators, which each produce 370 kW @ 1.800 rpm. Keel Coolers will be provided by R. W. Fernstrum.

Steering & Engine Controls will be Kobelt, and a 200 hp bow thruster will be supplied by American Bow Thruster.

The vessel is scheduled to be launched September, 2004 with Delivery scheduled for December, 2004. 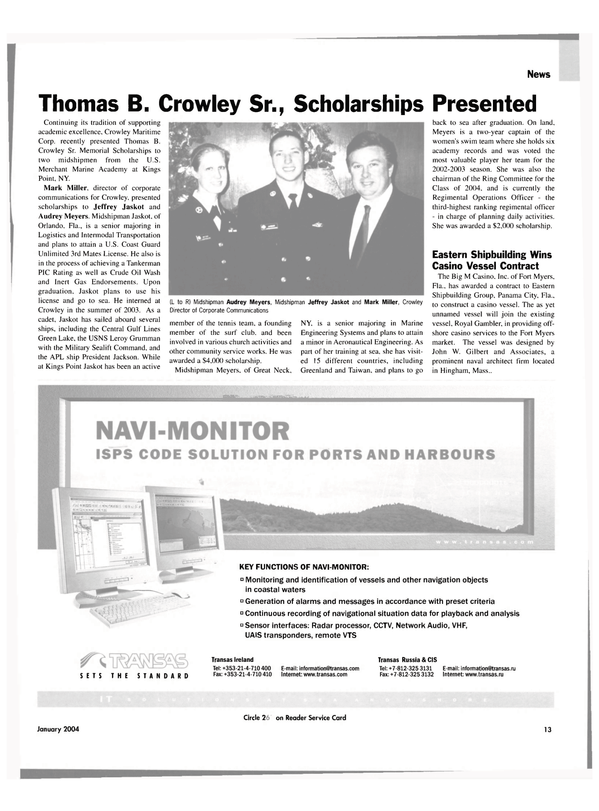