Tom Sansonetti. Assistant Attorney General for the Justice Department's Environment and Natural Resources Division and Marcos Daniel Jimenez, U.S. Attorney for the Southern District of Florida, announced that three senior cruise ship engineers were indicted by a federal grand jury in Miami, Fla., for their role in concealing the overboard dumping of waste oil from the SS Norway cruise ship in false log books designed to deceive the U.S. Coast Guard. The defendants. Chief Engineers Knut Sorboe and Peter Solemdal.

Senior First Engineer Aage Lokkebraten are Norwegian nationals who were employed by Norwegian Cruise Line Limited (NCL) at the time of the offenses. NCL, one of the world's largest cruise lines, previously pled guilty and paid a $1 million criminal fine and $500,000 in community service in connection with the case. The government's investigation began when a for- mer NCL engineer made allegations to the Criminal Investigation Division of the Environmental Protection Agency.

NCL learned of the tip and discovered environmental violations during an internal audit. The cruise line's outside auditor actually witnessed NCL engineers aboard the SS Norway in the act of circumventing the ship's Oil Water Separator, a required pollution prevention device. The engineers deliberately used fresh water to trick a machine's oil sensor designed to detect and limit the overboard discharges. NCL reported the criminal conduct to the government, which was already investigating the whistle-blower's tip, and has cooperated in the government's investigation.

"(These) charges are necessary to show both companies and individuals operating and managing ships that they may not pollute our oceans and lie to our government." said Sansonetti, Assistant Attorney General for the Justice Department's Environment and Natural Resources Division. "Corporations do not act alone but through the acts of individuals and they must also be held accountable. This prosecution demonstrates the continuing commitment of the United States Attorney's Office to aggressively prosecute environmental crimes," said Marcos Daniel Jimenez, U.S. Attorney for the Southern District of Florida Prosecutors announced that U.S. District Court Judge Joan A.

Lenard awarded the whistle-blower $250,000. The indictment alleges that the defendants engaged in a conspiracy to use false Oil Record Books in order to conceal overboard discharges from the SS Norway without the use of a properly functioning Oil Water Separator and in order to obstruct Coast Guard inspections. 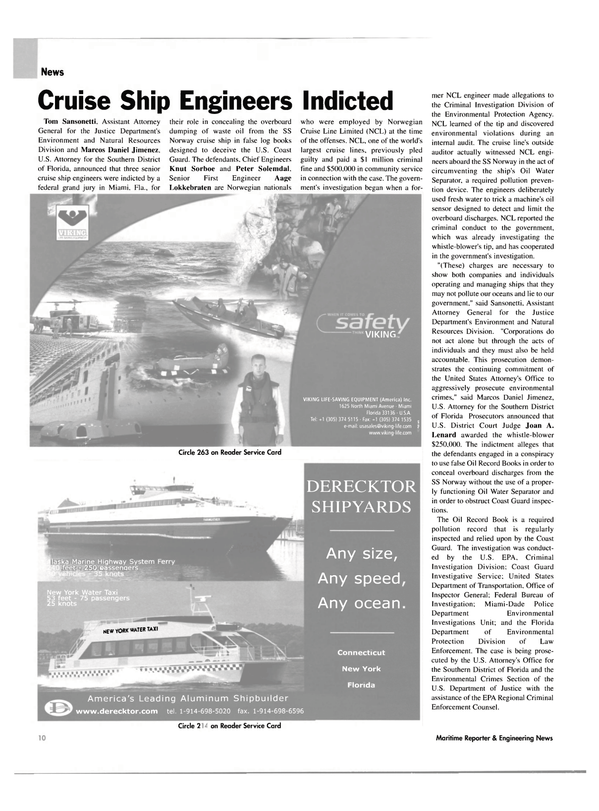