The International Maritime Organization (IMO), recently announced stricter regulations governing the tanker industry on a worldwide basis. The IMO regulations, scheduled to become effective April 5, 2005, will accelerate the mandatory phase-out of single-hull tankers as well as impose a more rigorous inspection regime for older tankers. The regulations will ban the oldest single-hull tankers, representing approximately 12 percent of the current world tanker fleet, from worldwide trading by the end of 2005. It is expected that a further 25 percent of the existing world tanker fleet will be excluded from the majority of the oil tanker trades by 2010.

Based on information provided by the IMO, 19 of Teekay Shipping's total fleet of 149 vessels will be affected by the IMO accelerated phase-out schedule, effectively reducing the economic life of each of these vessels. As a result of these regulations, the company expects to take a non-cash write-down to the book value of certain vessels totaling approximately $50 to $60 million in the fourth quarter of 2003, representing approximately 1.5 percent of the company's total assets. Bjorn Moller, Teekay's President and CEO, said "We view the amended IMO rules as very positive news for Teekay as one of the world's largest operators of high-quality modern tonnage. The accelerated phase-out of 12 percent of the world tanker fleet over the next two years coupled with the forecasted increase in global oil demand should offset the current tanker orderbook.

As a result, we expect the current tight balance between tanker supply and demand to continue during this period. These regulations should also lead to increasingly difficult trading conditions for single-hull tankers from 2010, if not sooner. It is therefore appropriate to take a write-down due to the likely discrimination against single-hull vessels." The table below compares the composition of Teekay's fleet with the world tanker fleet as of December 1, 2003. Over 83% of Teekay's fleet is either double-hull or double-bottom/sided which are unaffected by the IMO accelerated phase-out schedule, compared to approximately 68% of the current world tanker fleet. 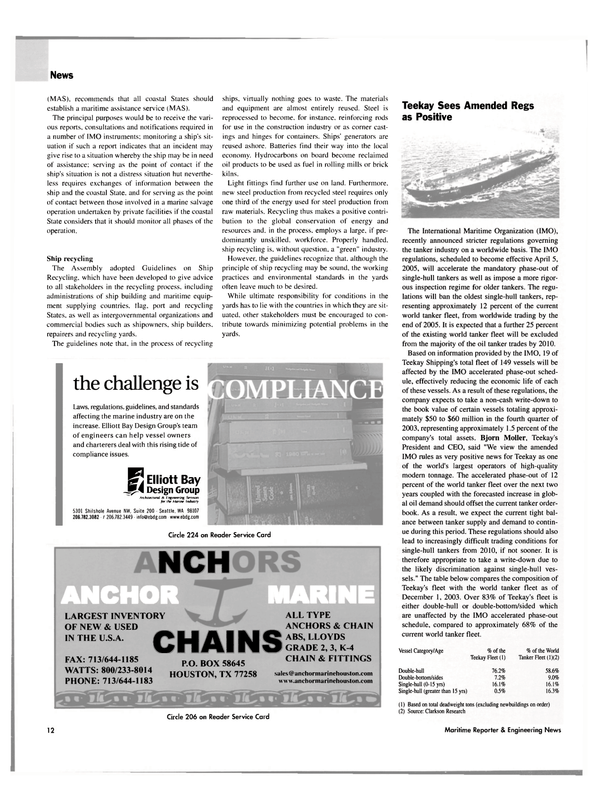