Marek: Hapag-Lloyd today is a global logistics company that offers its customers the complete range of transportation options to help them better manage their supply chain activities. Our 40 state-of-the-art container ships primarily service the crucial East-West trade routes around the globe. These container ships dock regularly at the most-important ports of the world.

Q: Which shipyards do you prefer to contract?

Marek: As a rule, we advertise for bids internationally.

Unfortunately, from our perspective, German shipyards are not competitive in our line of business. For the past 15 years we have been ordering ships exclusively from South Korean manufacturers. We started with Samsung, but then chose Hyundai to build our last eight ships. Hyundai also has the contract to build three ships we recently ordered. The vessels are slated for delivery in 2005 -2006.This shipbuilder offers exceptional quality at a good cost/benefit ratio.

Q: What specifications do you give shipbuilders?

Marek: Since our design specification booklets are about 500 pages, we have very specific requirements for our new ships. These include ways to optimize the distribution of containers according to their size; speed specifications; and last but not least, our environmental requirements. We expect the ship 's materials to have a 25-year service life. We also specify how we want the ship to be equipped -engine type, auxiliary machines and accessories. While much of the equipment is European-made, many European suppliers now license parts production to Korean manufacturers.

MAN B&W Diesel in Copenhagen, Denmark, for example, will provide just the design for our ships' engines.

Q: How would you size up the immediate future of the shipping industry?

Marek: On average, worldwide container transport has grown by 6 percent annually. In recent years, Hapag- Lloyd has even posted double-digit growth rates. This surge is not expected to end anytime soon, as the globalization of trade continues to keep pace with the phenomenal growth trend in container shipping. There are many products that used to be transported conventionally in special ships that are now being delivered to the customer in standardized boxes. Another sign of the market 's growth is the sizes of the ships being built today. Four to five years ago. all our vessels could pass through the Panama Canal. Those ships are a maximum of 294 meters long, 32.8 meters wide and have a storage capacity of approximately 5000 containers. To meet the growing demands for transport services that I mentioned earlier, we had to order bigger ships. Our new Hamburg Class features four ocean giants. They are 320 meters long. 43 meters wide and offer a storage capacity of 7500 containers.

Q: Will ships become even bigger?

MAREK: We recently ordered three ships with storage capacities of up to 8000 containers. Whether ships will get even bigger than that is impossible to predict right now. Based on our current observations, if ships get even larger, something will have to be done to improve the current propulsion systems so that they will meet the minimum speed of 25 knots stipulated by Hapag- Lloyd. Also, one should not forget that ports around the world will need the appropriate equipment and an improved infrastructure to capably deal with the rapidly growing shipping volumes. In many ports, these issues are already a serious challenge.

Q: How does that impact the propulsion side?

Marek: The performance requirements rise to the third power not only with increasing speed but also with additional weight. Currently, we are satisfied with the nearly 68 000 kilowatts produced by the 98 engine from MAN B&W Diesel. If we remain with a singleshaft operation, we will need an engine with a 108-centimeter cylinder bore or 14-plus cylinders in ships with a storage capacity of 9000 to 10 000 containers. Ships that exceed even those capacities will need a doubleshaft operation. One must also consider the possible size limitations of the propellers.

Q: What are your most important goals?

Marek: Hapag-Lloyd is intensely focused on staying innovative and successful in the business. We also aim to maintain the leadership role we play in the international shipping community when it comes to environmental protection. We consider this an important and significant responsibility.

Klaus Marek, 63, is Chief Superintendent Engineer at Hapag-Lloyd Container Line based in Hamburg, Germany. He is the company's Head Ship Inspector and top technician. Marek and his team oversee the construction of new ships as well as four ocean liners owned by subsidiary Hapag-Lloyd Cruises. A marine engineer, Marek did his engineering training at the Howaldtswerke shipyard in Kiel, Germany. He went to sea in 1959; in 1968 he was awarded his certificate in ship propulsion systems and became head engineer.

After 28 years at sea, he moved to a desk position, at which time he assumed many of his current responsibilities.

The preceding was reproduced, with permission from the magazine Primemover, a publication from engine manufacturer MAN B&W 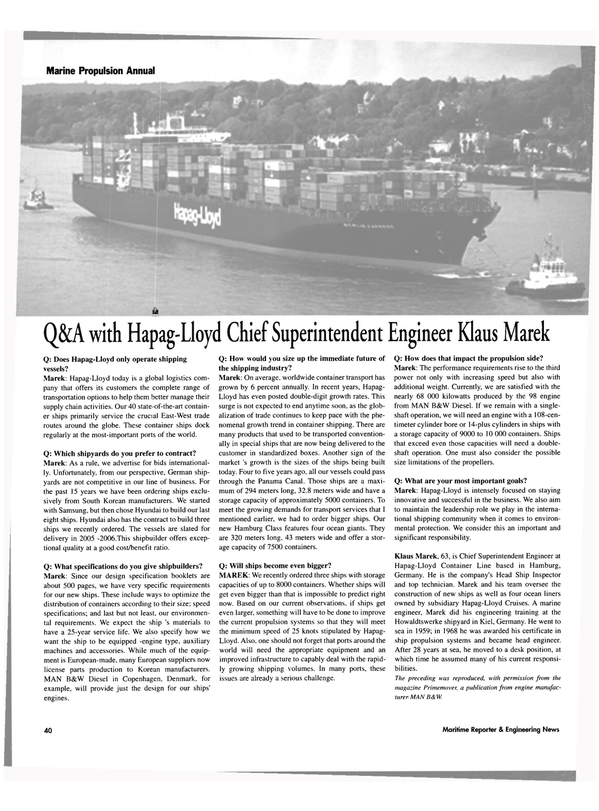