By any measure, 2003 was a turning point in the 213- year history of the U.S. Coast Guard. Beginning with the introduction of a new Maritime Strategy for Homeland Security early in the new year and continuing with its realignment under the Department of Homeland Security in March as part of the largest reorganization of the federal government since the post-World War II era, the scope and scale of the Coast Guard's maritime, multi-mission, and military operations during the past year were nothing short of extraordinary.

Coast Guard men and women rose to the challenge, bolstered by the largest mobilization of reservists in our history. Collectively, they fought the Global War on Terrorism at home as well as overseas. Heightened Coast Guard presence and vigilance in U.S. ports, waterways, and coastal areas significantly increased the safety of American citizens, protected critical infrastructure, and assured the free flow of sea-borne commerce.

Each of these accomplishments is significant individually.

When considered in combination with its performance in other traditional mission areas, the collective magnitude of the Coast Guard's sustained operational excellence during 2003 is truly noteworthy.

We strive to be semper paratus, always ready, as we confront the global challenges to ensuring the peaceful and sustainable use of our world's oceans and resources.

Let there be no doubt, this is a changed world. The events of September 11. 2001. and their aftermath, created a seismic shift in how we address the multifaceted, national security risks confronting the United States.

Importance of Maritime Sector As a seafaring nation dependent upon the oceans for its economic prosperity, the scope of our maritimesecurity challenge is profound. Thousands of ships and millions of containers enter our 361 major seaports each year. Our maritime border consists of 95.000 miles of open shoreline, 25,000 miles of navigable waterways, and 3.4 million square miles of exclusive economic zone.

A successful terrorist attack against the U.S. maritime transportation system would wreak economic havoc. The Organization for Economic Cooperation and Development estimated that a terrorist strike against the U.S. cargo-shipping system could cost the U.S. economy as much as $58 billion.

To forestall such devastation, the Marine Transportation Security Act of 2002 and the International Ship and Port Security Code regulations were created. Clearly these requirements have a tremendous economic and international impact on the shipping industry. That is why we are committed to using the International Maritime Organization, a multi multilateral approach, to develop and enact the necessary standards. But. whether we like it or not, terrorism is a persistent threat ... it is real ... and it is impacting us today. I want you to envision the new security regime as an insurance policy, because hope is not the answer.... awareness and prevention are.

The Coast Guard's primary emphasis as a regulatory and law enforcement agency had been on safety, the environment, and vessel traffic management ... that is.

the safe and efficient movement of waterborne commerce.

With the horrors of September 11th came the imperative to identify and reduce security gaps in the maritime. It is essential that we get this right ... the maritime sector is one of the most valuable and vulnerable components of our transportation system. The challenge is substantial.

Reducing Maritime Risks As with other components of our transportation system.

the challenge in securing the maritime sector is how to do so while concurrently facilitating the flow of people, cargo, and vessels. Our job is to manage that risk. The costs of a maritime terrorist event, the shutting down of a major port, would be in the billions, and the potential loss of life and public confidence would be devastating.

Let's remember, we've done this before. Think back to the early 90's, with our Domestic Port State Control program ... many were concerned about over-regulation and possible negative consequences. Well, in time, we had amazing improvements, resolving safety and environmental protection issues, and resulting in a 65% reduction in the number of unsafe vessels that had to be detained from entering the United States.

In keeping with the Coast Guard's duty to ensure the nation's maritime security. I must not only respond to today's threats, but I also must position the Coast Guard to properly deal with the full range of potential threats likely to emerge in the future. I expect that five years from now, we will have similar improvements, with a reduction in the number of stowaways, as an example. There are great incentives for the good guys incorporated in these security requirements: people who subscribe will have smooth sailing.

Maritime Security Strategy To get to that state, we have developed four key elements to our maritime security strategy: • Enhance our Maritime Domain Awareness by increasing our visibility of all activities associated with people, cargoes and vessels.

• Build and administer an effective maritime security regime - both domestically and internationally.

• Increase the federal, state and local operational presence in ports and coastal zones and beyond for a layered defense-in-depth security posture, by aggressively enforcing and exercising domestic and International Security standards, and • Improve our response posture in the event a security incident does occur by building the right response capabilities and maintaining high readiness posture for our ships, aircraft, boats, and hazardous material strike teams.

Implementing the Strategy On the whole, we have developed a regulatory system which balances security and commerce to ensure the free flow of commerce. It mitigates risk while minimizing the negative impact to the marine transportation system.

• We in the Coast Guard set the standard, and gave industry the opportunity to define the response. We ensured a level playing field. Consistency is the key to a strong business climate and we strive for consistency on three levels - among companies, among states, and among countries.

• Our risk-based decision model allowed us to focus on and only regulate those entities that presented the greatest relative risk. Many vessels, facilities adjacent to the water, and offshore platforms, will not be regulated.

due to their minimal threat level, thereby keeping security costs to a minimum.

• We opted not to mandate some specific requirements that were considered earlier—such as specific licensing or training course requirements, or requirements to install bridge video monitoring equipment.

• We used performance-based measures generally to allow those regulated to select the best measures for their vessel or facility.

• We encourage industry trade associations to customize these security standards to their industry segment through alternative security programs.

• We allow for "equivalent levels of Progress since September 11th, 2001 security" to recognize more cost-effec- We have made progress in all four eletive ways of attaining the same security ments of our strategy ... from my perlevel.

spective we are getting more secure each day: • We have increased advance notice of arrival to 96 hours.

• We require more detailed information and visibility and risk awareness of cargo, passengers and crew.

• We have an international agreement to accelerate AIS (Automated Identification System) requirements, and we are proposing long-range tracking devices be required internationally.

• We have greatly expanded both our security capacity and capabilities, including a sea marshal program, new MSST's (Marine Safety and Security Teams), and vertical insertion and use of force from helicopters.

• We have successfully partnered with industry to provide reward for good behavior: Port State Control provides incentives for compliance by foreign flag vessels.

Conclusion As General Eisenhower once said, "History does not long entrust the care of freedom to the weak or the timid.

America has been freedom's protector for more than 200 years. It is our nation's greatest strength...our collective heritage passed down by patriots who fought and died to preserve and protect it.

We have not come this far to forsake freedom now. We must not flag in our determination, in our devotion to this great cause. We must protect it while we are on watch and ensure that it continues to flourish for future generations." Terrorism is an international threat.

Shipping is an international business.

Maritime security requires long-term international solutions. The U. S. Coast Guard will aggressively implement and enforce the international maritime security standards and hold other nations that trade with us accountable for the full implementation of the ISPS Code by luly 1, 2004. While there are costs in implementing the requirements of ISPS, the financial and human costs of not implementing necessary security measures are too high. The loss of freedom to travel and trade are not acceptable alternatives.

The threat to the security of our maritime homeland is not an acceptable alternative.

I believe we have done much to work with the private sector to ensure that the regulations are consistent and fair, while minimizing the cost of security and the impact on the flow of commerce. The key to this initiative is strong partnerships.

The cooperation at the port and state levels has been tremendous since September 11th. But we cannot let our guard down. No one company ... no one agency ... no one country ... can do this alone. We must continue to work together to enhance security and advance our public and economic interests. 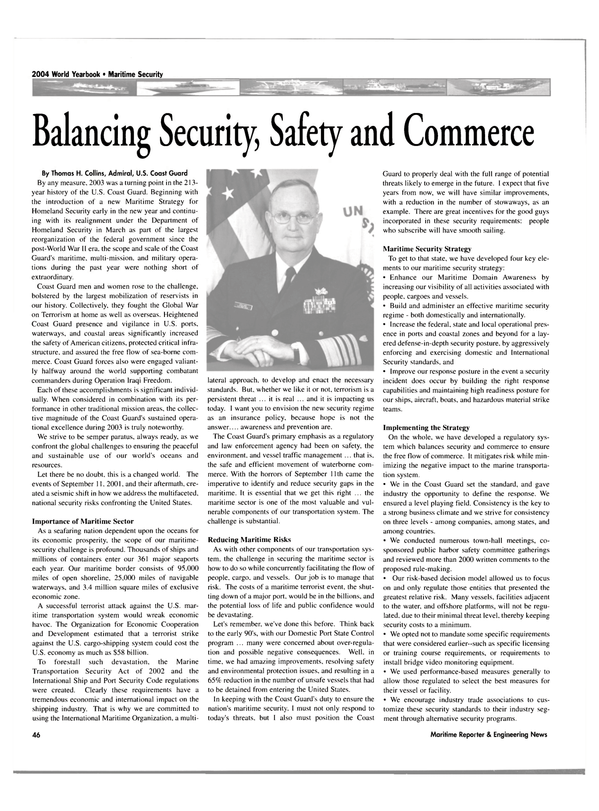