The Layered Approach from a One-Stop-Shop

The rush to shore up security along all links of the transportation chain — and the multi-billion dollar budgets that go with them — have naturally brought companies out of the woodwork in what some see as a dash for cash. While the Department of Homeland Security, still relatively in its infancy, has been prudent in the award of contracts to date, the proliferation of funds seems to be loosening in the estimation of many interested parties, and companies that can exhibit a long and strong history of supplying integrated security solutions should obviously have a strategic advantage.

Smiths Detection is such a company, offering a history of successfully providing security solutions to both civil and military clients, dealing from a vast product and system arsenal.

The terrorist attacks of September 11 and resulting national and international security regulations, obviously, have changed the security stance of around the world, modifying, sometimes drastically so, the steps that are taken in order to ensure the security of the U.S. transportation infrastructure. At the same time, the world economy is dependent on a seamless flow of goods, with long delays producing quickly mounting losses.

"While recent events have attracted new companies to this industry, security detection has been deployed for decades with the first Heimann x-ray system, now Smiths Detection, being deployed at airports in the 1970s," said Wayne Horvath, Director of Sales, Ports and Borders. "We are one of the largest companies and have plans to further grow by developing and acquiring new detection technologies." Part of the growth strategy was recently enacted with the company's acquisition of SensIR Technologies LLC, a manufacturer of infrared-based analyz- ers, for a total of $75 million ... the second acquisition for Smiths Detection in 2004.

The acquisitions help to complement an already impressive product line-up.

"No single product is capable of mitigating all potential threats." He notes that there is no "silver bullet" security solution. Growing opinion among security professionals confirms that the layering of multiple technologies offers the greatest level of protection.

"Its extensive range of detection technologies allows Smiths Detection to secure access points from multiple threats, as opposed to the single product providers that have traditionally occupied this space." For more information from Smiths Detection Circle 4 on Reader Service Card 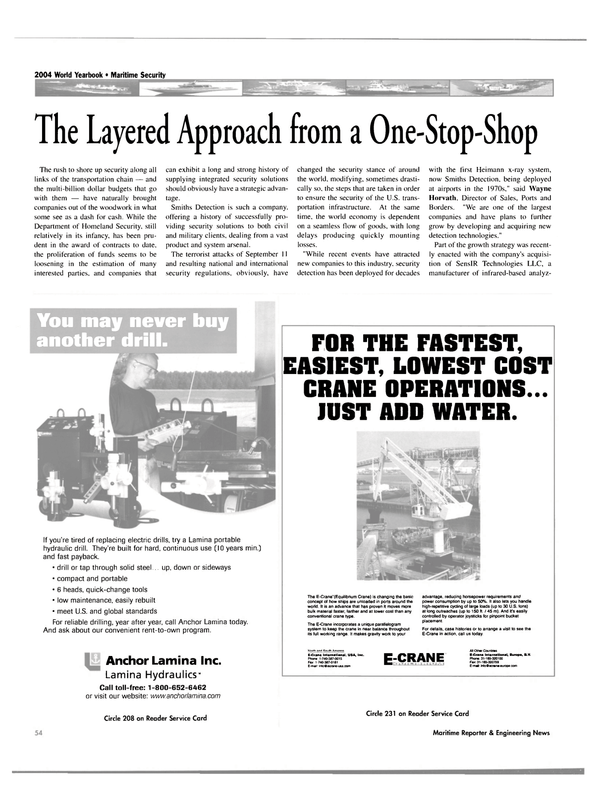 Read The Layered Approach from a One-Stop-Shop in Pdf, Flash or Html5 edition of June 2004 Maritime Reporter