The Containership Market: Full Steam Ahead?

Liner shipping is traditionally a cyclical business, subject to dramatic peaks and troughs and sudden changes in fortune in individual trade lanes. Today's ebullience among all sectors of container shipping, including its various intermediaries, compares starkly with the situation in the latter part of 2001, when the market had hit a low point and the prophets of doom were out in force. Yet, only a year before that, market analysts had been talking of inexorable growth in seaborne containerized transport. Right now, the industry exudes confidence that the bull market for deepsea carriers will continue through 2004, after what proved generally to be a boom time for the liner shipping world last year, on the back of a rebounding world economy.

The container liner business has two strong cards. One is that it is based on the exchange of multifarious finished goods and semi-finished products between a multitude of buyers and sellers in both mature and emerging markets, with a gravitation to consumer-led trade. The other is that container shipping was conceived from the outset as an intermodal system, faciliating the efficient intermeshing of each element in the transport chain from cargo source to point of delivery.

A record volume of new tonnage was ordered in 2003, against surging trade demand, not least for cargo out of China, and strengthening rates and liner shipping company profitability gave a boost to the industry after the slump of 2001- 2002. The shipper community felt the affects of the buoyancy in shipping, by way of contracts concluded at higher levels and shorter durations. Although vessel capacity is set to grow by 8% this year, it is anticipated that cargo demand will ensure that the new volume is taken up. China's economic growth in 2003 has been quantified as 9%, and the country's emergence as an export-orientated industrial powerhouse can be expected to continue to have a signal, positive bearing on the liner shipping market in the foreseeable future.

Paris-based broker Barry Rogliano Salles reported that the global cellular fleet reached 3,185 ships of 6.63-million TEU at the outset of 2004, signifying an 8.9-percent increase in capacity over the year, albeit less than the average annual growth of 10.7-percent for the past 10 years. BRS calculated that 177 vessels totalling 575,000-TEU were delivered in 2003, compared to 201 of 646,000- TEU completed in 2002. However, last year's newbuild contract intake reached record levels, totaling 520 vessels of 2.123-million TEU. The massive influx of new construction drove the order book to 2.7-million TEU by the start of 2004, corresponding to 41-percent of the existing fleet. To give added perspective to the newbuild boom, the value of cellular tonnage booked in 2003 amounted to nearly $22-billion, whereas the 82 ships of 363,000-TEU booked in the preceding year represented an overall contract worth of $3.7-billion. The broking house anticipates that the world cellular containership fleet will grow by 11.3-percent per annum to reach 9.15- million TEU in January 2007.

Significantly, due to the predominant capability among the large ships for a speed over 24-knots, the transport potential will have risen at a faster rate than the advance in capacity.

"Given the schedule of deliveries, the size of the fleet may enter the 'danger zone' in the second half of 2005, and 2006 could be a year of low charter rates," warns BRS. Some 80-percent of the capacity ordered in 2003 was made up of ships in excess of 4,000-TEU, including 109 newbuilds over 7,500- TEU. In the latter category, the order book was accordingly boosted to 126 vessels at the beginning of January this year, compared with only 30 ships of more than 7.500-TEU in service. "Very large container ships (VLCS) of 8,000- 10,000 TEU will be the workhorses of the Asia/US and Asia/Europe routes during the second half of the decade." forecasts BRS. "At the beginning of 2007, 140 ships of more than 7,500-TEU will ply the high seas," adds the company, observing that this will be enough to run 12 Asia/Europe loops and 12 Asia/US loops, offering a weekly capacity of 100,000-TEU on each of the trades. By 2010, there could be as many as 300 such vessels in operation.

In a presentation to the Liner Shipping Conference held in London during April this year, Howe Robinson Shipbrokers' head of research and consultancy, Paul Dowell, put the boxship orderbook to that point at 650 vessels of some 2.9- million TEU, of an average size of 4,350-TEU and equating to 39-percent of the global fleet. Deliveries spanned the next three and half years, including scheduled completions of 173 ships of 688,500-TEU in 2004. 212 vessels of 789,000-TEU in 2005, and 216 ships of 1,067,000-TEU in 2006, with around half a million TEU of new capacity contracted so far for handover in 2007.

From an average size in the region of 3,700-4,000 TEU for this year and next, the average for the 216 ships to date due out of yards during 2006 swells to 4,875-TEU. Notwithstanding the huge tonnage expansion implemented in recent years, Mr Dowell suggested that the under-4,000 TEU sector had been "under-built" since 2000, as would be !he case until 2006 at least, and that the supp!y of Panamax ships could be expected to be tight for the next three years While observ_ ing that shipyards have limited capacity available until 2007 and that newbuild costs are increasing, he ventured that there could be an undersupply of charter ships for 30 months or more.

The liner shipping industry's quest for greater economies of scale and enhanced unit cost efficiency has seen the largest vessels more than double in carrying capacity since the first generation of 4,300-TEU post-Panamax ships made its debut little more than a decade and a half ago. The growth in cargo volume has been attended by a requirement for speeds of 25/26 knots to meet scheduling needs and service expectations.

The current advance to vessels in the 9,000/10,000-TEU category may be viewed as an interim step until the realization of long-mooted plans for behemoths of 12,000-TEU and perhaps larger, for which the industry is prepared.

Port and terminal operators in major trading and transhipment areas continue to invest in the capability to accommodate and efficiently work future genera- tions of mega-containerships.

Broker sources attributed a price of around $94-million per ship to a pair of 8,600-TEU newbuilds placed in South Korea during March this year, underlining the steep climb in costs from 12 months previously, when tonnage in the 8,000-TEU category from Korea commanded in the region of $75-million to $80-million. At the time of writing, with pressure on berths and surging steel plate costs, there was every likelihood that boxship negotiations in hand would result in prices breaking the $100-million barrier. The latest phase of Hapag fleet investment calls for deliveries of two 8,600-TEU vessels from Hyundai Heavy Industries in spring and fall 2007.

The huge capacity will be attended by a 25-knot speed, to meet scheduling requirements in the trade between Europe and eastern Asia, and the design to be employed will have a length of 335-metres, breadth of 43-metres, and draught of 14.50-metres.

Explaining the rationale behind the contract, the company's executive board chairman Michael Behrendt said "Our fleet expansion program shows that we intend to take advantage of the market opportunities resulting from the expected growth in world container transport.

In view of the current market conditions, we have decided to purchase the ships, as this is less expensive than chartering." With the April 2004 commissioning of the last in a series of four 6,750- TEU newbuilds, the Hamburg operator is set to add two vessels in the 8,400/8,600-TEU range to its liner framework next year, to be followed by a further 8,600-TEU newbuild during 2006, before the planned handover of the most recently contracted pair.

Developments in two-stroke diesel engine design have had a fundamental bearing on the realization of plans for single-engined, direct-drive containerships offering capacities in excess of 8,000-TEU at speeds to 26-knots. It is considered that the largest low-speed diesels already in production can provide adequate power for linehaul ships up to around 9,000-TEU at the requisite speeds, while as yet untried 14-cylinder versions of existing MAN B&W and Wartsila Sulzer designs, plus the widerbore K108 type developed by MAN B&W, push the bounds further. 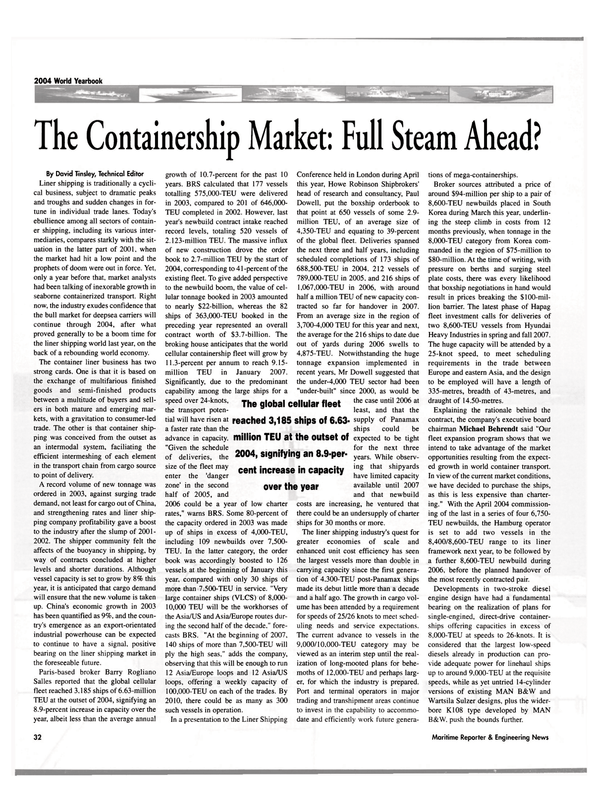