The Joint Harbor Operation Center (JHOC) — pronounced "Jay - Hawk" —v on Naval Station Norfolk is the pinnacle of cooperation between the U.S. Coast Guard and the U.S. Navy; jointly devised, outfitted, staffed and maintained to protect what is arguably one of the most diverse, sensitive and valuable series of waterfront installations in the nation.

The JHOC established on Naval Station Norfolk in wake of the September 11, 2001 attacks is serving as a sort of prototype for the rest of the nation, with a similar JHOC under development in San Diego. It is unique as, for the first time it brings together the Navy and the Coast Guard in a joint operation to ensure port security, specifically monitoring military and civilian vessels entering and exiting the lower part of the Chesapeake Bay.

The 'Red Box on Stilts' Left to the imagination, one might envision the JHOC housed in an ultra-sophisticated and secretive bunker; a James Bond-esque facility employing the latest technologies to effectively monitor such a vast expanse of waterway and track the vessels transiting them.

While much of the security attention has focused on New York and Washington for good reason, the Norfolk area, with a diverse commercial and military mix of potentially attractive terrorist targets, is the quintessential locale for the JHOC experiment. Assets on the lower Chesapeake, which includes the Elizabeth and James Rivers, include: the largest concentration of naval ships and facilities in the world, including Navy Intelligence Command, and, at any given time, perhaps a half dozen aircraft carriers; the Cove Point LNG facility; three major container ports, in addition to a fourth, recently announced $400 million container port; a growing Cruise Port; as well as a number of bridges and tunnels.

While the new JHOC facility in Norfolk, scheduled to open later this summer, will fit the high-tech mold, the current facilities are, in fact, the polar opposite.

JHOC's home today is an old degaussing tower that had been used to neutralize the magnetic field surrounding ships, and prior to September 11 was empty and scheduled to be demolished. Dubbed by some observers as "the red box on stilts" (see photo, right), the center was opened about a month after September 11 and was "basically a box with a pair of binoculars and a space heater ... and the space heater didn't work too well," said Robert T. Nelson, Jr., Lieutenant Command, U.S. Coast Guard Reserve.

From humble roots JHOC will evolve into a template upon which other such ventures may be based, but there are currently only loose plans to develop JHOCs in areas where there is a strong Navy presence.

Evolution is the keyword, as the U.S.

security stance, with the creation of the Department of Homeland Security, which subsequently integrated the U.S.

Coast Guard from the Department of Transportation — continues to morph in devising an adequate security posture for an estimated 95,000 miles of waterfront.

While JHOC is a natural evolution and an efficient use of information and resources, operations such as this have raised questions as it is considered by some close to crossing borders established by The Posse Comitatus Act (PCA) of 1878, which states: 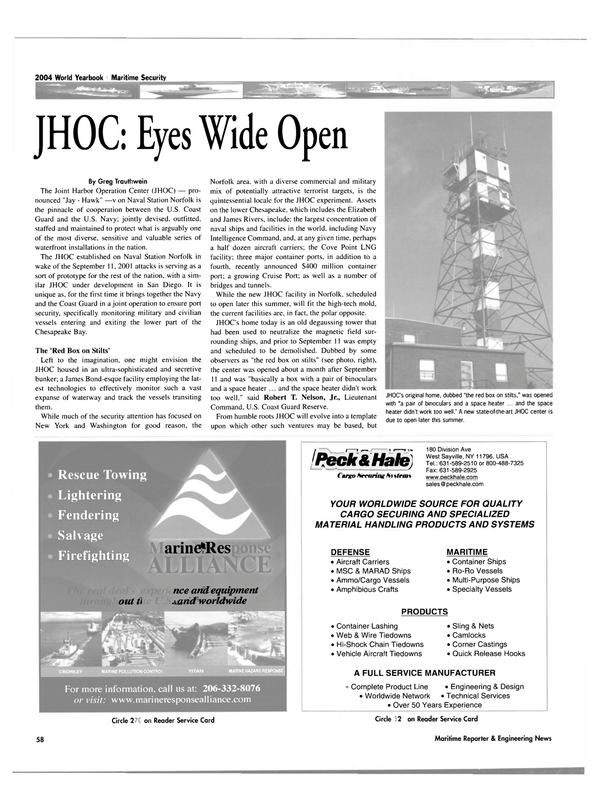