When the Clock Strikes Midnight

When the clock strikes midnight June 30, 2004, the world will watch with wonder to see if shipping as we know it will come to a screeching halt off the U.S. coast, as the deadline for companies to comply to the letter of the new maritime security laws enters force.

With speculation running rampant and a flurry of last-minute paperwork, retiring Chief of the Marine Safety Division.

I remember as a trainee in 1973 the mantra was (for the USCG) to facilitate commerce," Schrinner said.

Learned young and practiced over a decorated 30 year plus career, Capt.

Schrinner is intent on seeing that the Coast Guard does its job — specifically.

"By the letter of the law, we can deny entry of a ship (not in compliance), but before leaping to that drastic step, there are options," Capt. Schrinner said.

The enforcement posture post July 1, 2004 is not black and white, Capt.

Schrinner admits, as the USCG has developed a "proportional scale of enforcement." These options, depending on a myriad of factors including the overall performance history of the vessel, the port of origin and the last port-of-call before reaching U.S. shores, include but are not limited to expanded security checks at sea, vessel escorts, and the requirement of the operating company to hire additional security personnel.

While the Coast Guard holds its duty to protect U.S. interests in the highest regard, it is clear that a combined effort within the Department of Homeland Security, the Maritime Administration and the State Department is intent on ensuring that companies, and in some cases entire countries, in good partner trading status with the U.S. are not financially ruined by a hard-line, nonflexible approach to enactment of the new rules.

"We have to balance the effects of security sanctions versus U.S. trade policy," Capt. Schrinner offered. "Overall, though, it looks as if a large percentage of shipping companies will be in good shape." The Coast Guard will, in fact, employ its resources to assist companies and organizations with the implementation of new security structures, and it has been involved in an unprecedented outreach to industry around the world to offer guidance in these matters.

While all eyes are focused on the July 1 deadline, Capt. Schrinner maintains that much effort should be invested in the study and analysis of the costs, asking questions such as "Who's going to pay these costs?," and "How can we ensure that security costs are not unwitting contributors to, for example, competition between ports?" "After July 1, there will be a need for a lot more discussion on the long-term business implications," Capt. Schrinner said.

USCG: Capable and Flexible Always a cornerstone of protection.

the Coast Guard's current role, which is unique and ever-evolving, had its stature and responsibilities raised exponentially in the general public's eyes following the September 11 terrorist attacks and the resulting security status that has exposed maritime as a potential weak spot.

"Working in the Coast Guard Response to 9/11, and everything that followed, including the development of the new security rules and regulations," has been the most challenging, yet rewarding part of my career, Capt.

and served an initial tour of duty in Civil Engineering at Coast Guard headquarters.

Prior to his current assignment, Capt. Schrinner has served in various capacities at several units within the Coast Guard's Marine Safety and Environmental Protection program, and was twice assigned to the IMO. first as IMO Regional Consultant on Marine Pollution and Port Security, and later as Senior Project Officer at IMO headquarters in London.

Though the transformation of the Coast Guard since September 11 is profound, the service has always prided itself on its flexibility. The shrinking of government in the early to mid 1990s forced the Coast Guard to take more a partnering relationship stance with industry, a relationship which undoubtedly paid big dividends in the arduous task to create and implement the new security regulations.

"The old approach was to develop regulations not with the full input of the industry, and (in the mid-1990s) it was decided that we should change," said Capt. Schrinner. "At the time, the hot topics were commercial fishing vessel safety, uninspected vessels and cruise ships." From this grew partnership initiatives with the likes of the American Waterways Operators for tugboat and towboat safety, with the Passenger Vessel Association for small passenger vessels and with the International Council of Cruise Lines for cruise ships calling in the U.S. 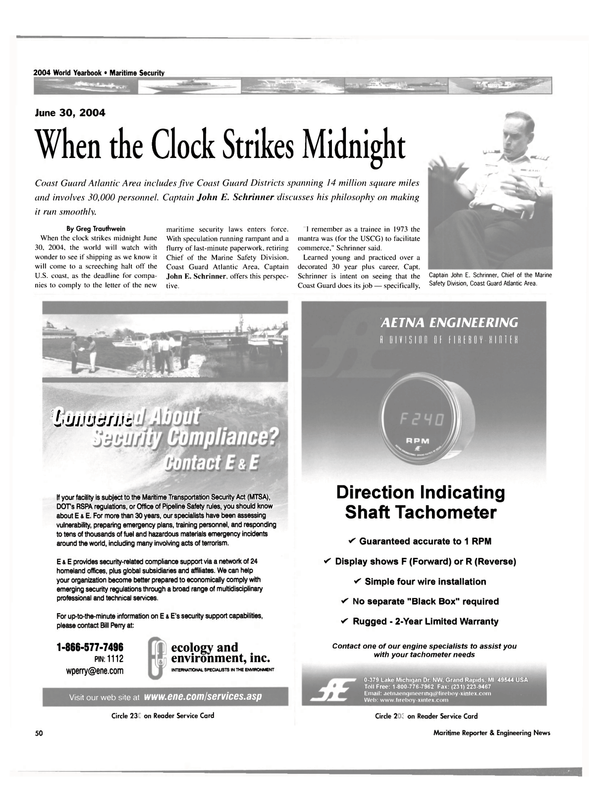 Read When the Clock Strikes Midnight in Pdf, Flash or Html5 edition of June 2004 Maritime Reporter