One hundred and twenty floating production systems are forecast to be installed over the next five years involving capital expenditure estimated to be $32 billion, according to the study The World Floating Production Report from Douglas-Westwood. (see chart previous page) "Annual capital expenditure on floating production systems is set to exceed $8 billion, with a predicted 84 FPSOs accounting for some 68% of investment over the next five years," said Steve Robertson, the study's main author. "The overall picture is one of strong market growth from 2004 onwards, with annual global expenditure in the FPS sector rising from an estimated $4.8 billion in 2004 to reach $7.8 billion in 2008. An expenditure peak is expected in 2007, when the annual spend is expected to reach $8.3 billion.

"In terms of the total market, and counting floaters of all types, we expect West African expenditure to lead at some $10 billion over the next five years. Although Brazil will see a strong surge in investment. North America will also see good growth and is likely to be in second place with a forecast spend of over $7 billion.

"The other main characteristic of the market will be the continuing shift to deepwater" said Robertson. "We forecast that 70% of the global spend will be on floaters moored in water depths of 500 metres or greater." "Over the past five years the deepwater market was dominated by the US Gulf of Mexico and Brazil which together accounted for over 75% of the total spend.

"The market distribution for the 2004- 2008 period is markedly different, the main change being the high growth in the value of deepwater activity off the west coast of Africa. We forecast Capex of $8.5 billion associated with deepwater FPS installations here, making the region the world's leading deepwater FPS theatre. All the other regions will also see increases in deepwater FPS activity, with North America's spend rising to $7.0 billion (31% of the global deepwater total), and Latin America's to $4.9 billion. Australia looks set to see its first deepwater deployment, with Woodside's Enfield FPSO installation forecast for 2006. Off Asia a total of nine installations — five TLPs, two spars, a barge and a FPSO — are forecast with a total capex of $1.7 billion." The World Floating Production Report uses information from The World Floating Production Database, a new information system from Douglas-Westwood. According to database editor. Georgie MacFarlan, "over the next five years we expect just 12 operators to account for 60% of the installations and almost 80% of the capex forecast worldwide for the 2004-2008 period. "Petrobras, with 13 installations forecast, is expected to be the biggest spender, followed closely by ExxonMobil, then ChevronTexaco, BP and Shell." 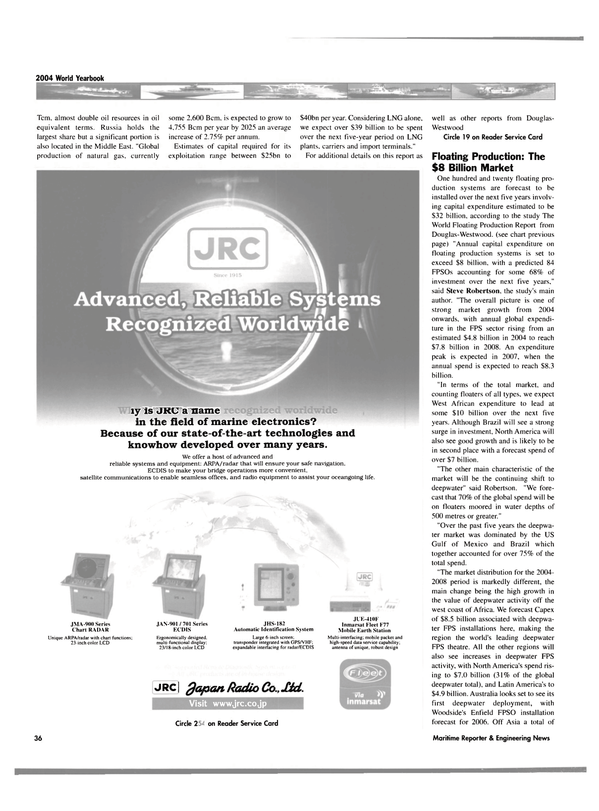