Wartsila Corporation received a contract to supply main diesel generating sets for a 19,500 dwt product/chemical tanker being built at Shanghai Edward Shipbuilding in the People's Republic of China. Delivery of the ship is scheduled in August 2005. Ordered by Sweden's Rederi AB Donsotank, the newbuilding is a double-acting tanker (DAT) which is optimized for efficient ice-breaking when going astern and for efficient sailing in open water when going ahead.

Propulsion is by a single electricallydriven azimuthing propeller drive. The 9.3 MWe diesel-electric plant is powered by four generating sets; three sets with Wartsila 6L32 diesel engines, each with a maximum continuous output of 2,880 kWe at 750 rpm, and the fourth set with a Wartsila 4L20 diesel engine of 685 kWe output at 1,000 rpm. The engines are scheduled for delivery from the Wartsila Vaasa factory in November 2004. The three Wartsila 6L32 engines will be equipped with common-rail fuel injection. The shipowner has adopted common-rail injection because of it enables the engines not to emit visible smoke under any operating conditions. 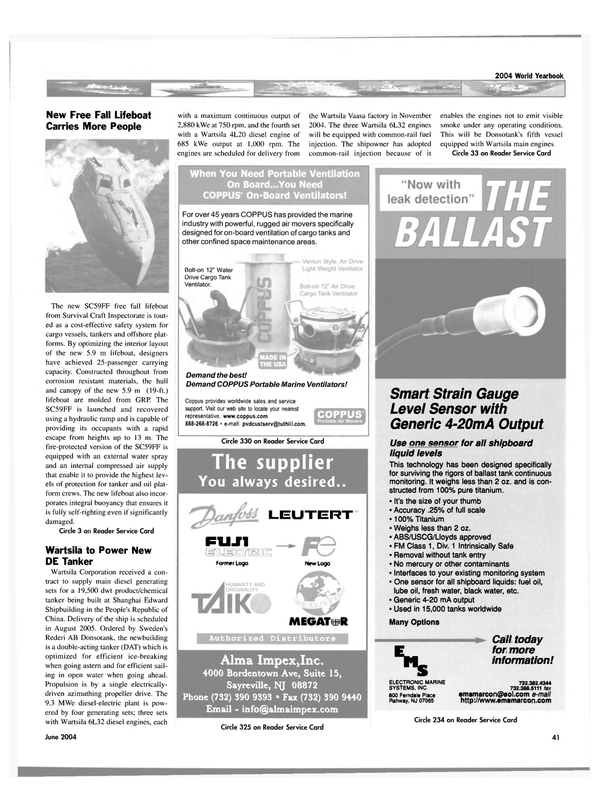