Bollinger recently gave new life to an old boat, the 150-ft. Guardian, originally named Gale B., which was built by Southern Shipyard in 1963. It was owned by Midland Enterprises and was part of a tug/barge unit with the hopper barge Martha B. Midland sold the barge to Moran about three years ago and the tug was on the market when it was acquired by Velvet Maritime. LLC. "It was in good shape with a good purchase price," said Andre Ledoux, president of Velvet Maritime. "It had marketable power that we wanted to upgrade to meet new regulatory requirements, practically new Lufkin gears, a good Detroit Diesel auxiliary engine package, good Markey deck equipment, a raised pilothouse and was not undersized or oversized for blue water operations." In choosing the yard, a long-term relationship helped seal the deal. "My dad.

Raymond Ledoux is a 33-year veteran of the marine business. He has had many vessels serviced at several of Bollinger's repair yards and has an excellent, longterm business relationship with Bollinger's Dave Marmillion. That, and Quick Repair's location on the Harvey Canal ... was very advantageous to us." Bollinger Quick Repair dry docked the tug and began the task of repowering.

The engine foundations were modified to accommodate two new owner-supplied Caterpillar 3606 diesels developing a total of 4640 hp that were mated to the boat's Lufkin gears with a ratio of 5.818:1.

The port & starboard tail shafts were reconditioned and ABS inspected. While other work was under way. Bollinger's propeller shop reconditioned the port and starboard propellers by fairing up all blades, welding nicks and cracks, checking and correcting pitch, grinding, balancing and polishing all blades.

Steering rudders, bulwarks and rub rails were cropped and sections of the port and starboard ballasts were renewed as necessary.

Sea valves were removed, inspected and replaced and the sea chest screens were replaced after cleaning and painting. 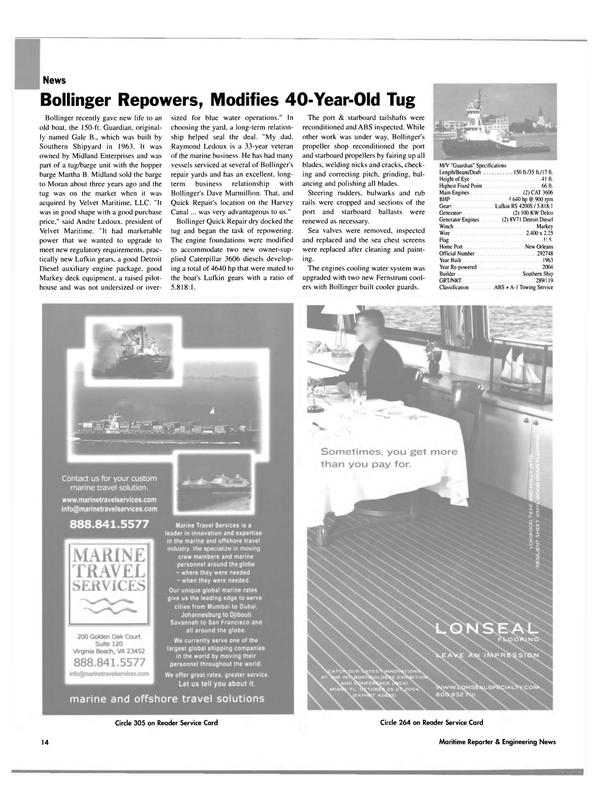