Such trade growth will necessitate an increased vessel building program.

Currently there are 59 vessels on order, but to match the expected development of trade volumes an additional 33 vessels are required through to 2010, 76 vessels in the period 2010-15 and 83 vessels up to 2020. These are some of the findings of the new report on the LNG sector, published by Ocean Shipping Consultants Ltd. The 163-page World LNG to 2020: Prospects for Trade & Shipping report forecasts that an extra $5 billion of additional newbuilding vessel investment is required before 2010 and an additional $24.1 billion through to 2020. Trading patterns are set to change significantly over the next decade as new markets and suppliers emerge, vessel capacities are increased and the spot market grows in prominence.

A summary of some of the findings of this major new study, which analyses in detail the expected development in all aspects of the world LNG industry, follows.

LNG Trade & Imports to 2020 • Global LNG trade is set to increase by an average approximating 7.6% over the near-term, with a slowing to 5.4% in the second half of the decade. In the final part of the study period, average annual growth is forecast at around 4.9%.

• In early 2004, India became an importer of LNG however there are currently no other Asian LNG markets.

Large-scale imports are set to follow the start up of terminals in Thailand, the Philippines, Singapore, Myanmar and New Zealand. By 2010 the annual import total for these markets is forecast at almost 21 bcm, rising to 38 bcm by 2020.

LNG Export Suppliers to 2020 • SE Asian exporters are set to continue to dominate world LNG trade movements - accounting for approximately 84 bcm in 2010, rising to over 97 bcm by 2020 (from a 2003 level of 67 bcm). This expansion is based primarily on increased liquefaction throughput at Indonesian and Malaysian plants, with overall growth approximating 45%.

• Exports from West Africa are set to increase - primarily from Nigeria, but also including volumes from Angola and Equatorial Guinea in the latter part of the study period. 3 of 5 • Export levels of approximately 19 bcm by 2010 and 46 bcm by 2020, are projected for C/S America, where current export volumes approximate 5.6 bcm, but are due to increase markedly through the ongoing expansion of the Trinidad project, and the commencement of LNG exports from Venezuela later this decade.

• Elsewhere, the Sakhalin project in eastern Russia is set to witness extensive LNG export volumes towards the end of the study period as will the Norwegian LNG project.

LNG Fleet & Shipping Requirements to 2020 • Currently there are 59 vessels on order, which represents a total cargo capacity of 8.2 million cubic meters (mem). This represents an additional 46% of LNG capacity due to commence trading over the next 2-3 years.

• Given the age profile of the current fleet, the volume of vessel scrapping over the near-term is likely to continue to be low, although there will inevitably be higher levels of vessel demolition later in the study period.

• A total of 4.6 mem of new tonnage (in addition to that currently on order) will need to be ordered and delivered in the second half of the current decade to match the expected development of trade volumes and patterns over the interim period. For the 2010-15 period, a total of 10.5 mem of new fleet capacity will be required, with 11.5 mem needed for the 2015-20 period. For the future study period as a whole, a total of 26.5 mem of new LNG capacity will be required, in addition to the 8.2 mem of new capacity currently on order at Asian and European yards.

• There will be a requirement for the equivalent of a total of 92 large vessels (of around 138,000 cu.m capacity) to be delivered in the period to 2010, with an extra 76 vessels in the subsequent half- decade and an additional 83 through to the end of the study period.

With 59 vessels already on order, this implies a need for 33 new orders to be delivered in the remainder of the current decade, and 159 vessels between 2010 and 2020.- • At current newbuilding prices, the forecast vessel requirements translate to $5.1 billion of extra new orders to be placed up to 2010, and a further $24.1 billion in the following decade.

• The current orderbook will be sufficient for the anticipated trade expansion over the near-term, with an inevitable time-lag between vessel completion and full active employment resulting in vessel supply exceeding demand by 2-3 mem over 2005-07. However, a shortage of 1.8 mem vessel capacity is anticipated by 2009 and a massive 4.3 mem by 2010 • If LNG supplies were cut off - due for example to terrorist actions - from a leading exporter, the effect could be a massive boost in vessel requirements, due to the required re-routing of supplies from other sources. In the case of Algeria, this could be the equivalent of 28 extra vessels at the present time, rising to 33 vessels by 2010. However, a more likely scenario will see the European pipeline network increase capacity in the near-term and thus reduce the extra number of vessels required to transport LNG to the European markets.

For more information on the report, e-mail [email protected] 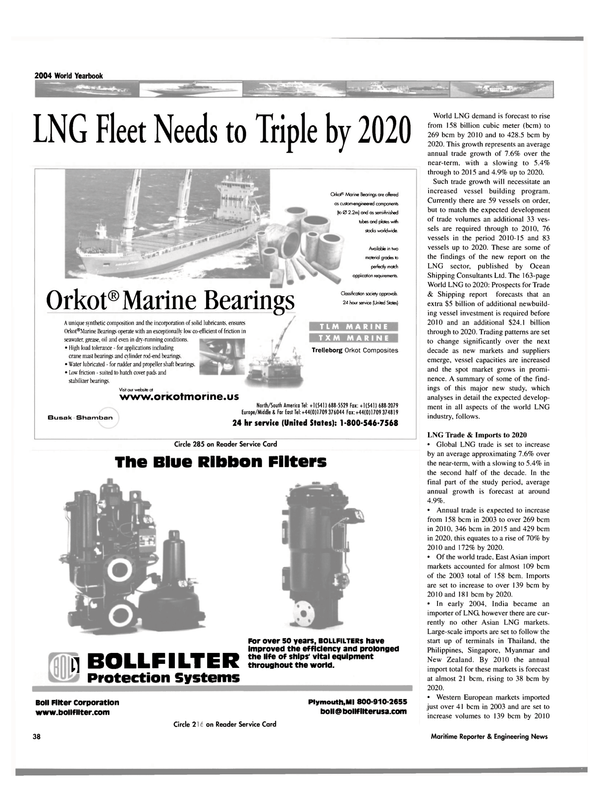