Crowley Marine Services refloated the passenger ferry Le Conte, which had run aground about 30 miles north of Sitka, Alaska on Monday, May 10. Crowley, under contract with the Alaska Marine Highway System, floated the Le Conte off Cozian Reef. The salvage team made internal and external surveys and the Le Conte was towed to the Ketchikan Ship Yard by the tug Chahunta with Crowley's salvage vessel, the American Salvor, escorting.

The 31-year-old ferry was transiting from Angoon to Sitka with more than 100 passengers and crewmembers onboard, when it struck the reef located in Peril Strait. All of the passengers were successfully evacuated by the Coast Guard and local private watercraft immediately following the grounding with only a few people sustaining minor injuries. The vessel has an approximate 50-foot gash down each side of the keel.

After conferring with Alaska Marine Highway System officials and the operators of the LeConte, Crowley immediately dispatched an assessment team, including a project manager and senior naval architect, to the scene from San Diego where they had just completed the successful salvage of an F-14 fighter jet that went down off of Point Loma.

Crowley worked closely with Marine Response Alliance (MRA) partner Titan Maritime, LLC, which provided the salvage master and additional support equipment. Crowley dispatched the American Salvor, loaded with additional personnel and equipment, to the scene last week to provide the support base for the overall salvage effort. That vessel arrived Saturday morning. Crowley's Incident Management Team was mobilized and will remain on site at the command center in Juneau until the project is complete. Prior to extracting the Le Conte from the reef, all fuel, with the exception of a small reserve needed to run generators, was removed from the ferry, as were the automobiles on its car deck. 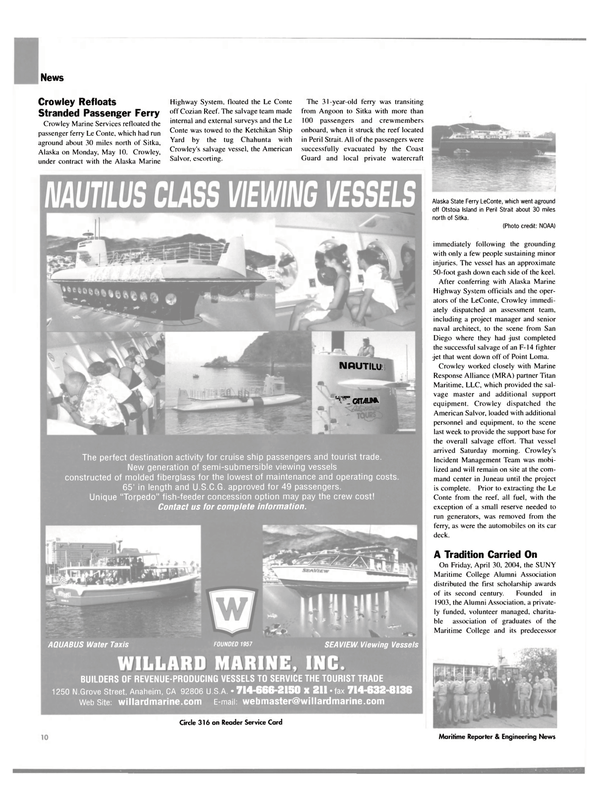