Increased interest in ice-classed tankers has been fostered to a great extent by the emergence of former Soviet Union (FSU) states as important players in the oil market. The FSU collectively, but with particular reference to Russia, Azerbaijan, Kazakhstan and Turkmenistan, has emerged as the engine of global oil supply growth. Since 1996, FSU output has grown by around 50-percent, approaching the highs achieved during the Soviet regime. The fact that a substantial part of the production has been made available for export has key implications for sea borne transportation logistics and opportunities. Special challenges are presented for tanker design and operations because of the harshness of the environments in which the trade has to be conducted.

According to Lloyd's Register, shipments from the northern Baltic are set to double over the next five years, with the accent on routings via the port of Primorsk. The western Russian port was the outlet for 12-million tons of oil in 2002. "This could become 90- million tons in five years' time, maybe up to 135-million tons if local plans are successful," reported LR, which has considerably raised its profile in the icestrengthened tanker category in recent years. Access to and from Primorsk means overcoming winter ice infestation, typically from November or December through March, and optimum vessel size is around 110,000- dwt, due to draft limitations in the port and in the Danish Straits. Considerable reserves exist in Siberia, and anticipated large-scale exploitation could have a pronounced effect on Arctic shipping activity. Industry sources believe that the port of Murmansk, blessed with freedom from ice throughout the year, despite its location within the Arctic Circle, on the Barents Sea, will come to play a pivotal role in the export of northern Russian crude. It is foreseen that oil will be worked into Murmansk from the ice-bound regions to the east using tankers from about 20,000-dwt potentially up to Aframax size. The demand for such tonnage would be influenced in future years by the anticipated development of the pipeline infrastructure. Onward movements from Murmansk could be handled by vessels as large as 300,000-dwt VLCCs, assuming the requisite investments are made in terminal facilities.

LR said the industry had witnessed a rush to order ice-reinforced tankers in 2003, driven mainly by the expected growth in the export traffic via Primorsk, and so far largely entailing high ice-class tankers of Aframax size. Not only the scale of the traffic, but also the distribution and emphasis in shipment destinations, such as short-haul to western Europe and long-haul to the USA and elsewhere, will impact on the nature of vessel demand. In the event of Primorsk-routed exports to the U.S. reaching 30-million tons by 2010, the traffic would equate to 35 Aframax tankers. A contemporaneous export volume of 75-million tons to the U.S.

by way of ice-free, albeit low-temperature Murmansk, would equate to 32 VLCCs.

A flagship project for the society was the classification of Fortum Shipping's 106,000-dwt, Sumitomobuilt Tempera and Mastera. designed to provide yearround service to the owning group's Finnish oil refineries, and distinguished by 1A Super Ice Class notation, podded electric propulsion, and embodiment of Kvaerner Masa-Yards' double-acting design concept.

The double-acting principle, involving stern-going navigation in heavy ice, is being considered as a possible solution to shipping requirements for the Northern Sea Route passage through the Russian Arctic in the European Commission's ARCOP (Arctic Operational Platform) research project. A total of 21 organizations from Finland, Germany, Italy, the Netherlands, Norway, Russia and the UK. including LR, are participating in the study, focused on the transport needs associated with the development of natural resources in Russia's Arctic regions. It is thought that the probable application for the ARCOP ship design concepts will be shuttle or short-haul tankers for the transfer of oil to Murmansk for transhipment. 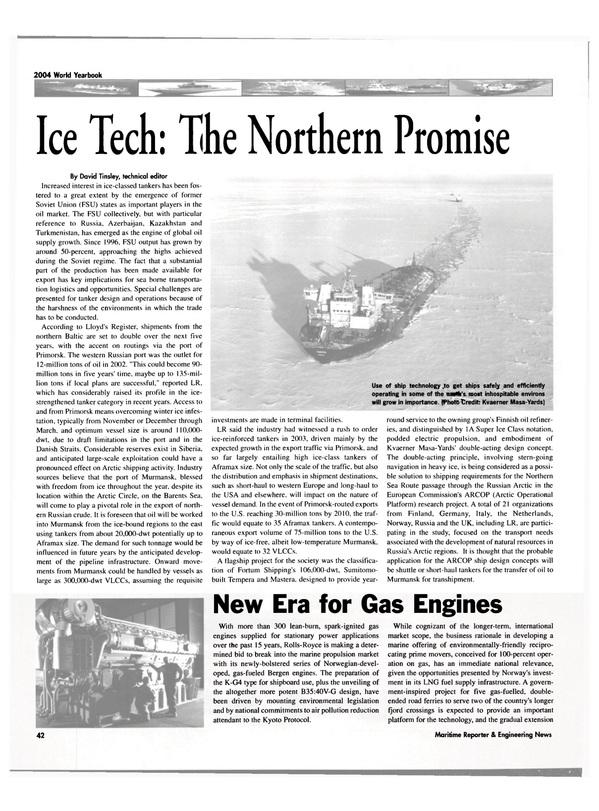