Appropriate, isn't it, that a man name Flood made his mark on the world painting nautical scenes. Born on the fourth of July in Philadelphia, James Flood has been sketching and painting from the time he was four.

His early years embody the stereotypical mold of the artist type — restless and distracted at school, doggedly pursuing his craft and developing his talent, often to the dismay of family. His dedication to the subject was instilled in him at a young age, and was a passion that had outlets beyond the paintbrush and canvas. Flood recalls with joy memories of a young boy who would meticulously create and "sail" his very own fleet of motorized ship models. "I've had a lifelong fascination and attraction to water," he said. As a young man he served in the military, joining the Navy in 1967. Flood first served on Laffey, then aboard Wright, and then as quartermaster on the U.S.S. New Jersey. The latter, he admits, was his dream come true. "I felt as though I had been let loose on one of my model ships," he said.

Captured on film from a recent visit to the U.S.S.

New Jersey, a reminiscent Jim slouches against the wall of the fifth deck room where he had formerly spent much of his free time painting and playing the piano. Apparently, not even a war could deter Jim from his passions, and the image from one of his works painted during this passage was used as the end covers for the U.S.S. New Jersey history book. The painting itself remains at the naval Historical Museum in Washington, D.C. Following the Navy, Flood enrolled in college on the GI Bill to study art, but ironically, it was this experience that drove him away from art for some time. "They told me I was trite because I painted ships," he said, noting that the political and hippie movements of the time inspired an abstract brand of art that simply was not to his liking.

Flood finds inspiration among his colleagues, and specifically notes the works of Carl G. Evers, Bill Muller. Van de Velde and Stephen Card. "Carl Evers is my 'sea daddy' ... I've always been fascinated with how he handled the sea: there was nobody like him." He counts Van de Veld's "HMS Resolution in a Gale" as one of his favorite paintings of all time. His work is on display at the Naval Institute in Annapolis, the Wiley Post Museum in Oklahoma City, the Olympia Memorial in Philadelphia, the battleship Alabama in Mobile, the Biscayne Bay Harbor Pilots Association in Miami, the Washington Historical Museum, the Queen Mary, the Mystic Seaport. The U.S.S. Texas, the U.S.S.

New Jersey, and the Historical Museum of South Florida, as well as on the bridges of many cruise liners.

His art has appeared in the Naval Institute's Naval History Magazine. Steam Boat Bill, the Journal for the Steamship Historical Society of America. Pictorial Histories, Sea Classics Magazine, Preston's, and Military History Magazine. Flood's clients include the former governor of New Jersey, Christie Todd Whitman, as well as actor Sylvestor Stallone and tennis champion Gardner Mulloy. Singer Rod Stewart has collected most of Flood's works in either giclee or lithographic format. His paintings have been used in the sets of a 20th Century Fox film. Speed Two and at a Memphis Exhibition on the Titanic in 1997, as well as on the set of Frasier. For more information, e-mail him at [email protected] 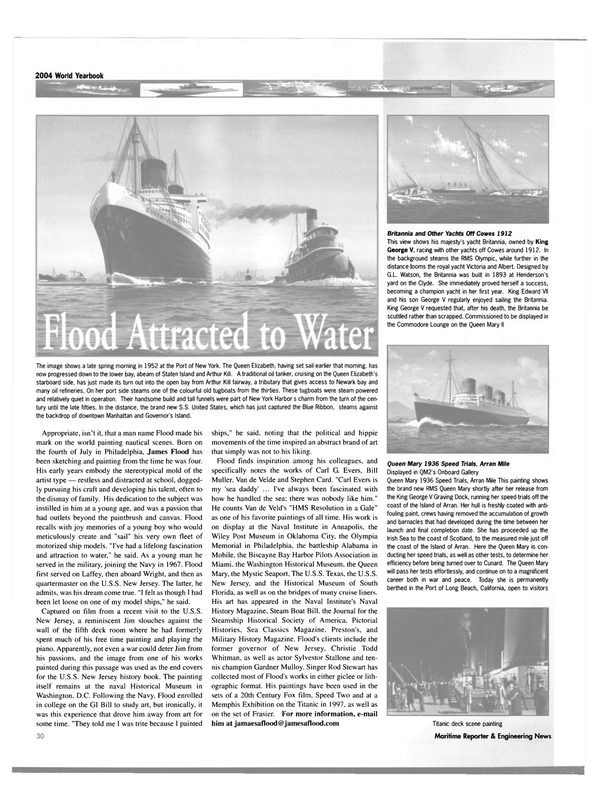