By all accounts, Bahrain-based ASRY (Arab Shipbuilding & Repair Yard) is managing to buck the trend of falling revenues and create an optimistic story for the Middle East ship repair industry. It is also resisting the regional trend of falling revenues and increased losses with a 6% increase year-on-year in revenues as well as staying profitable, according to the yard. The secret to the yard’s success is actually no secret at all and has been reported previously in these pages. According to Chris Potter, ASRY Chief Executive, key to recent success has been a series of three key diversifications now coming to fruition
“Due to the fact that ship operators repair schedules and scopes are still being kept to a minimum, 2013 will continue to be challenging for any yard that relies solely on ship repair,” Potter said. The biggest challenge in the ship repair industry in the Gulf is to expand its market share despite a persistent depression in the industry, while simultaneously responding to more competition from new yards opened in the past two years. Diversification in the foreseeable future is going to be imperative if repair yards are going to stay competitive – gone are the days when relying solely on ship repair was enough.”

Striking Out Offshore
The first major diversification for ASRY was ASRY Offshore Services – a division dedicated to rig repair, which accounted for approximately 44% of ASRY’s revenues in 2012, and is directly responsible for the yard’s unusually buoyant position. The second diversification was ASRY Energy Division, launched in late 2011, which is responsible for the production of specialized barges that will form the basis of unique Floating Power Plants, designed by an ASRY joint venture, ASRY-Centrax. Two hulls for these barges have been completed and launched – making ASRY the first and only Middle Eastern yard to diversify into the power generation field. Finally, the third diversification was ASRY Consulting Services (ACS), launched in 2012, which is a team of dedicated engineers, naval architects and senior yard managers that draw on ASRY’s experience to consult on a range of yard-based subjects, including yard operations and management, installation of ballast water monitoring systems and low-sulphur emission systems. ACS is the fastest growing division in ASRY with more than 18 full-time employees, and a full new business pipeline.
By branching out into these new specializations, and multiplying revenue streams, this year ASRY is not only defying the market, but also graduating from a ship-centric repair yard, to a full-service marine optimization complex.
Simultaneously, the yard has continued to invest, with an ambitious $188m expansion project now entering its final phase with the completion of a repair quay wall that brings the yard’s repair berth space up to 4km. Along with four state-of-the-art tugs being built in-yard, an offshore layout area, new sewage treatment plant, new desalination plant, and further infrastructure improvements, the company has had the courage to aggressively invest in a weak market and has been rewarded with a market leading position. 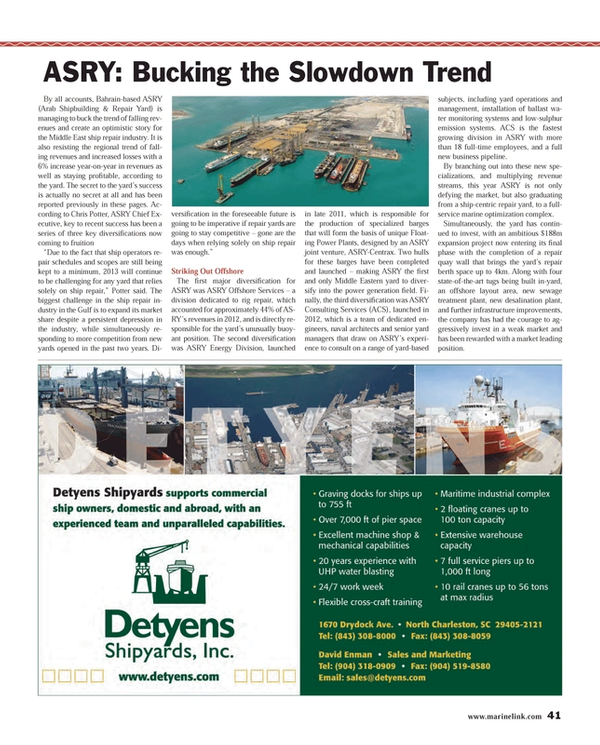