By Jim Rhodes and Frank Soccoli

While there are indications that the shipping industry is starting to emerge  from the doldrums of the last six years, signals remain mixed.  Moore Stephens reported in June that shipping confidence has risen to its highest point since 2010. Indeed, there are signs of a new wave of speculative ordering of new tonnage, propelled by bargain-basement prices from shipyards desperate to fill slots and a reported influx of capital from private equity sources. A primary driver for the surge of orders is the improvements in fuel efficiency of new ship designs over older ships.  On the other hand, in the same month, Moody’s Investor Service issued a negative report for shipping, predicting continued depressed freight rates for at least the next 18 months due to persistent over tonnage in most segments. Moody’s estimates that aggregate industry Earnings Before Income Tax, Depreciation and Amortization (EBITDA) for publicly held shipping companies will decline by 5-10% this year.
The mix of anemic shipping demand, over tonnage, low freight rates, rising fuel costs, tight credit from marine bankers and high costs of environmental compliance to meet new regulations makes for a poisonous cocktail to shipowners. The fall into receivership of STX Pan Ocean, South Korea’s largest bulk ship operator, is a sign of the times. It’s not likely to be the last. Several other shipowners are said to be insolvent and teetering on the verge of bankruptcy. Interestingly, there are reports that certain German banks are offering high-interest “payday loans” against the scrap value of older vessels as a last resort for distressed ship owners who have exhausted their working capital and are unable to obtain financing to continue operations.
The delivery of the first Maersk giant Triple E 18,000-teu containership, coupled with rumors that other container lines are designing even larger ships, into a market already overcrowded with too many ships chasing too few cargos, may be a big gamble that will pay off enormously in terms of market share, but will certainly not help ease the persistent over tonnage.  The crystal ball may be murky, but one thing is clear. Shipowners must reduce the cost of operating ships to survive in the coming years.
The first place to start is with fuel, which accounts for 40-50% of a vessel’s operating costs. As the Emission Control Areas (ECA) continue to expand, that percentage is likely to rise even higher due to the higher cost of low-sulfur fuels. Ship owners have adopted numerous methodologies to reduce fuel consumption, such as slow steaming, advanced hull coatings, better weather routing and asset management strategies, which have yielded notable benefits. Shipowners are increasingly looking to alternative fuels or hybrid propulsion systems to reduce their rising fuel bills. Liquefied natural gas (LNG) offers considerable benefits over other fuels meeting the ECA requirements for reduced emissions.

Focus on LNG
LNG as a marine fuel is still in the early developmental stages. At the beginning of the year, it was reported that there were 37 LNG-powered vessels in operation (not including dedicated LNG carriers that use “boil-off” gas for ship propulsion). That number will rise to 65 in the next few years based on current orders. A recent DnV study projects 1,000 LNG-fueled ships to be in service by 2020. Most of the current LNG- powered ships are ferries and short-sea carriers, operating on relatively short fixed routes in regions where LNG bunkering is readily available, mostly in Scandinavia. The potential benefits from LNG are impressive. LNG can reduce SOx emissions by 90-95% and CO2 by 25%, according to industry estimates. In the U.S. market, LNG currently sells for about one half the price of other ECA-compliant fuels. There’s plentiful supply of untapped LNG deposits that are now being developed, especially in America, Russia, Qatar and Australia. Even after the increased costs of extracting, transporting, storing and bunkering LNG are factored into the equation, LNG will almost certainly continue to maintain an attractive price advantage over conventional marine fuels.
On the other hand, it is more expensive to build new LNG-fueled ships or to convert existing ships. One study estimates the cost for a new LNG-powered ship to be about 20-25% higher than an equivalent vessel with traditional fuels. Payback periods for conversion to LNG are said to be three to seven years. This analysis is based on the assumption of an adequate LNG bunkering infrastructure in place at ship sailing ports.

Barriers to Entry
There lies the rub. The biggest barrier for widespread adoption of LNG at this stage is the lack of a worldwide bunkering infrastructure. Other inhibiting factors for LNG include a lack of LNG-specific training for shore and ship-based staff, as well as the absence of international standards for bunkering with LNG. There are also concerns about methane burnoff during bunkering, causing CO2 release into the atmosphere and increased engine knocking from varying methane number in LNG fuels.
Despite the challenges, a number of forward-looking shipowners are already placing their bets on LNG.  Tote, Inc. rocked the industry when it announced it was ordering two new LNG-fueled containerships for its Jones Act fleet from NASSCO, as well as converting two of their existing ships to LNG, citing a 40% increase in fuel costs to meet the ECA requirements. Interlake Steamship Corporation has likewise announced a plan to convert its Great Lakes fleet to LNG, and Rolls Royce announced at Norshipping a contract with Bergen Tankers to convert a product tanker to LNG engines. DNV has reportedly given approval in principle to the design of an LNG-fueled 14,000-teu containership in a joint industry project involving Daewoo Shipbuilding, CMA-CGM and Bureau Veritas. A CMA-CGM spokesman was quoted in the press as saying the first ship could be built within five years, assuming the ready availability of LNG bunkering.  Fuel suppliers and ports are also working to meet the demand for LNG bunkering facilities. Shell is said to working to provide LNG fueling terminals in the Great Lakes to support the converted Interlake ships. Other companies, including Maersk Lines Ltd. and Crowley Maritime are also working to develop bunkering infrastructure on a larger scale. Stockholm has demonstrated successful ship-to-ship LNG bunkering, and Antwerp recently bunkered an LNG-powered barge by truck.  Antwerp is also said to be putting out tenders for an LNG bunkering vessel. While ship-to-ship LNG bunkering may be the best short-term solution, there is a need for shore-based bunkering facilities at major seaports around the world to sustain widespread adoption of LNG as the marine fuel-of-choice.

Focus on Fleet Optimization
The 2013 SHIPPINGInsight Fleet Optimization Conference will provide a forum for examining the challenges, solutions and best practices for reducing operating costs and improving ship efficiency. The second-annual conference will take place in Stamford, Connecticut, October 22-24, 2013. The agenda includes a solid list of moderators and speakers, including senior executives from 15 major shipowner companies. The keynote speakers are Anthony Chiarello, president and CEO of Tote, Inc., and Yasushi Nakamura, executive vice president of ClassNK.
Given the intense industry focus on the potential benefits of converting to LNG, a dedicated LNG workshop is being added to the Fleet Optimization Conference this year. It will take place immediately following the main conference, and is open to all registered delegates. The workshop will take the form of a less formal round-table discussion including shipowners, classification societies, regulatory bodies, engine manufacturers, bunkering companies and other industry experts to take a deeper look into the issues, challenges, solutions and best practices for LNG propulsion.
To view the complete agenda and register for the 2013 Fleet Optimization Conference, go to
www.shippinginsight.com 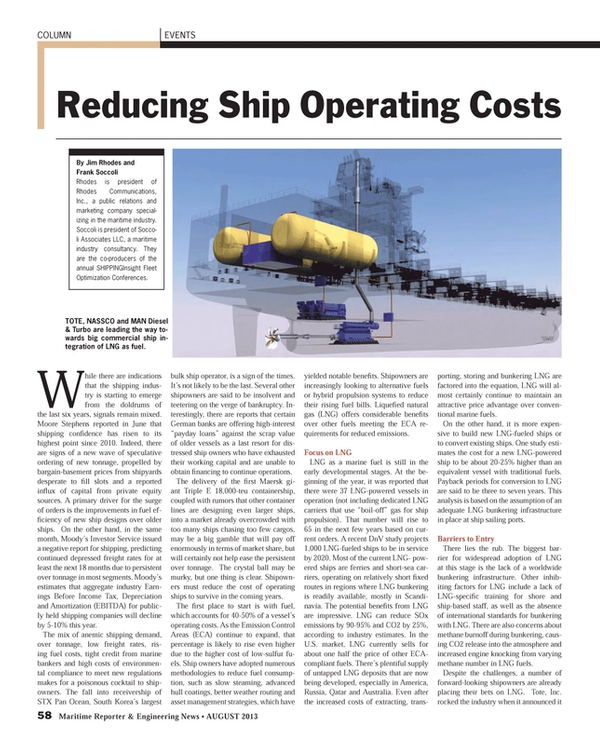