Vigor Industrial has emerged as a leading consolidator of shipbuilding prowess on the U.S. West Coast, and the company continues to invest in new capability and infrastructure.

“Over the past year there has been a marked increase in vessel fabrication opportunities of all kinds, including for ferries, tugs, barges, and fishing vessels,” said Vince Piscitello, VP of Sales, Marketing and Business Development. Earlier this year Vigor signed an agreement to build the largest floating drydock in the United States, and construction is currently underway. The new drydock will allow Vigor to service larger ships, up to and including any of the cruise ships operating on the West Coast and Military Sealift Command’s Lewis and Clark-class dry cargo/ammunition ships.  Vigor’s Alaska Ship & Drydock is also underway with a number of improvements in cooperation with the Alaska Industrial Development and Export Authority and other partners. Less than a year ago, the Ketchikan yard opened a new 70,000 sq. ft. ship assembly hall, and a new $10 million steel fabrication shop is currently in the works.

While investment in facilities and machinery is essential in today’s modern shipyard, leaders in the field such as Vigor recognize the value of workforce development and retention, and a central value at Vigor is “Jobs Matter.” Much more than a simple slogan though, the shipyard launched two initiatives: Harbor Island training center: an industrial skills training center at its Seattle shipyard; and Pathways to Manufacturing, where Vigor provided seed money for a pilot program that helps high school students learn both in-demand industrial manufacturing skills in addition to “soft skills” such as job interview techniques and public speaking.

A few of the recent vessels to grace the building and repair ways at Vigor facilities include: 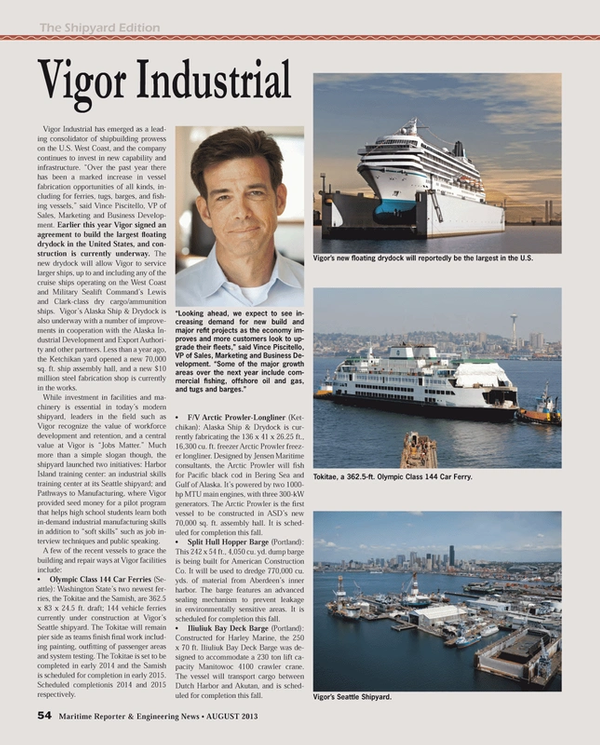