CPPs have been developed and produced on the Baltic coast of Germany since 1962 – initially in Rostock, and then in Wismar from 1964. The first units were manufactured for 86 freezer-trawlers of type Tropik for the Soviet Union. Four additional types were produced for GDR fishery vessels. The first years of controllable-pitch propeller production in Wismar centered on systems with a power rating of 1,930 kW for 199 freezer-trawlers of the Atlantik type, and in total, 230 controllable-pitch propeller systems were delivered to the end of 1969. From 1970, CPP systems of the second generation were implemented, with simplified kinematics and a reduction in the number of parts. A total of 195 vessels of the type Atlantik Supertrawler were fitted with this propeller (2,850 kW, 3.4 m diameter).

In 1975, systems with an input power of 8,250 kW (5.3 m diameter) were manufactured for bulk carriers, and later also for Multi-Bulk Container freighters, for delivery to the Federal Republic of Germany.

In 1999, Schottel acquired the then WPM Wismarer Propeller- und Maschinenbau GmbH and has built on the existing expertise in the development of controllable-pitch propellers. Major developments came from the new parent company in western Germany. A state-of-the-art manufacturing facility with highly qualified employees has been built up, and the company’s portfolio now includes controllable-pitch propeller systems of up to 30 MW, used in wide ranging applications, from conventional freighters to fast ferries and powerful tugs. In 2012, five-bladed controllable-pitch propellers for fast vessels were brought onto the market, designed for applications with requirements for a lightweight construction in combination with high power ratings, for example military vessels or yachts.
They are based on the proven design principles of the standard systems but offer an even higher power density and a weight reduced by up to 15 percent while retainingreliability and robustness. The propellers have been optimized in accordance with the latest state of the art in hydrodynamics and structural mechanics and are characterized by improved efficiency, reduced pressure pulses and structurally optimized hubs. At the same time, the simple and maintenance-friendly design and functional principle of the classic Schottel CP propeller systems have been retained.
Schottel SCP controllable-pitch propeller systems of the 5-X series are available with power ratings from 1,000-20,000 kW. 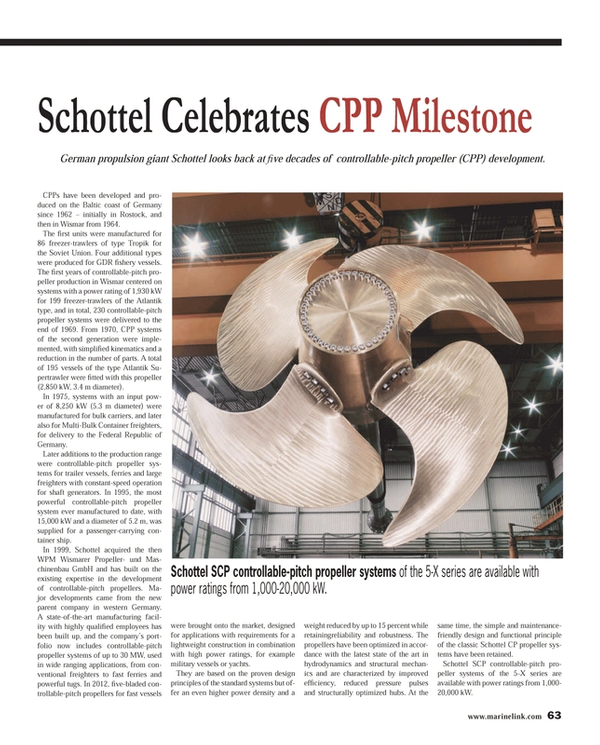