Gulf Copper’s Port Arthur facility earlier this year completed a unique 10-month project to build the three massive buoys for SOFEC, buoys which will be used to offload liquid product such as diesel or gasoline in places lacking deepwater ports.
In total Gulf Copper received two separate contracts to build a total of five CALM buoys (3 and 2), for SOFEC. The order is of particular interest from the yard’s view as it is a new line of business for the company.
The massive buoys pictured here are Catenary Anchor Leg Mooring System, or CALM buoys, and SOFEC is a global leader in the supply of CALM and SALM terminals globally. Each unit weighs in at 230 to 260 tons (depending on the number of heads) and the floating hull of the buoy is tethered to the ocean floor offshore of a storage or processing facility. “SOFEC Inc. has manufactured and delivered a total of 44 CALM buoys to date,” said Claude Signori, Project Manager, SOFEC, when Maritime Reporter checked in with him last month. “These have been delivered and installed evenly between Latin America, the Middle East and South East Asia. The demand for CALM buoys has been fairly steady since the early 80s and is expected to remain steady for the foreseeable future.  Prior to the arrival of the offshore terminal, vessels were obliged to moor to Jetties in a harbor/port.  This would mean the construction of Jetties, the addition of transfer hoses or mechanical loading arms and in most cases the expensive dredging and upkeep of channels to accept the medium to very large vessels used for the transport of liquid hydrocarbons.”

CALM
CALM refers to Catenary Anchor Leg Mooring, and the CALM Buoy is a floating hull with a rotating head to which vessels can moor. The CALM buoy falls under the category of a Single Point Mooring (SPM) typically with a turntable positioned above the geostationary hull mounted on a roller bearing. Flexible large bore rubber hoses are used to connect the subsea pipeline to the hull. Similar floating hoses are employed when connecting the buoy to a tanker prior to transferring liquid hydrocarbons. Central to the main bearing is a product swivel which allows fluid to transfer between the geostationary hull and rotating turntable while the moored vessel weathervanes. The primary benefit of a CALM Buoy over a SALM Buoy is ease of maintenance. The mechanical U-Joints of a SALM are removed, and the fluid swivel is located above the water surface. The vast majority of Marine Terminals installed since the mid 1990s have been CALM Buoys because of these design improvements.
While the technology is proven and accepted, demand can be tricky to gauge, according to Signori. “We have seen various increases and decreases that are very difficult to predict.  These marine terminals are not market followers since delivery from concept can be 24 months or more.  What we do see is a high demand for new refineries and power plants in remote regions where ports are not part of the local infrastructure.  It is much less costly to develop a system using a marine terminal than building a new port or harbor.”
One advantage of the CALM buoy for the operators is the ability to locate these terminals offshore in a suitable depth of water with an easy installation of the buoy connected to shore to via a pipeline.  Another advantage, the environmental signature of an offshore installation is considerably less than a shore side terminal.  These two factors, coupled with an expected operating life of 30 plus years will continue to drive the future market, according to Signori. “Also, as developing countries rely on importation of crude or refined product, we continue to see an increase in demand.  For instance, as India invests in relative remote areas with refineries for their internal needs, the supply of marine terminals to import the feedstock has increased.  The same will be true of power plants that rely on liquid hydrocarbons for operation.”

A Partner in Gulf Copper
The project was a first for Gulf Copper, and according to Eric Callarman, Gulf Copper & Manufacturing Corp., it presented its fair share of challenges along the way. But he credits SOFEC, their technical expertise, experience and willing to partner to resolve issues as they arose as helping the yard to build its best practices even further.
According to Callarman, challenges started with the schedule which demanded a 10-month production deadline. In addition, it was the biggest fabrication project to date for the Port Arthur facility, and construction far exceeded simple fabrication, involving electrical, mechanical, critical machining and FAT testing. “With the help of our client, we raised our level of quality to meet project requirements. We actually look forward to utilizing this new level of quality on projects moving forward.” For example, “we originally thought that the fabrication of the CALM Buoys was going to be the most difficult and time consuming portion of the project but as we started the mechanical and integration portion of this project, we quickly learned that this was actually the most difficult and time consuming.” The final challenge is one familiar to most any ship construction facility on every continent: the location and hiring of qualified craftsman to execute the contract. In total Gulf Copper added 50 positions for this project alone. But by the account of the client, all challenges were met.
“SOFEC is very pleased with Gulf Copper’s performance,” said Signori. “The quality is very good, and financial performance solid.  Some of the mentioned challenges appeared in the form of schedule challenges, but these were overcome with hard work and more than a couple long days.  Nonetheless, the project met both the Owner and SOFEC expectations.
“We were interested in contracting this work on the Texas Gulf Coast,” Signori said. “We were sure the proximity of SOFEC in Houston to a Gulf Coast fabricator would provide an advantage.  And given that the local fabrication would support the end user with regards to transportation and importation obligations at the final destination, it was an easy decision to try to work locally.  The difficulty would be to choose the right partner. SOFEC selected Gulf Copper based on their solid ship repair and fabrication experience,” Signori added. “SOFEC audited the yard and came away certain they could do the work.”
Two additional CALM buoys are currently being fabrication at Gulf Copper and will be delivered in December 2013.  “There is every reason to believe we will work with Gulf Copper on more projects in the future,” Signori concluded
And while the business value of winning this contract and building these complex systems is self evident, Callarman sees a value to the project that will extend to and through the work of Gulf Copper. “The biggest lesson learned from this project is that we thought we were a very good fabricator, and we are, but this project exposed areas of needed improvement,” said Callarman. “Everyone at Gulf Copper, and on this project team, really got on board with this project and we made many improvements throughout this project. We are really excited by the improvements that we made and what this will do for Gulf Copper moving forward.” 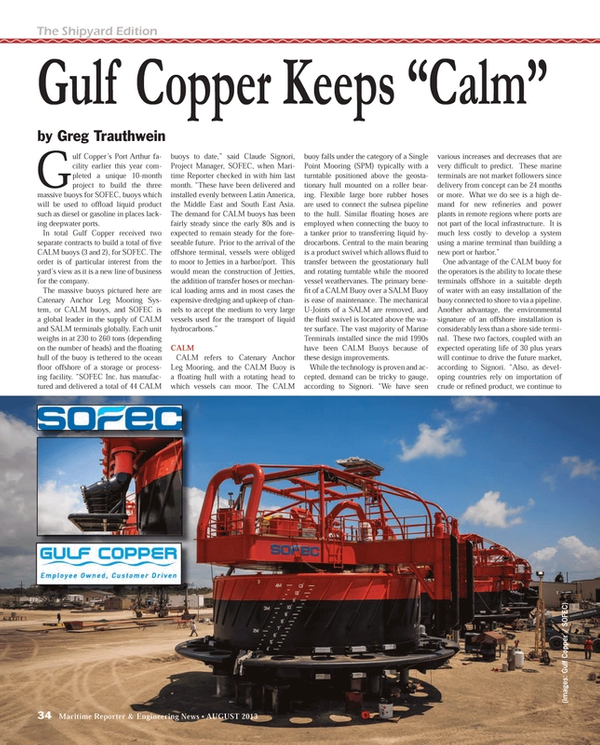