Book Review: “After the Galaxy”

Four men huddled on the bow of the burning, 190-ft. fishing vessel Galaxy as the crippled boat foundered on one of the world’s cruelest oceans. Captain Dave Shoemaker was seriously hurt. After the backdraft explosion, he made several desperate attempts to enter the smoke-filled wheelhouse, find a radio and issue a mayday call. Each foray left him puking and gasping, smoke searing his lungs and contact with the steel bulkheads charring his flesh and igniting his clothing. After each attempt, he climbed through an escape hatch onto the roof of the wheelhouse, gasping for air. When he regained the ability to speak, he exhorted his crew in a desperate effort to quell their rising panic.
Seventeen men and one woman fled the inferno in the house and mustered atop the shelter deck at the stern. Clad in t-shirts and sweatpants or pajama bottoms, many in stocking feet, they clustered helplessly in the sub-Arctic wind and watched the advancing flames. Protected only by a railing with three steel bars, they would have been 34 feet above the water at the dock. As the vessel surged over the crest of a 20-foot sea, they soared as high as the roof of a five-story building. Trapped between a wall of fire and a relentless ocean, they were terrified.
There were four more men on the foredeck, isolated from the others by the conflagration consuming the superstructure, and three men in the water.
Captain Dave Shoemaker’s account of the crisis on the Galaxy ranks as one of the great stories of sea survival.

After the Galaxy by Dave Shoemaker
The eBook is available for iPad, Kindle, Nook or other eReader:
www.johnsabella.com/detail.lasso?title=650979
Email: [email protected] 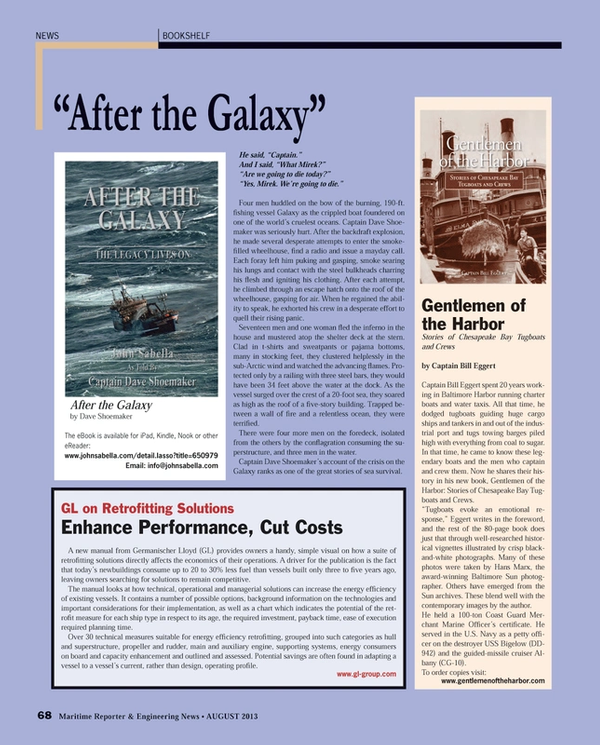 Read Book Review: “After the Galaxy” in Pdf, Flash or Html5 edition of August 2013 Maritime Reporter