Talleres Navales del Golfo (TNG) shipyard at Veracruz, Mexico was originally developed as a new construction facility, but the shipyard has successfully transferred to ship repair facility with an emphasis on steelwork repair contracts.  As a result of recent success in repair operations, the shipyard is currently embarking on a major development and restructuring of the shipyard, with a view to rationalizing the facilities and expanding its repair capabilities.
Despite recent economic turmoil, long term prospects for trade growth, and thereby growth of the fleet and demand for ship repair services, remain good, in the opinion of TNG.
While ships still need to be fixed despite economic conditions, and the fact that so many ships laid-up will need maintenance before returning to full service, ship owners are more than ever focused on cost and survival for a number of years to come. While there is work to be had, maintenance budgets remain tight. Cost control and competitive advantage are likely to be derived increasingly from environmental and efficiency measures. In this regard, TNG has been profitable in the current environment indicating the shipyard has the potential to perform strongly as conditions improve.

Current Market
The level of activity in the Gulf of Mexico’s oil industry is increasing at a steady pace, and several major rigs fabrication packages have been awarded and vessel construction, giving TNG the opportunity to grow and diversify its services towards offshore, fabrication, vessel construction and repairs.  In the last 12 months, TNG has repaired three rigs, giving the yard expanded experience in this market.
Currently TNG is working on nine projects  simultaneously. 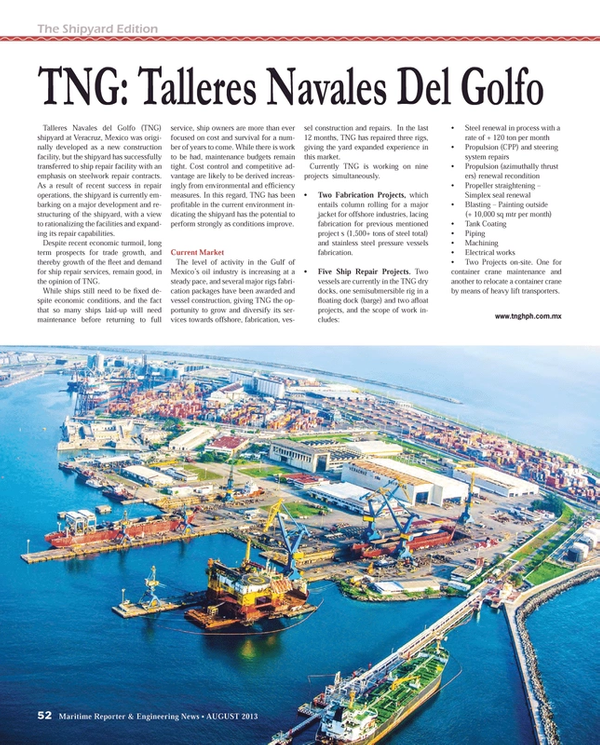