As maritime markets perk up, so too does the satcom sector

While the evolution of communications at sea has had its fair share of starts and stops, largely driven by overriding economic conditions of the day as well as the stale notion that communications costs are an expense versus an investment, Tore Morten Olsen, Head of Maritime Services at Astrium Services, is witnessing a sea change in attitudes, particularly from the stable of global maritime leaders that recognize the inherent value propositions with building a solid communication infrastructure across a company’s stationary and mobile assets.
“I think it is important to realize that the maritime market is not just one market,” said Olsen. “We have seen continuous strong growth in the high-end segments (upstream oil and gas, offshore service vessels, dredgers and cable layers, cruise and ferry, to name a few) over the last few years, both in terms of the number of units and in terms of the bandwidth and services that they apply on board. Today it is about more bandwidth, more services and fewer dollars per bit.”
It is no secret that certain sectors of the general merchant markets have had a rough road to recovery in the wake of the global financial meltdown of 2008. “The first quarter of this year has been very nice in terms of order intake,” said Olsen. “The growth has been slow single digits in that market, but with underlying increase in bandwidth consumption for those that have the services. Now we see a lot of vessels migrating from traditional existing services into broadband.”

Drivers for Connectivity
Traditionally, shipowners are of the mindset that communications are a cost rather than investment, and Olsen readily admits that proving the case of increased efficiency and economic benefit is rarely a straight path. “I think we have tremendous potential, but the real benefit is hard to justify in advance because it requires a different mindset in the way that they operate their vessels,” said Olsen. “And there is no way that I, as a satellite communications person, can tell a shipowner how to operate their vessels. That’s not my job.”
What Olsen can do is rely on his top line clients to lead by example. While he contends that companies increasingly are turning to higher capacity communication solutions, he said minority percentage – approximately 20% – have adopted the solution. “There is still a lot of room for growth.”
While ship automation (ie. “smart ships”) tend to grab the spotlight, Olsen said one of the main drivers for services today are crew requirements. Providing crew amenities was particularly popular in the years up to 2008, when competition for crew was most fierce. However, this competition was dulled in the period 2009 through 2011 when the shipping industry navigated its leanest years and crew retention was not a top line concern. That is starting to change.
“The worst thing you can do to this generation is cut their internet accesss … today’s generation crew has an expectation of access, and the owners have to move.” In addition to crew services, Olsen said that there are several drivers to increased maritime communication service use, including a proliferation of machine-to-machine applications; legislative-driven issues such as secure cargo handling, CCTV for safety and oil spill monitoring; as well as simply leveraging the new onboard IT infrastructure for savings not yet realized, such as reducing phone costs, as Simon Møkster Shipping has done. “He [Simon Møkster Shipping] doesn’t look at his fleet of vessels as a fleet of vessels anymore, he sees each as a branch office,” where he can do everything at sea that he could do at headquarters. To do this, you need a certain bandwidth and throughput to run the applications, Olsen said.

An Industry in Flux
But as the shipping industry turns, so too does the maritime communication business, and Olsen said that years of consolidation and a vast increase in the number of competitive solutions has left the market, at times, confused.
“I think we [the satellite communications sector] are masters of making it difficult for the customer as an industry. Everybody has the best system in the world,” Olsen said.  “The philosophy of Astrium is simple: We are agnostic to connectivity; we want to make sure there is a consistent user experience across the connectivity, making it easy and future proof. Shipowners today are worried if the system they buy today will still be the best system in five years.”
Being a part of the Astrium brand goes a long way in helping to assure existing and potential customers, particularly as the company is able to explore and leverage assets across the corporation, such as its network of earth observation satellites, to create value for maritime customers. “This is a capability that Astrium as a group has, and we are trying to leverage since the acquisition of the competence that sits elsewhere in Astrium to bring more value to maritime.”
At the end of the day, Olsen and his team are focused on bringing to the market tailored maritime solutions, not simply connectivity products. “Now you have more than 100 broadband suppliers in the market; 10 years ago there were four or five of us, and everybody has their own specialty, but focused on the connectivity,” he said. “We need to move from there and focus on what brings value to the vessel independent of the connectivity.”
While he admits price is an important factor in any business, he doesn’t believe price wars are a solid long-term strategy for success. “There is always somebody that will be cheaper, but we are not willing to jeopardize the quality of our product for a lower price. Near term you may take revenue hits, but long term it is a solid strategy.”

When talk turns to investing in the business with Tore Morten Olsen, Head of Maritime Services at Astrium Services, it inevitably comes to the company’s XChange interface, which is positioned by Astrium as a seamless interface regardless of connectivity, for business and crew applications.

•   Benefit from permanent fully secure remote access - with no onboard action required.

•   Backdoor solution: access any communication device, even while offline, through another online satellite terminal.

•   Full access to our XChange local network devices from shore.

In addition, crew can now use their own smartphones or tablets on board thanks to a specially created smart device interface. They benefit from online access, real time cost control, voice and VoIP – and crew members get more privacy. 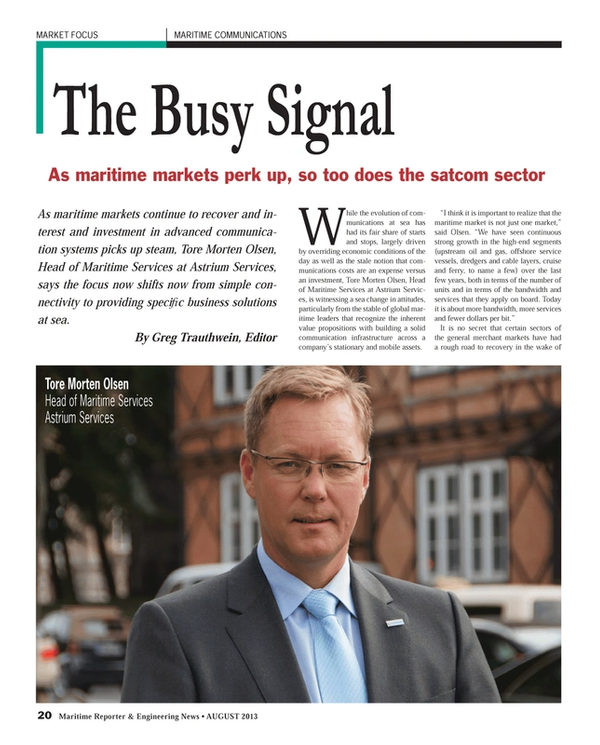