From ShipConstructor to SSI

A significant change that is more than skin deep

On the sidelines at Norshipping 2013 in Oslo, Maritime Reporter caught up with Darren Larkins, a 14-year veteran of Ship Constructor, serving the last two years as CEO. The topic: the evolution of the company from that of an engineering tool supplier to a more consultative role, an evolution culminating in the changing of its name from Ship Constructor to SSI.

Why the rebrand from Ship Constructor to SSI?

Traditionally our core business has focused around ShipConstructor which is an engineering tool focused on the shipbuilding core disciplines. Our business over the last 10 years has transitioned quite a bit into the offshore business and an increased focus on services … the consultative implementation of engineering tools. We’ve really been focused on changing our image to that of total business solutions. So we decided it was time to change the external face of the company to better represent what we are today.

What was the driver for the change?

I don’t think that there’s any one driver in particular. I would say that it is wanting to appear in the marketplace as the company that we truly are today. We don’t just drop product off at the doorstep; the shipbuilding industry is not about that. It needs trusted advisors; we know the business of our clients and we can provide more than a product.

What has been the biggest challenge?

The biggest challenge has been internally, getting our people to not just see it as a white wash, but to see it as the next evolution of the company. When I started with the company we were four or five people, and we’re now about 60 plus with another 60 in our sales channel worldwide. Getting people who have been here long term to recognize the type of company we have evolved to has been a challenge.

In today’s market, where do you see opportunity?

We believe our software is the most scalable in terms of implementation. It is the fastest to implement and easiest to use. We have had great success in the emerging markets; for example Brazil is a real hotbed of activity for us. We have had more than our fair share of success there, and I think this is because our software can be picked up by people who have very little background in shipbuilding, very little experience in 3D CAD tools; and it provides a running start.

How are you penetrating the Brazil market?

Almost all of our sales are done through third-party resellers that have both industry and cultural experience in the markets they serve. For example in Brazil, our partner there has a long history of implementing document management and engineering management solutions in Brazil.  His father, who he runs another business with, has been in the shipbuilding industry as an engineering manager and now runs a business that works with the commissioning of FPSOs and offshore platforms, and he has political connections. So having that engineering and software focus in the son; and the shipbuilding and political connections in the father; as well as the cultural background with both, has ultimately been the key to our success.

Are there any projects going on in Brazil right now?

Absolutly. EAS, the largest shipyard in the southern hemisphere is a ShipConstructor client, and all of the Suezmax tankers have been done with the ShipConstructor software. We have about six or seven recent clients, from yacht builders to larger shipyards.
We have an EAS case study on our website which explains how EAS had to build up its engineering team from no engineers in Brazil capable to engineer a ship; they had to build a production workforce from no one who had built a ship. They [literally took people from the sugar cane fields] in their off-season and taught them to be a production workforce, and built a shipyard and implemented a new production tool in IT. All of this was done in a course of three years.

And what about opportunities beyond Brazil?

India is a market that has its own challenges as well as potential. A lot of the factors that apply in Brazil also apply in India. In Vietnam there is a lot of opportunity, which has been made a bit tougher with political issues. Malaysia is looking ripe for us as well. Also, the workboat segment in general is prime territory, driven by the oil and gas boom.

So it sounds as though you are essentially diversifying the company to other sectors.

One of our key benefits is we think shipbuiliding, we know shipbuilding and we’re not moving away from that one iota … that is core to our business. But we can do other things.

Can you summarize for us: When the change is made, when someone looks at the new SSI, what do you want them to see, to think?

ShipConstructor 2014 Released
With the release of its new ShipConstructor 2014 software, SSI said it has enhanced ShipConstructor’s user experience to promote more efficient workflow. New products have been added to the software suite containing improved capabilities for the design and construction of piping systems along with enhanced capabilities for the reuse of design work. Most noteworthy of all is a new product called MarineDrafting which allows 2D approval and workshop drawings (in DWG format) to be created directly from the 3D model while remaining associatively linked. These new products along with numerous enhancements give users the ability to increase productivity and add new deliverables to their current service offering. P&ID DesignValidation allows for the checking and validation of the ShipConstructor 3D pipe model against 2D schematics generated in standalone P&ID software including AutoCAD P&ID. The validation is performed using neutral formats to allow clients more flexibility in the choice of P&ID software. PipeLink allows the piping systems within a ShipConstructor project to be used within other business processes and applications. This is accomplished through an export to the PCF format from within a ShipConstructor production drawing.
In a world of 3D design and manufacturing, many activities still need to be supported with 2D drawings during design and throughout the shipyard. Using shipyard standards, MarineDrafting allows the creation of 2D approval and workshop drawings directly from the 3D model.
www.ssi-corporate.com 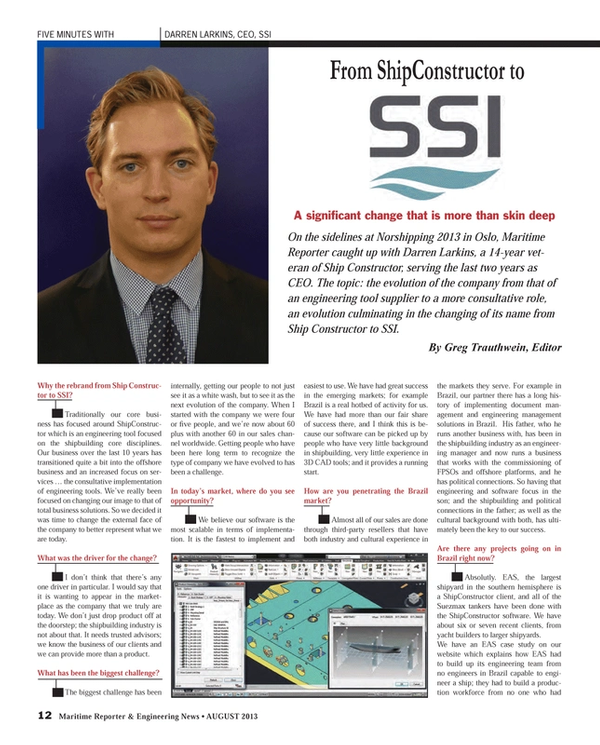 Read From ShipConstructor to SSI in Pdf, Flash or Html5 edition of August 2013 Maritime Reporter