Eastern: Beyond the Backlog

Eastern Shipbuilding eyes bigger prizes while maintaining both quality and an astounding pace of work at their Panhandle locations. For these reasons and more, Eastern is one to watch.

A sweltering, early July visit by Maritime Reporter to Eastern Shipbuilding Group’s (ESG) two Gulf Coast fabrication yards brought much more than the sheer breadth of its business backlog into sharp focus. That’s not to say the robust list of ongoing and future work for Eastern isn’t impressive. It is. For those who have never visited the conveniently located Florida Panhandle shipbuilder, however, it is difficult to put into perspective just how much upside potential resides in the firm’s two Panama City-based yards.
Stretching one mile from end to end, from entrance to the docks, Eastern’s Allanton location alone boasts 140 acres of working space and 6,000 feet of water frontage with another 158 acres available for immediate expansion. A shipbuilder’s series-build dream location, the amount of apron space and staging areas available for multiple projects is also impressive. Operating multiple lines of construction and in continuous business since it opened primarily as a fishing boat manufacturer in 1976, Eastern’s workforce, which includes a staff of 30+ engineering and design professionals as well their own fire department, has swelled to 1,550 employees, up sharply from 1,100 in 1980. With a dock draft of 26 feet and a 32,000 sq. ft fabrication house fully equipped with state-of-the-art processing equipment, Eastern is fully capable of building projects of 670 foot LOA and Panamax beam.

Fully Evolved
Eastern’s original shipyard was established for the purpose of constructing commercial fishing boats. At the time, the company’s founder and President, Brian D’Isernia, owned a fleet of commercial fishing vessels. D’Isernia entered shipbuilding game after determining that the only way he could get the type of vessels he wanted was to design the vessels, write the specifications and then build them himself. Eventually, others took note of the quality there and by 1980, 26 commercial fishing vessels had been constructed and delivered for a variety of customers.
D’Isernia ultimately decided to diversify Eastern to fulfill any type of custom vessel request, large or small. By 1981, Eastern was delivering Offshore Supply Vessels. Today’s ESG portfolio includes the delivery 320 vessels. More importantly, a state-of-the-art product line and fabrication process allows Eastern to build efficiently in series, without sacrificing quality. The growing Eastern portfolio now includes Offshore Supply Vessels, Tugs, Inland Pushboats, Ro-Ro/Passenger Ferries, Inland Transport Vessels, Barges, Fireboats, Research Vessels, Offshore Construction Vessels, High Speed Passenger Vessels, Fishing Vessels and more.

Series Built – for Export, too
According to Steve Berthold, Eastern’s Vice President of Sales & Marketing, Eastern has delivered 83 inland pushboats since 2001, at a rate of roughly seven per year. Among those are 60 of Eastern’s now familiar FMT Canal Class boats, something Steve Berthold characterizes as the longest series build contract in history. ESG, like some other U.S.-based builders, is building for export, too. Proving once and for all that U.S. yards can compete on price and quality, a contract for five DP-2 capable PSV’s for delivery to Brazil will saw its first completed vessel in August; on time and on budget.

Room to Grow
On the horizon for Eastern could be any number of projects, not the least of which would be their entry into the U.S. Coast Guard’s OPC sweepstakes. With the finalists set to be announced as soon as September, Berthold told Maritime Reporter in July that ramping up to meet that commitment, if chosen, wouldn’t be an issue. “That pace won’t compare to the pace we are working at now,” he said, referring to the 10 hulls already under construction within Eastern’s busy yards. Beyond this, he added, “It is the right project for the right firms with the wherewithal to get it done. For Eastern, OPC would remain completely segregated to our other work schemes.” And, with another 158 acres in his hip pocket, there is no reason to doubt him.
Included in their backlog of 25+ vessels, Eastern Shipbuilding Group is currently under contract for a total of 16 vessels of similar size and complexity for customers here in the United States and in Brazil.  These contracts, furthering Eastern’s position as the nation’s and largest and busiest OSV/PSV and MPSV new construction shipyard, also send a powerful message abroad: American shipbuilders can compete successfully worldwide. August’s delivery of the PSV “Bravante V” is ample proof of that. That delivery, a robust backlog with quality customers, and bigger ambitions, make Eastern “one to watch.” 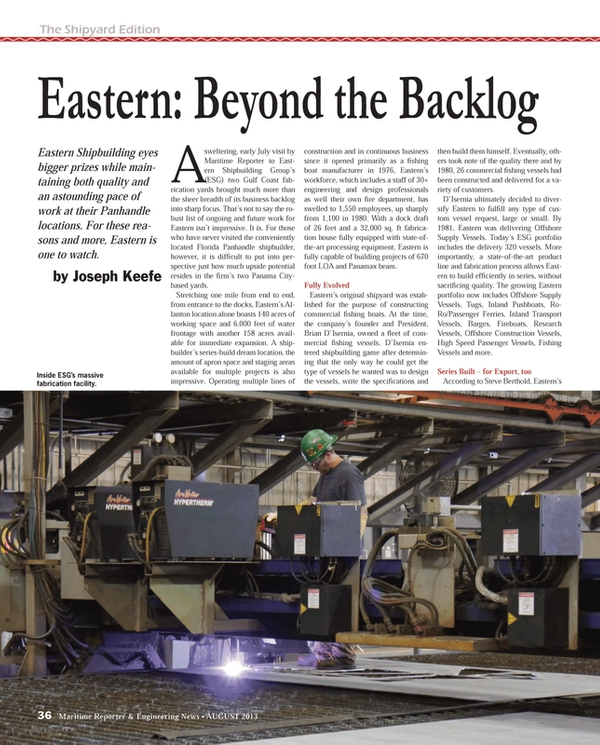 Read Eastern: Beyond the Backlog in Pdf, Flash or Html5 edition of August 2013 Maritime Reporter