With the ocean moving more than 90% of world commerce, keeping it secure is of vital importance – yet our ability to monitor activity at sea is somewhat more challenging than on land given the vastness of the oceans. Also many maritime monitoring systems rely on ships to ‘opt-in’, that can leave potentially risky blind spots in our picture of maritime traffic. This article, derived from a presentation that David Beard of the Defence Science and Technology Laboratory gave at the recent DMC and NovaSAR International Conference, discusses the U.K.’s need for a persistent maritime surveillance system with global reach, and explains how a new low-cost space radar system could help plug the holes in our vision.

The Earth is called the Blue Planet for good reason with the sea covering 71% of its surface. Our interconnected, globalised society is now more dependent on the ocean – and therefore potentially more vulnerable to disruptions arising from it – than at any previous time in history.
The ocean is an economic and environmental resource, a regulator of weather and climate and most of all, the pre-eminent means of transport for both digital communications and physical goods. Approximately 95% of the world’s telecommunications are carried via undersea cables and 90% of the world’s commerce moves by sea. The world merchant fleet is made up of more than 50,000 vessels over 500 gross tons, 103,000 plus vessels over 100 gross tons and many more smaller craft. Add to this number some 21,000 ships in the world’s fishing fleet, and it becomes clear that achieving satisfactory oversight of maritime traffic represents a major challenge.
It is a challenge that a trade-based nation like the U.K. must take up, however, in order to safeguard our strategic interests. Maritime trade supplies 90% of our goods and 50% of our energy needs. U.K. sea trade is projected to be worth circa £700 billion by 2017.
But maritime trade routes are proving increasingly vulnerable: the World Bank estimates piracy off Somalia has imposed a hidden tax on world trade, costing the global economy around $18 billion annually – not to mention some 3,741 crewmembers captured during pirate raids. 50% of the world’s oil travels through seven major sea chokepoints and fear of a closure alone could trigger a significant oil price spike.
In addition, the U.K. needs to monitor around 858,000 square kilometres around the British Isles, as well as the maritime areas around several Crown Dependencies and Overseas Territories in the Antarctic, Caribbean, Mediterranean, South Atlantic, Pacific and the Indian Ocean. Maritime trade needs to be secured within these waters – including provision for search and rescue – while also protecting against illegal activities including drugs, weapons or people smuggling, illegal fishing and pollution.
Add in the requirements of military situational awareness – serving maritime force protection and early warning, as well as enforcing United Nations arms embargoes  – along with support for humanitarian activities such as evacuating U.K. citizens and monitoring refugee movements, it adds up to quite a comprehensive shopping list of needs for maritime security applications:

•    In defined maritime areas of interest
across the world
-     Detect, track, recognize and identify all ships
and boats
-     Detect pollution and attribute to a ship or
boat accurately
-     Detect and map presence of sea ice and
shallow water obstacles.
•    Find, fix, track and monitor activity of
specific ships globally.

In summary, what is required is persistent regional wide-area maritime surveillance, with global reach.
Is such a capability realistically and practically attainable? Perhaps surprisingly, the answer is yes. To begin with, several cooperative ship reporting systems already exist, notably the Automatic Identification System (AIS) mandated by the International Maritime Organization. Introduced primarily for collision avoidance purposes, the maritime equivalent of air traffic control, AIS transponders are carried on a mandatory basis by all large commercial and passenger vessels, continuously broadcasting vessel information including ID, type, position and course, destination and cargo.
Nowadays websites of many ports allow AIS-based tracking of maritime traffic in real time – though VHF-based AIS transmissions are horizon limited so further offshore remains a blind spot. But it turns out that AIS signals propagate into space. AIS-based global ship tracking has been demonstrated by various satellite missions as well as a test receiver on the International Space Station.
Other ship reporting systems complement AIS, including the explicitly satellite-based Long Range Identification and Tracking (LRIT) system and the Vessel Monitoring System (VMS) for fishing vessels. But while there are many ways of recognizing and tracking cooperative vessels, that still leaves non-cooperative vessels out of the picture – and it is these vessels that may warrant further investigation.
So how about harnessing satellites for direct visual ship detection as well? Standard optical Earth observation satellites cannot deliver because most of the world’s sea areas are often covered by cloud. There is a suitable alternative however: satellite-based radar. While optical satellites – like standard cameras – rely passively on reflected sunlight, space-based radar systems actively illuminate the Earth’s surface with a microwave beam then record its resulting backscatter – effortlessly peering through clouds or local darkness. Radar satellites, therefore, chart surface texture rather than reflected light, with man-made structures shining back more brightly than natural surfaces, the straight metal surfaces of ships shining compared to the surrounding ocean (while wave-dampened oil slicks typically appear darker than rougher seas). A standard radar image comes in black and white, although multiple signal polarisations can be combined to add ‘colour’ to a scene – typically possessing added value in detecting both the vessel itself, for example, as well as the wake it leaves through the water to deduce its velocity and direction.
For sharper imaging resolution these ‘synthetic aperture radar’ (SAR) systems mathematically combine the returns from multiple beams as the satellite moves along its orbit, permitting multiple imaging modes combining various different image areas and resolutions. While in medium-resolution SAR mode a ship might appear as a bright dot, a higher resolution mode might cast light on its type, although ship identification cannot be achieved through SAR imagery alone. As well as identifying oil spills, SAR is also sensitive to land features and sea ice, as well as supporting shallow bathymetry.
Radar satellites have been in service for more than four decades. Due to high power requirements, radar satellites tend to be large van-sized platforms with wide solar wings. Usually, they also come with a high price tag, typically in the hundreds of millions of pounds.
But the state of the art has changed, to a point where it is both technically and financially feasible for a radar satellite constellation to become an important source of maritime situational awareness for the UK. The UK’s Guildford-based Surrey Satellite Technology Ltd (SSTL), a leading developer of cost-effective small satellites for more than 30 years, has developed a new radar satellite platform called NovaSAR that will provide affordable and high performance radar imagery.
With manufacture currently underway, the 3m by 1m, 400 kg-mass satellite is a fraction of the size and cost of standard radar satellites, with a solar panel on its Sunward side and a radar antenna pointed Earthward. Its avionics are derived from SSTL’s successful family of Disaster Monitoring Constellation (DMC) Earth-observing satellites, owned by various national government customers but collectively operated for rapid global coverage.
SSTL has achieved this technical breakthrough by leveraging advances in the terrestrial electronics industry to fulfil operational requirements cost-effectively. So, for instance, NovaSAR employs S-band radar as the best compromise enabling a compact antenna combined with affordable amplifier systems. Airborne tests of an S-band SAR instrument have shown an imaging performance comparable to radars operating at higher frequencies, such as X-band.
Its development part-financed by the UK government, NovaSAR incorporates a specific Maritime Surveillance mode, with a typical swath width of 750 km at 30 m spatial resolution (capable of shifting down to 6-m resolution ‘Stripmap’ mode on follow-up passes) covering up to 8.8 million square km of ocean daily, in all weather. Multiple satellites would allow regular passes, occurring every few hours rather than days. The utility of NovaSAR will be boosted further by flying an AIS receiver on the same platform to identify vessels and swiftly pinpoint any anomalous vessels with inaccurate or missing AIS signals.
These coincident space-based radar and AIS intercepts will be combined with other data sources through an already-operational ship tracking system called TELESTO, which serves to construct a maritime situational picture automatically. Developed by Dstl, TELESTO, is providing the national data sharing framework which supports the work of a number of government departments including the National Maritime Information Centre (NMIC) and the Royal Navy.
Opened in April 2011, the NMIC is a cross-government centre staffed by specialists from the Marine Management Organisation, Maritime and Coastguard Agency, Serious Organised Crime Agency, UK Border Force, Metropolitan Police, Ministry of Defence and the, Foreign and Commonwealth Office. These stakeholders give an insight to the varied uses NovaSAR imagery can be put to, regarded as a fundamental ingredient in maintaining and enhancing the UK’s maritime situational awareness. And if a picture is really worth a thousand words, NovaSAR imagery of jewel-like ships strung along our waters may well incidentally raise public consciousness of the pivotal role of sea trade in the UK’s national security and prosperity. 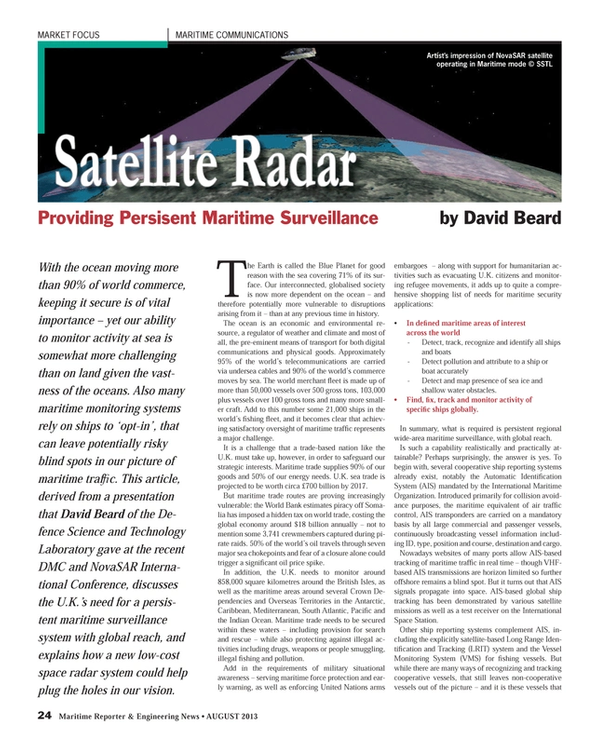