The ability to readily transport personnel and equipment from one ship to another is vital to the success of many U.S. Navy operations, particularly when it comes to seabasing. But tumultuous waters and weather conditions can make the transfer process extremely difficult, placing both the crew and mission in harm’s way.
Under contract of the Office of Naval Research, Alion Science and Technology began work on a solution to make the process safer, inventing the Transfer At Sea (TAS) system, an actively controlled ramp to help neutralize Mother Nature’s effects on ship to ship transfers.
The uniquely-designed system counteracts the forces of waves and weather to function in choppy and turbulent seas with waves as high as 2.5 meters and winds as fast as 21 knots.
Under current procedures, navy crew – often lugging gear and equipment – must trudge across an unstable bridge connecting two vessels that are rising, falling, rocking and twisting at dissimilar rates.
So how does Alion’s TAS system work? Pivoting at its bases to counter the forces of rough seas and weather, the ramp reduces rolling and pitching to make transfers a steadier operation.
“The key to our solution is the active technologies Alion developed, which include an articulating platform and a sliding foot,” said Pete Flemming, VP and Manager of Ship Design Operation at Alion.
“These components automatically compensate for the varying movements of the two ships. This allows the use of a structurally-efficient ramp with mitigated motions, even in Sea State Four conditions.”
Scaled versions of the ramp have been put to the test, first as a 1/12th scale model, then at quarter size. The success of the quarter scale real-world trial (which can be seen on Alion’s YouTube channel, www.youtube.com/user/alionmedia) “proved the viability of the system,” according to Alion, and warranted construction of a full-size demonstrator, scheduled to begin testing in September 2013.
If the ramp achieves its goal, it will make transferring, personnel, cargo, equipment – or anything for that matter – safer, Alion believes, ultimately pushing the Navy one step closer toward efficient seabasing.
And though the TAS system was initially created for the Navy, Mr. Flemming noted the potential for its future outside of the military sector. “There is a definite need for a similar system for commercial vessels,” he said. “[The ramp] could be used to transfer cargo from ships that are too large for a port to smaller vessels or could even be used to move cargo or people from ships that have lost power.”
But maintaining focus on the present goal, Mr. Flemming said, “Those uses are a long way off. The Navy is our priority.” 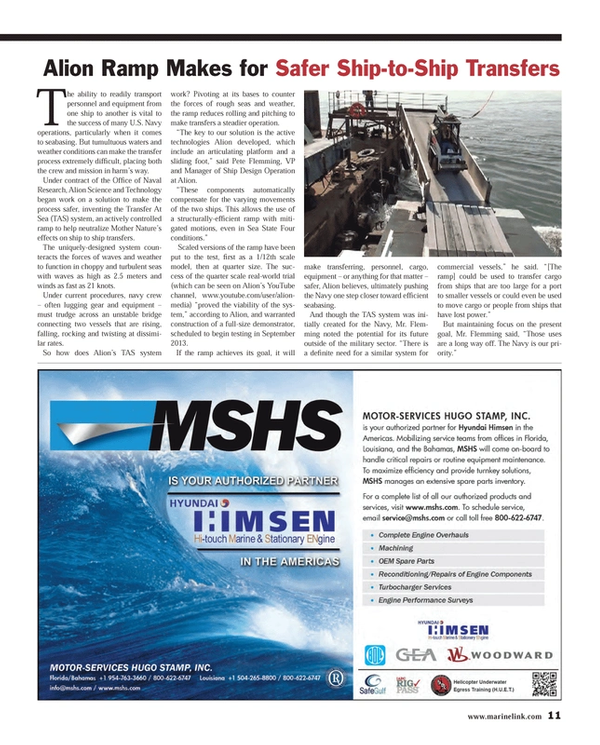