Nortek is a manufacturer of ADCPs and single point velocimeters designed for coastal applications. Nortek Chief Technology Officer, Atle Lohrmann, along with Ramon Cabrera, founded SonTek, Inc. in 1992 and produced in partnership with the United States Army Corps of Engineers Waterways Experiment Station, the first Acoustic Doppler Velocimeter (ADV) for laboratory use. In March 1996, Lohrmann and Cabrera dissolved their partnership and Nortek was incorporated. As acoustic Doppler current profilers began to revolutionize hydrodynamic data collection, the two companies deviated in focus and severed ties. In the early 2000s, Nortek developed a new line of acoustic Doppler current profilers and Velocimeters targeted toward the community of coastal engineers and research scientists. Later on the company developed the first fully functional deep water Doppler current meter in collaboration with WHOI and by 2005 The company had established subsurface level detection as an accurate method to measure wave height.
Acoustic Doppler current meter and current profiler are complex instruments that require a wide range of technology elements in order to perform at an optimum level. The general classification include hardware (analog and digital), digital programming (FPGA and controllers), signal processing (typically DSP implementation), software (PC or WEB), and mechanical design. The Nortek development staff consists of 15 people, all covering one or more classification elements listed. Because of the importance of transducers as part of any underwater acoustic system, Nortek in 2012 acquired the Aberdeen company PCT to further improve the operational parameters of our acoustic Doppler systems.
At this point, the expansion of the company transducer technology is proving quite successful and results are already evident through the effort to introduce a long range current profiler, referred to as the Signature75. In 2011, The company diversified into radar system through the acquisition of the Dutch company SeaDarQ. This effort, which is being spearheaded by Nortek b.v. outside Amsterdam, is currently focused on early detection of oil spills. 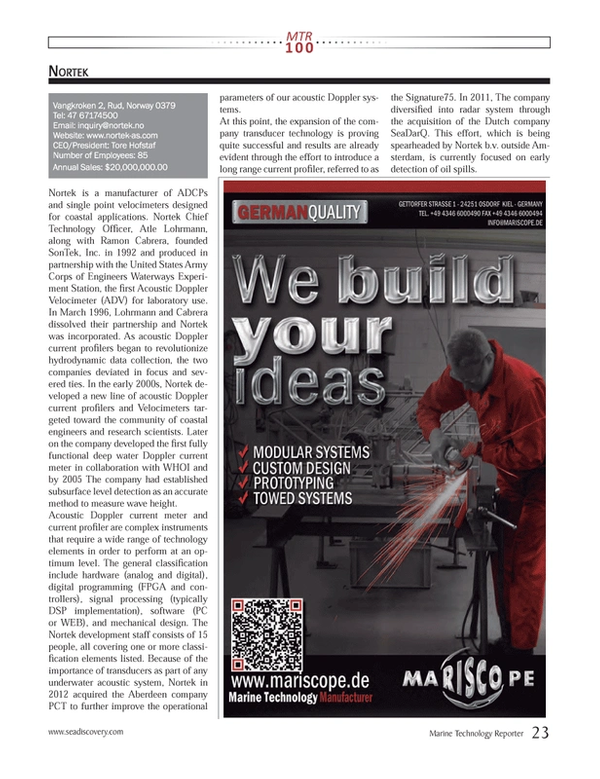