The Wirewalker (WW) profiling vehicle developed by the Ocean Physics Group at Scripps Institution of Oceanography provides a platform for observing oceanographic phenomena that vary rapidly in depth and time. The smooth, “free rising” mode of operation of the WW makes it a suitable platform for the measurement of small-scale turbulence.  A collaborative attempt between SIO and Rockland Scientific Inc. (RSI) to gather estimates of microstructure and the dissipation of turbulent kinetic energy was carried out in the summer of 2012 using a WW and an RSI MicroRider turbulence payload package. The WW platform provided a unique opportunity for RSI to test the performance of the MR over fast and repetitious autonomous profiles in a single location, observing the time evolution of turbulence features in the water column.
The Wirewalker system consists of positively buoyant vehicle that is driven along a wire by surface waves. The wire is used to suspend a 10kg subsurface weight from a surface float (typically 0.5m diameter). The float-wire-subsurface weight assembly moves vertically with surface waves, while a cam mechanism inside the vehicle rectifies that two-way motion into one direction motion (downwards). Once the bottom stop is encountered, the cam mechanism is mechanically disengaged, and the positively buoyant vehicle rises to the surface, completely decoupled from the wire. In this way, high quality oceanographic data can be collected on each upcast.
As the WW is a completely mechanical design, it has proven to be a robust, reliable profiler. Compared to buoyancy-controlled floats and gliders, which have limited payload capacity, the WW only requires rough ballasting and can rapidly accommodate large and complex payloads. Equally capable in drifting and moored modes, WWs have been deployed extensively in the Eastern Pacific, Equatorial, Indian and South Atlantic Oceans, carrying CTDs, oxygen sensors, fluorometers and current meters. For example, an array of three WW units array was deployed for 60 days in 50 m depth off the South African coast where the array collected over 100,000 profiles. This is equivalent to over 6,000 km travelled of profile data. Given a low to moderate sea state, a WW will complete a round trip to 50 m in approximately six minutes, with vertical resolution less than 5 cm, given appropriately fast sampling sensors.

The MicroRider Instrument
The MicroRider (MR) instrument is a modular, self-contained turbulence profiler designed to integrate with a variety of instrument platforms. It has been successfully deployment on AUVs, ocean gliders and profiling floats. The MR carries two velocity shear probes, two fast-response thermistors, a pressure sensor, tilt sensor and acceleration sensors.  The data from the sensors are internally recorded within the instrument that are then downloaded through a serial connection.

WireWalker/MicroRider Integration
The MicroRider and Nortek 2 MHz Aquadopp current meter were mounted on one of the WW rails, with the microstructure sensors roughly 20cm above the WW’s leading edge. A Seabird 49 FastCat CTD, Turner Designs Cyclops 7 chlorophyll-a fluorometer, and a data logger were mounted on the opposite rail. A fin was also rail-mounted in order to align the microstructure sensors into the ambient flow. The combination of rail-mounted vane and rail mount location ensured the microstructure sensors were sampling water undisturbed by the WW wake.
The MR draws ~1W of power during operation, which was supplied by the data acquisition system on the WW. MR data were recorded internally; the WW data logger recorded from all other sensors.

Experimental Methodology
The MR-WW integrated system was tested over two deployments in 30 m of water in La Jolla Cove, CA.  Each deployment was 3.5 days in duration.  Round trip of each profile from the surface to 25 m depth was approximately 3.5 minutes, which provided over 1,500 upcast profiles over each deployment (total: 3,102 profiles over seven days).
Each upcast resulted in  less than 5 cm vertical resolution throughout the water column of horizontal and vertical currents, density, chlorophyll distribution, and less than 1 cm vertical resolution in microstructure temperature and turbulence.

Results
The MR-WW system proved effective at measuring temperature microstructure and estimating the dissipation of turbulent kinetic energy. The study area is subject to strong internal wave forcing. With the MR-WW pair, we were able to observe regions of enhanced mixing in the bottom boundary layer, at the base of the thermocline where current shear was at a maximum and in regions undergoing internal wave induced strain (Fig. 3). These data demonstrate the utility of the MR-WW pair to observe the evolution of mixing and turbulent features in a temporally and spatial resolved sense.
As we move forward with MR-WW collaboration, we will use the platform to study the dynamics of mixing in systems where dissipative processes are unsteady in space and time, and the detailed distribution of mixing, the dissipation of turbulent kinetic energy and fluxes of momentum and buoyancy are required.

(As published in the September 2013 edition of Marine Technologies Reporter - www.seadiscovery.com) 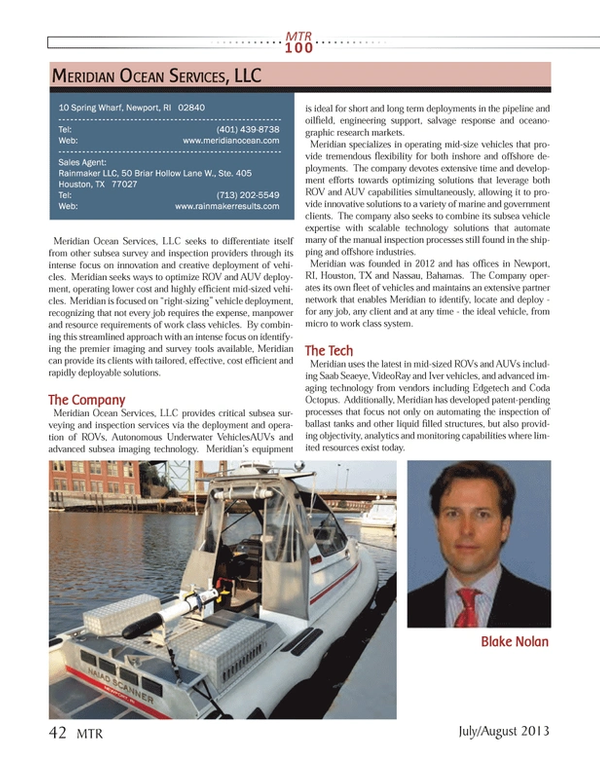