The Assistant Secretary has approved in principle an amended application by F&S Offshore, Inc., 3501 N. Causeway, Suite 600, Metairie, La., for a Title XI guarantee to aid in financing the construction of two oceangoing deck cargo barges. Previously, F&S sought and received Title XI approval for just one of these barges.

The two barges are being built at Bludworth Shipyard, Inc., Houston, Texas. The estimated actual cost of the vessels is approximately $2.8 million (combined).

The vessels will be used in the offshore petroleum industry, primarily in the Gulf of Mexico.

With a deck capacity of 1,500 pounds per square foot, they will be capable of transporting pipe, Co.

modular units, p l a t f o r m s and other construction, drilling and pipelaying materials. Each barge will measure 250 feet in overall length, and have a beam of 72 feet and a depth of 16 feet.

On April 26, 1977, F&S received conditional Title XI approval for the construction of one barge. However, F&S requested an amendment on September 3 to add one identical barge. At that time, F&S also asked for approval to make CRC, a Louisiana corporation, owner of both of the vessels.

CRC, a wholly owned subsidiary of CRC Corporation, 200 Park Avenue, New York, N.Y., will bareboat charter the barges to F&S for an initial term of seven years. Elpac, Inc., parent company of F&S, will operate the vessels under a service agreement with F&S.

In this most recent action, the Assistant Secretary has conditionally approved the addition of a second barge, the ownership of both barges by CRC, and the termination of the original Title XI agreement for one barge. 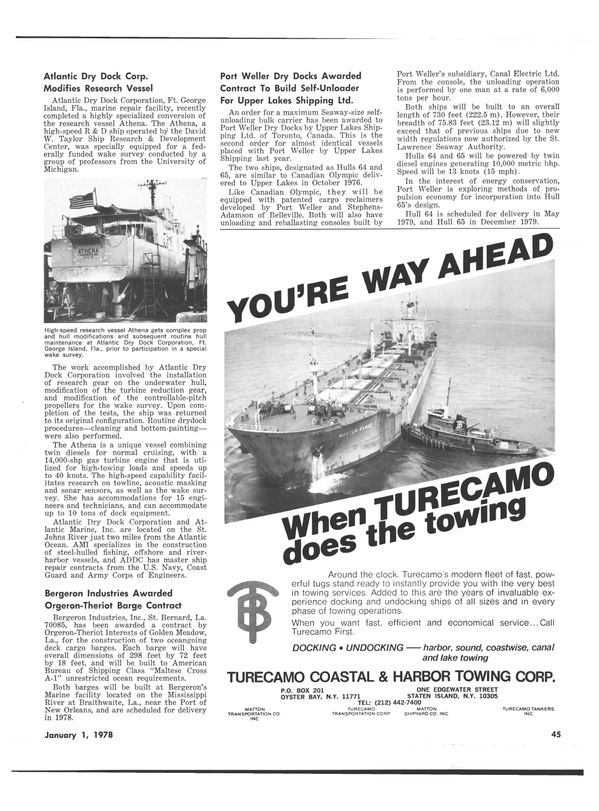