The Flagship Section, American Society of Naval Engineers met recently at the USCG Yard at Curtis Bay, Md. Approximately 100 members and guests enjoyed the social hour and dinner which was hosted by Capt. John Lobkovich, USCG, Commanding Officer of the yard.

After dinner, Capt. Thomas Albee, USN, Section chairman, introduced the speaker, Comdr. Joseph Valenti, USCG. Comdr. Valenti is assigned to the Marine Environmental Protection Division, USCG Headquarters, and his subject was "Coast Guard Response to Oil Spills in the North Atlantic." Comdr. Valenti described that pollution response was the responsibility of the Federal Government, and the USCG has the responsibility as the coordinating agency and as the "on-scene coordinator." The national strike force is composed of three strike teams (manned by USCG personnel) located on the East, Gulf and West Coasts.

With the use of visual aids, Comdr. Valenti described various equipment available to the strike teams in the event of a pollution incident to limit and contain the pollutant, and also aid in its removal. All equipment has been designed and developed to be air deliverable by heavy-lift helicopters or fast surface delivery systems.

After the formal presentation, members queried Comdr. Valenti with numerous questions, and were highly appreciative of his excellent presentation. 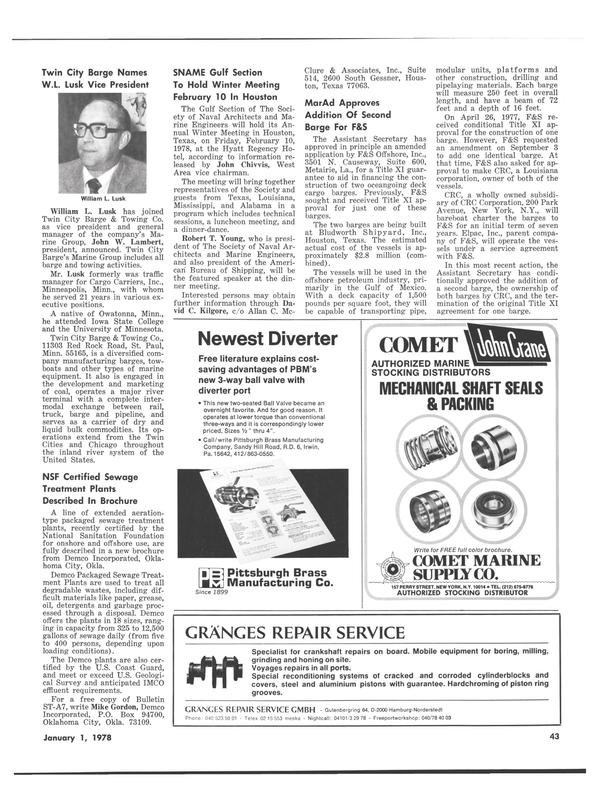