Six maritime industry leaders, including a top official of the International Longshoremen's Association (AFL-CIO), were honored by the National Safety Council for actions in behalf of worker safety. Five of the group were cited for outstanding presentations to the NSC's Marine Section meeting. The sixth—Bruno J. Augenti of the Marine Index Bureau, Inc. of New York—was tendered the Citation for Distinguished Service to Safety, the NSC's highest honor. They are seen here f o l l o w i n g the presentations in Chicago, 111., along with David S.

Walker (back row—left), the former general chairman of the Marine Section; and Rear Adm. Robert H. Scarborough, Commander of the Ninth Coast Guard District, who took part in the ceremonies.

The recipients (from left—front row) are Robert B. Savin of the 3M Company; Mr. Augenti, and John H. Leeper of Simat, Helliesen & Eichner, Inc. The three recipients in the back row (starting second from left) are Jack Thornhill of Southern Towing Company; Myles E. Billups Sr., vice president of the ILA, and John Faulk of Strachan Shipping Company.

As a member of NSC's Marine Section since 1939 and an active participant in ship industry safety program and planning dating back to the 1920s, Mr. Augenti has achieved ranking as one of the most knowledgeable individuals in the field. It was in recognition of these outstanding achievements in marine safety that he was presented with the top award of the National Safety Council.

Included among his efforts were the development of safety programs for United States-flag steamship companies f o l l o w i n g World War II, at the request of the United States Coast Guard and the American Merchant Marine Institute. In addition, through his own company, he has compiled numerous specialized reports and data analyses for use by maritime industry companies in their accident prevention programs.

He also served as maritime representative on the 1962 President's Conference Committee on Occupational Safety, and in 1970 the Department of State appointed him an advisor on the United States delegation to the I n t e r - G o v e r n m e n t a l Maritime Consultative Organization. Also, in 1976, he was invited by the United States Department of Labor to review and comment on a proposed chapter covering the maritime industry in the agency's Field Operation Manual for Prevention of Accidents and Injuries.

Mr. Augenti is presently chairman of the Best Paper Award Committee of the National Safety Council's Marine Section and is also secretary of the Nominations Committee.

The National Safety Council was founded in 1913 to encourage safety in all aspects of national life. It is chartered by Congress as a nongovernmental, nonprofit, volunteer public organization composed of individuals and company members. 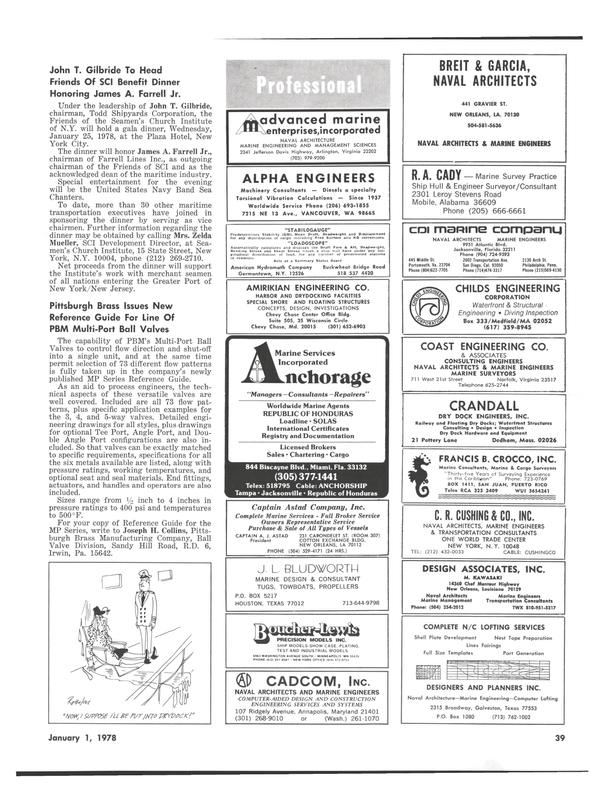