During the naming ceremony for the Hydrolock, W.J. Lees, managing director of Wheelock Marden & Company Ltd., announced that his Group has ordered a n o t h e r f o u r Panamax bulkers from B&W. This brings to 16 the number ordered during the year since the design was introduced — seven of them for the Wheelock Marden Group.

When B&W announced its plans for construction of this new 64,- 000-dwt bulk carrier, the design criteria included an average speed fully loaded of 15 knots, with a fuel consumption of less than 40 tons daily. This represents a 15- 20 percent reduction in fuel oil consumption compared with more conventional bulk carriers.

This improvement in operating economy has b e e n achieved through successful development of the hull design, with bulbous bow and flat-sectioned aft body, and by the installation of a twostroke/ long-stroke diesel engine with an output of 12,600 bhp at 90 rpm.

Built to Det norske Veritas class, the Hydrolock has an overall length of about 738.2 feet, beam of 105.8 feet, depth of 59 feet, and maximum draft of 43 feet. Total hold capacity (grain) is 79,100 cubic meters. Her seven almost identical hatches have inclined coamings and are fitted with MacGregor hydraulically operated steel covers. The four oddnumbered holds can be utilized for transportation of ore.

Main propulsion is provided by a Mitsui/B&W 5-cylinder, longstroke diesel engine, type L80- GFCA, with a maximum continuous output of 12,600 bhp at 90 rpm. Auxiliary machinery consists of three B&W Holeby diesels, type 5T23LH, each driving a 500-kw generator. A soundinsulated room with control instruments for the machinery is arranged on the port side of the engine room. Remote control of the main engine from the bridge allows unmanned engine room operation.

Steering gear is of the rotary vane type. The B&W type spade rudder has an area of 44 square meters and weighs about 90 tons.

In accordance with DnV requirements, it can be turned from 35 degrees on one side to 30 degrees on the other in 28 seconds.

Accommodations f o r o f f i c e rs and crew are arranged aft in a five-deck superstructure. The lowest deck contains galley provisions and cold storage rooms, hospital, and hobby room with exercise and film equipment. Quarters f o r deck crew, cook, and galley personnel, and a laundry are arranged on the boat deck. On the saloon deck, living rooms for officers and crew, mess rooms, steward's cabin, pantry, and duty mess are arranged. Accommodations for the deck and engine officers are located on the officer deck.

The captain and chief engineer each have a separate suite comprising office, dayroom/bedroom, and bathroom. A special room for the pilot is also arranged on this deck. 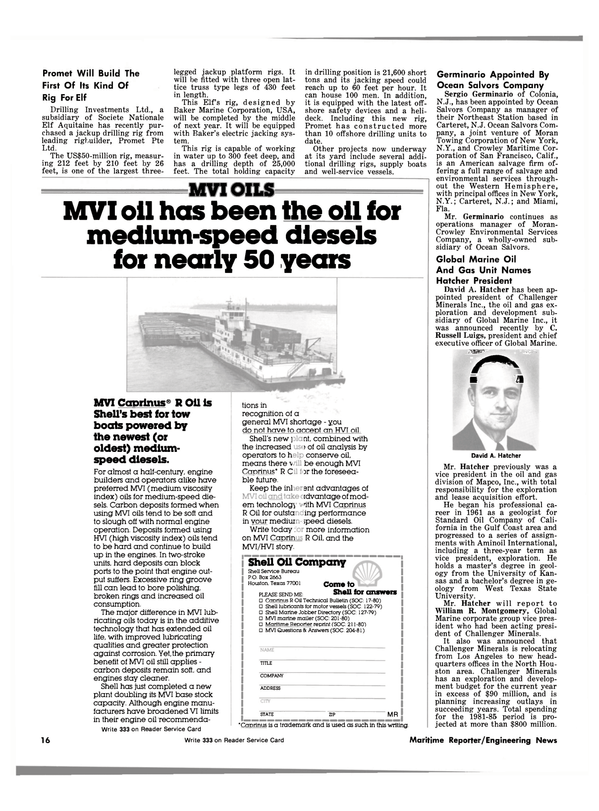