The 23,500-dwt combination container-roll-on/roll-off ship John B. Waterman (shown above) was christened recently at the Sun Ship yard in Chester, Pa.

Sponsor of the vessel was Mrs.

George B. Moran, wife of a director of Waterman Industries, during a brief ceremony.

The 692-foot Waterman is being constructed for Waterman Steamship Corporation of New York. She has a beam of 105 feet 6 inches and draft of 33 feet. A 32,000-shp General Electric steam turbine will propel the ship at a cruising speed of 20.9 knots.

With a capacity of 762 fortyfoot containers, the ship will also be capable of carrying trailers and other wheeled vehicles, and unitized or palletized cargo. The forward section is for containerized cargo, but the main deck and hatch covers are capable of RO/ RO operations. Aft the ship is 100 percent RO/RO.

For ease in loading and unloading, the ship will have a full slewing ramp at the stern, a self-sus- taining container crane, side cargo ports, and a cargo elevator in the RO/RO holds. The stern ramp, said to be the largest of its type in the world, was supplied by MacGregor-Comarain, who also furnished the cargo ports, cargo elevator system, and hatch covers.

Upon completion later this year, the John B. Waterman is scheduled to operate on the North Europe trade route from U.S. Gulf and East Coast ports. A sister ship, the Thomas Heyward, is scheduled to be completed by Sun Ship in 1982. The third ship in the series, the Charles Carroll, has been subcontracted by Sun to the Quincy division of General Dynamics and is scheduled for delivery in 1983. 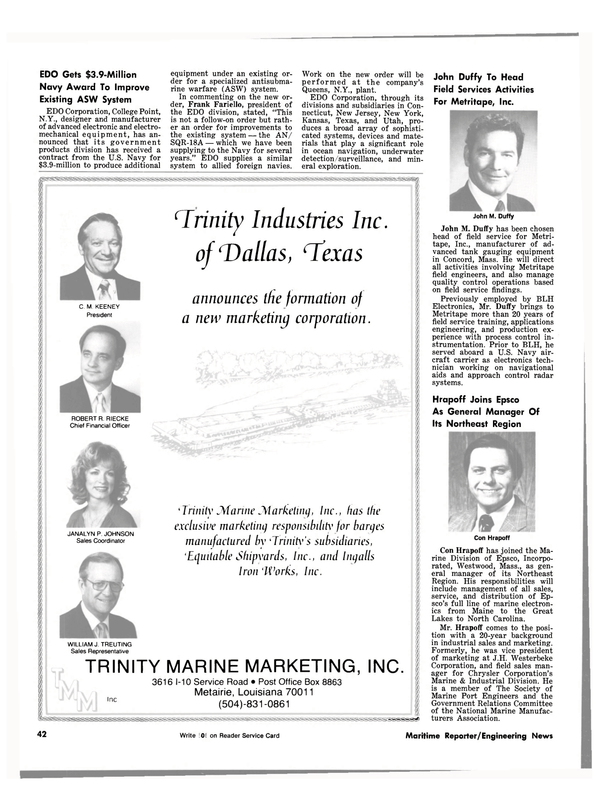