White announced recently. The corporation is making this significant new commitment to Boston's industry by taking a 10-year lease, with a three-year option to extend, on a 21-acre site that includes administrative and industrial buildings and the park's 675-foot drydock.

"The General Ship lease represents an expansion of industry in Boston Harbor and an investment that will be turned into good paying jobs for skilled labor," Mayor White said. The Boston Marine Industrial Park is one of three industrial parks in the city owned and operated by the Economic Development and Industrial Corporation of Boston (EDIC/Boston), the city's lead agency for industrial development.

Under this incentive, General Ship's rent will decrease by one percentage point, to a maximum of a 15 percent reduction, for each percentage of local employment above 50 percent. This is in addition to an agreement to eventually employ Boston residents in 50 percent of the jobs at the facilities.

General Ship will initially spend $150,000 to install many improvements to maintain it as a first class ship repair facility. Mr.

Dacey noted that this investment is a further indication of General Ship's commitment to the Port of Boston, and its appre- ciation of the unique Boston Marine Industrial Park facilities, which include berthing facilities for ship crews.

The General Ship Corporation has been building and repairing ships since 1932.

Over the past four years, the firm's major activity has been the overhaul and repair of complex U.S. Navy vessels. During this period, the company has employed an average of more than 200 persons, and has had annual sales averaging in excess of $11 million.

Ownership of the company has recently passed from the decendants of the founder to a group of private investors headed by Arnold L. Mende, president of the Genesis Group of Waltham. Mr. Mende is chairman of the board. Operating principals include James Harvie, president and chief executive officer, and Keith A. Brown, executive vice president and treasurer. Both were formerly with Bath Iron Works Corporation. 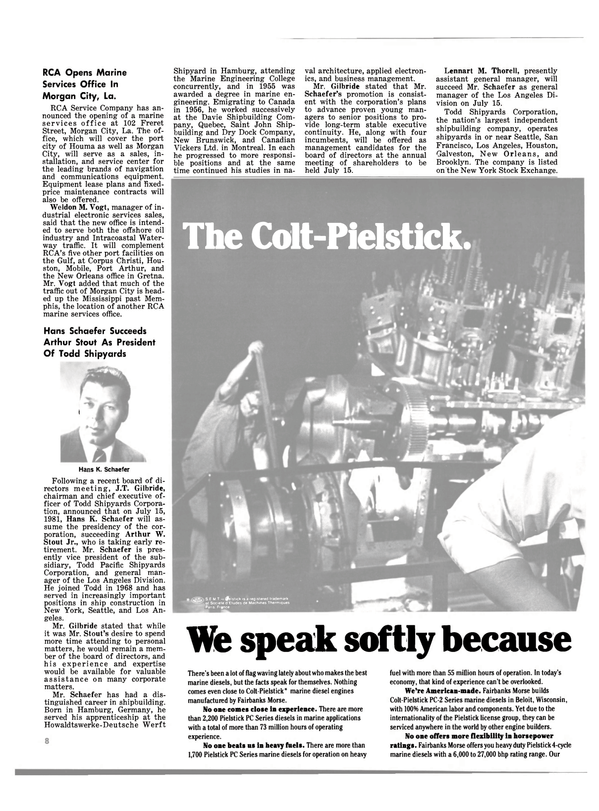