The cruise yacht Ponce de Leon, the first ocean-class passenger vessel built in the United States in more than 30 years, is now under construction in the Marine Fabricators Inc. shipyard, approximately 30 miles south of Jacksonville, Fla., on the Saint John's River. The vessel is being built for the Florida Gulf Coast Corporation of Fort Meyers Beach, Fla., and is scheduled for completion in 1986.

According to Robert G. O'Connor, president of Florida Gulf Coast Corporation, when the Ponce de Leon is completed in 1986 she will provide her 148 passengers with the amenities of a luxury liner and the ambience of a private yacht. The vessel's 4,200-mile range will allow the capability of crossing oceans, while her shallow draft will enable her to visit islands and ports that are inaccessible to larger cruise ships.

According to Florida Gulf Coast Corporation, the Ponce de Leon will offer varied itineraries and will include cruise adventures in the Caribbean, the Mediterranean, Panama, Alaska, Hawaii, and the eastern United States and Canada. 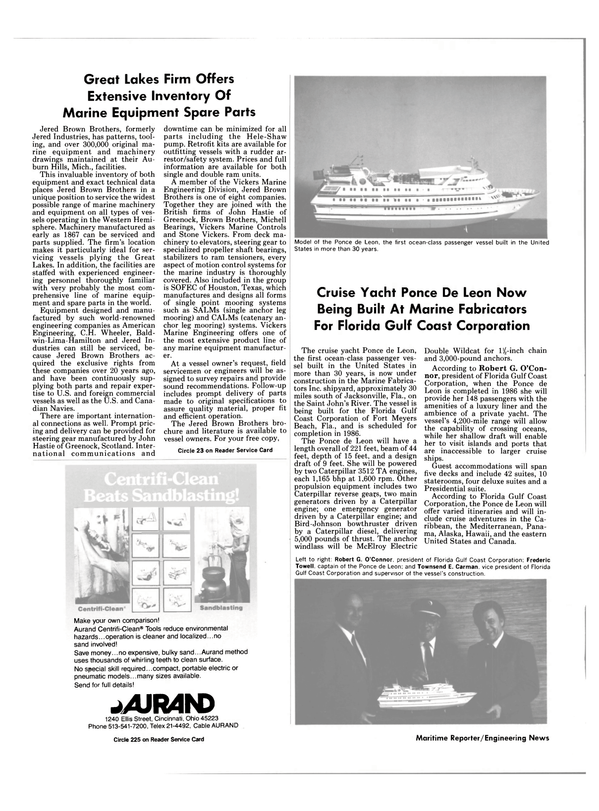