Tidewater Inc. has adopted a capital expenditure budget of $40 million for fiscal year 1986 which commenced on April 1, 1985.

The budget, which will be funded largely through internal cash generation, is as follows: marine services, $25 million; compression services, $12 million; and oil and gas, $3 million.

Capital expenditures for marine services include $2.8 million for the acquisition of two 92-foot line handling tugs for the Nigerian AGIP Oil Co. Ltd., a venture of the Nigerian National Petroleum Co. and AGIP, the national oil company of Italy.

The tugs will serve off the coast of Nigeria, West Africa; $7.2 million is for the modification of towingsupply vessels in the present Tidewater Marine fleet to support the offshore oil and gas industry's new deepwater Gulf of Mexico discoveries which have prompted the need for more powerful equipment to serve floating drilling rigs in this area. Modifications include the addition of more powerful winches, remote-controlled, hydraulicallyoperated anchor handling tongs, and automatic control systems which integrate the thruster, navigation and propulsion system into a single source. Another $15 million has been dedicated to the acquisition of used additions to the fleet as opportunities for such equipment arise in the marketplace.

Approximately $3 million will be applied to a modest domestic oil and gas exploration program.

Tidewater owns and operates one of the world's largest fleet of vessels supporting the offshore oil and gas industry and is active in oil and gas exploration and production and in the air and natural gas compression business. The company also has modest interests in real estate and insurance. 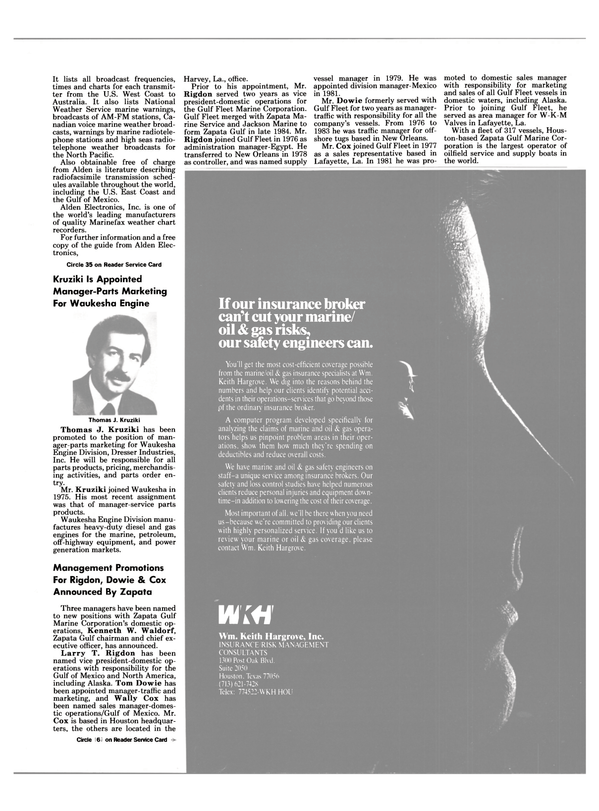