I appreciate this opportunity to appear before you on behalf of AWO to testify on H.R. 1936, legislation to impose annual Coast Guard user fees of $476 million. The Coast Guard continues to feel the effects of budget constraints and the addition of new statutory responsibilities.

However, it appears that the driving force behind this hearing is the desire to reduce federal expenditures, rather than on the merits of this issue. As every member is well aware, this committee has on several occasions rejected imposition of Coast Guard user fees. We hope that, despite the pressure to act quickly to raise revenues, you will take a comprehensive look at the consequences of Coast Guard user fees and the alternative course of cutting costs.

As members of the maritime community, we are appreciative of the committee's continued efforts to help and support American-flag operators. This is particularly important given the desperate economic plight that exists in all segments of the industry. We submit that the best way to help this industry is not to burden it with more taxes. Whatever the term—user fee, charge or toll—these costs are in reality added taxes on our industry.

I hope the subcommittee will keep in mind that the Administration is seeking to greatly increase user taxes for inland waterway operators as well as impose significant new taxes for the use of our nation's ports and harbors. Recently, the Senate leadership and David Stockman shook hands over such an agreement. The cumulative impact is staggering. I will address the specific issue of Coast Guard user fees but it is, I believe, imperative to note that all these proposed new revenue sources are aimed at U.S.- flag operators and should be viewed as a whole.

In 1981 and 1982, AWO testified before this subcommittee on the issue of Coast Guard user fees. After reviewing their comments, I have several observations: AWO's recommendations are as valid today as they were in 1981-82; there is a general reluctance to implement these recommendations as a way to reduce costs; the entire U.S.-flag merchant marine, including shallowdraft coastal and inland operators, has continued to shrink in number, and the economic plight of our industry has steadily worsened over the past four years, with no relief in sight.

The Coast Guard is a military and humanitarian service, operating for the common good, whose charter also includes enforcement of marine safety and protection statutes and regulations.

It is clear that so-called "indirect services"—i.e., vessel traffic services and aids to navigation—do not solely benefit commercial vessels. These functions also provide significant benefit to our nation's ports, recreation areas, fish and wildlife enhancement, water quality—to the American public as a whole. The "public benefit" ripple effect of Coast Guard responsibilities is not confined exclusively to indirect services.

For example, icebreaking—a "direct service" according to the Administration—provides benefit to a wider universe . . . just ask the residents of areas that my company supplies with home heating oil in the winter.

As to direct charges, which are contemplated in the House and Senate budget resolutions, commercial vessel operators are being asked to reimburse the Coast Guard for functions performed as a result of statutorily-mandated requirements.

The responsibility for enforcement of these statutes has been given by Congress to the Coast Guard. In response to that Congressional mandate, the agency performs a governmental function and has promulgated rules and regulations with which we must comply.

Compliance with these requirements is already costly to our industry; it is inequitable to ask commercial vessel operators, deep in the midst of an economic depression, to bear the added financial burden of reimbursing the Coast Guard for performing its statutorily-mandated duties. These requirements were promulgated for the public good and are clearly not benefits conferred upon the industry; we oppose paying for these so-called services in the form of Coast Guard user taxes.

Furthermore, because of the Coast Guard's multi-mission function, there are numerous costs inherent in each Coast Guard "civilian" activity that would not be present if private industry was performing that activity, unencumbered by the military aspect of Coast Guard operations.

And, because the agency's budget is structured to respond to the Congressional authorization and appropriations process, it cannot accurately identify the direct costs associated with performing a specific function with respect to each segment of the maritime industry.

The industry is in the fourth year of a severe depression that shows no sign of diminishing. All executives of barge companies can readily identify with the need to respond to budget deficits. There are two avenues which can be taken: raise revenues or reduce costs. The Coast Guard is in the same "market" that we are. Our industry cannot raise revenues because the market will not accept higher rates. That simply means we are not in a position to pass on increased costs to our customers.

The prudent operator has but one option: reduce his costs to try to preserve his operating margin.

Some of us have had success. We have reduced staff sharply and work smarter. We prioritize our time to work on only those things that are important. We reduce our expenditures wherever we can, without affecting the safety of our operations or the quality of our service.

We recommend that the Congress exercise the same prudent business approach that private industry has been forced to adopt by asking the Coast Guard to reduce their operating costs, and transfer additional functions to the private sector to allow a reduction in personnel. The Coast Guard already has delegated the responsibility for performing certain functions to the American Bureau of Shipping (ABS), a private classification society. ABS performs these duties efficiently and costeffectively because they are able to maintain lower overhead costs. Further, it runs as a business, indepen- dent from the federal political process and budgetary morass. Such action would reduce the government's cost burden without the need to impose additional taxes on the industry for the inflated costs of Coast Guard functions.

Before proceeding to enact user taxes, Congress must first accurate- ly identify the range of beneficiaries to enable a distinction between government activities undertaken as a general public service and activities with more selective benefits.

In attempting to identify the beneficiaries of Coast Guard services, it is readily apparent that the vast majority of its functions have a broad range of beneficiaries. This is true of its regulatory functions as well, functions which are performed for the public good in response to statutory requirements.

Because of the complexity of the Coast Guard's budget and the difficulty of allocating costs to specific user groups, AWO believes it will prove impossible to equitably and accurately determine the true cost of performing that function for each user group. Nor, for reasons stated earlier, could that cost be competitive with the private sector. Congress should direct the Coast Guard to identify those areas where greater civilianization, including contracting out, is feasible.

We cannot reconcile logically or philosophically the Government charging a private industry for work performed by a branch of our armed forces. Our individual and corporte tax dollars are already being collected and appropriated for military expenditures. However, should the Coast Guard be permitted to charge for these functions, then the industry upon which the taxes would be imposed must be allowed to assess the value of each function. They must also be allowed to have a say in the degree of service and how it may best be performed in the most costeffective manner.

Without exaggeration, H.R. 1936 would have a severe economic impact on the barge and towing industry.

At a minimum, the inland segment of our industry would pay $57 million in indirect fees, with an indeterminate additional amount for direct fees. This is on top of the inland waterway user tax already being paid and which will automatically escalate by 25 percent on October 1, 1985. The coastal barge and tug industry would pay dearly under H.R. 1936, although from the information provided by the Coast Guard we cannot accurately estimate the total cost. One coastal member, however, has determined his company would pay an added $1,000,000 "annually under H.R.

As I said earlier, the industry is in a deep economic depression. Arthur Andersen & Co. surveyed 15 of the largest inland barge companies from 1980 to the present. In 1980, these companies earned $120 million before tax on just over $1 billion of revenue. In 1982, the situation reversed dramatically: the 15 companies lost $30 million, and paid $11 million in user taxes. In 1983, they lost over $40 million. Preliminary analysis suggests that 1984 was even worse. Keep in mind that these are the large companies. The mid-sized and smaller companies, lacking financial staying power, have gone bankrupt in cascading numbers.

During 1984, approximately 90 barge and towing companies went bankrupt, with a similar number expected to shut down operations this year. In other words, one in five waterway companies or about 20 percent of the industry will have gone out of business in just two years!

Enactment of H.R. 1936 would, we believe, significantly reduce the Coast Guard's effectiveness in both its military and civilian roles. Additionally, the relationship between the maritime community and the Coast Guard would deteriorate, becoming increasingly adversarial.

Would our industry have to pay a tax for the Coast Guard's involvement in the Towing Safety Advisory Committee?

While the $200+ billion budget deficit would theoretically be reduced by $476 million annually, the losses to the Treasury in tax dollars contributed by the affected industries and their employees will surely exceed that amount.

The Coast Guard can reduce its costs as our industry has done and continues to do. We would be pleased to work with you and your colleagues and the Coast Guard to assist in this effort. We urge you to look toward cost savings, Mr. Chairman, and resist the pressure to hastily enact Coast Guard user taxes. 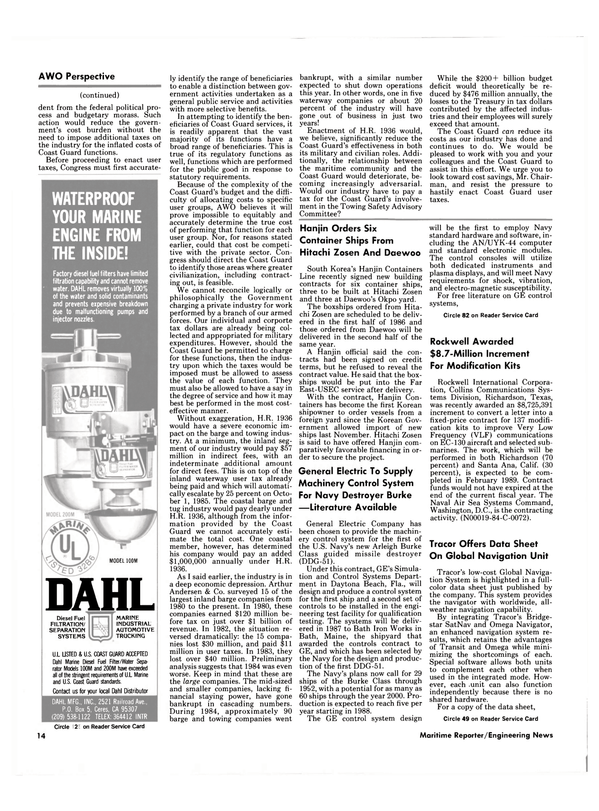