The construction contract was awarded to Gladding-Hearn in December 1984, and delivery is scheduled for this summer. She will replace an aging and slow steel-hulled dispatch boat.

The Sandy Hook Pilots wanted a fast boat to cut the commuting time from base to station from one hour to half that time. The boat had to be comfortable and capable of going in any weather all year round into the North Atlantic to transport some 12 pilots plus crews in safety to the station vessel. Finally, the new boat had to be capable of standing in for one of the big station vessels for up to two days in the event that one of them is out of service for repairs in a shipyard.

Hunt Associates and Gladding- Hearn came up with this 64-foot, 20-knot, deep-V-hulled boat, custom designed to do the job. This design is a larger sister to nearly a dozen other Hunt/Gladding-Hearn pilot boats operating on the East Coast.

The boat has a beam of 17 feet (plus 6-inch rubber fender) and a draft of 5 feet 6 inches. Fuel capacity is 1,500 gallons, and 200 gallons of potable water can be carried. Her normal role is as a dispatch/commuter boat from the shore base in Staten Island, N.Y., to the boarding station 12 miles at sea.

In the event that this boat has to be pressed into service as a relief station vessel, she can take aboard another 1,000 gallons of fresh water as ballast to give her the stability of a much larger vessel while holding station off the Port of New York.

Pilots will board from the main deck forward, within complete view of the raised pilothouse, which is arranged amidships and has 360- degree visibility. A complete navigation bridge imitates the bridge of a much larger vessel.

Of particular interest are the safety systems incorporated into the design at the request of the Sandy Hook Pilots. Pilots worldwide are sharing information on how to make the very dangerous job of boarding ships at sea safer. The New York- New Jersey Pilots decided to adopt several features suggested by their fellow pilots. Recessed into the transom is a platform near the waterline that would allow a conscious man in the water to pull himself aboard or be aided aboard by crewmen. 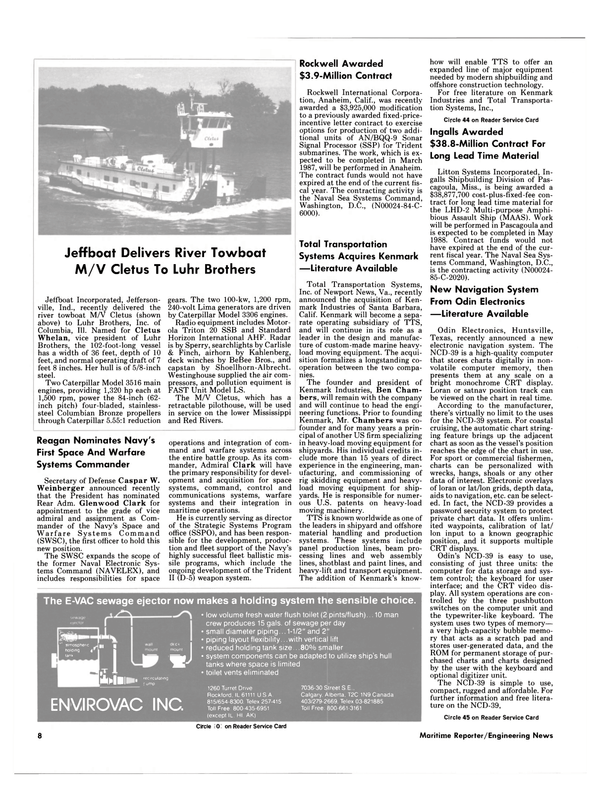