The 2nd Lt. John P. Bobo, the first of five Maritime Prepositioning Ships (MPS) designed and built by General Dynamics' Quincy, Mass., shipyard for charter to the Military Sealift Command, will serve as floating warehouses for vehicles, fuels, ammunition, food, medical supplies, and other temperaturesensitive materials through areas that will range from intense heat and humidity to extremes of Arctic cold. Therefore, their cargo area heating, ventilating, and and air conditioning (HVAC) systems have some very special control requirements.

To meet these requirements, General Dynamics engineers have designed a complex system utilizing a single main vent system (MVS) running the length of the ship. Each of the individual cargo areas is served by the MVS, but each has its own independently operated fans, heaters, humidifiers, and air conditioning units. And to prevent overloading of the ship's generating system, all of these components are interconnected through a single control system.

The system is based upon a programmable controller with six remote I/O units, a specially designed alarm and control panel (ACP), and six Telemecanique Inc. programmable motor control centers (PMCC). "We chose a programmable controller because of the logic requirements," says Warren Freeman, manager of electrical engineering at Quincy, "and because of its ease of use at sea. We also had some very tight space restrictions to consider." The controller is a Modicon 584 from Gould, Inc. It serves to continuously monitor the total system condition, and drives the seven I/O channels—one local for the ACP, the others in the cargo areas. The I/Os are connected to the controller via coaxial cable. There are two coaxial paths between each I/O and the controller—the redundancy being a safety and damage control consideration.

This distributed I/O design also permits maintenance shutdowns on individual subsystems without disturbing the operation of the other components in the system.

The HVAC system components on each of the six remote I/O channels are controlled through the PMCCs. These contain the contactors and starters for each of the components. They also contain manual control pushbuttons for each of the MVS fans. These are used to control the fans when they are not being operated in a group mode from the ACP. All MVS fans are two-speed units, and all speed changes are preprogrammed to go through a "stop" condition. In addition, if CO, is detected in the hold area, indicating the presence of firefighting vapors, all supply and exhaust fans in that area are turned off automatically.

The PMCCs'also start all fans, motors, and heaters sequentially in steps of less than 100 hp or 60 kw.

In its normal mode, the complete system functions automatically.

However, it may also be operated in a manual mode in which all components can be stopped or started individually for maintenance purposes.

At the time of purchase of this system, the ACP and the PMCCs were furnished by the Industrial Control Division of Gould, Inc.

Since that time, however, that division has been sold to Telemecanique Inc., a major supplier of programmable controllers, motor control centers, switches, relays, pilot devices, sensing devices, and power distribution systems.

For additional information on the company and its products, Circle 16 on Reader Service Card 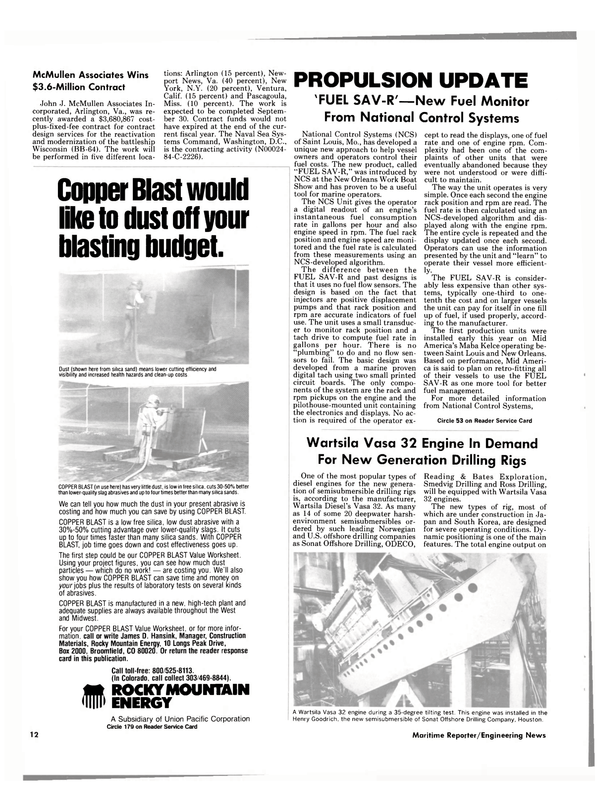