National Control Systems (NCS) of Saint Louis, Mo., has developed a unique new approach to help vessel owners and operators control their fuel costs. The new product, called "FUEL SAV-R," was introduced by NCS at the New Orleans Work Boat Show and has proven to be a useful tool for marine operators.

The NCS Unit gives the operator a digital readout of an engine's instantaneous fuel consumption rate in gallons per hour and also engine speed in rpm. The fuel rack position and engine speed are monitored and the fuel rate is calculated from these measurements using an NCS-developed algorithm.

The difference between the FUEL SAV-R and past designs is that it uses no fuel flow sensors. The design is based on the fact that injectors are positive displacement pumps and that rack position and rpm are accurate indicators of fuel use. The unit uses a small transducer to monitor rack position and a tach drive to compute fuel rate in gallons per hour. There is no "plumbing" to do and no flow sensors to fail. The basic design was developed from a marine proven digital tach using two small printed circuit boards. The only components of the system are the rack and rpm pickups on the engine and the pilothouse-mounted unit containing the electronics and displays. No action is required of the operator except to read the displays, one of fuel rate and one of engine rpm. Complexity had been one of the complaints of other units that were eventually abandoned because they were not understood or were difficult to maintain.

The way the unit operates is very simple. Once each second the engine rack position and rpm are read. The fuel rate is then calculated using an NCS-developed algorithm and displayed along with the engine rpm.

The entire cycle is repeated and the display updated once each second.

Operators can use the information presented by the unit and "learn" to operate their vessel more efficiently.

The FUEL SAV-R is considerably less expensive than other systems, typically one-third to onetenth the cost and on larger vessels the unit can pay for itself in one fill up of fuel, if used properly, according to the manufacturer.

Based on performance, Mid America is said to plan on retro-fitting all of their vessels to use the FUEL SAV-R as one more tool for better fuel management. 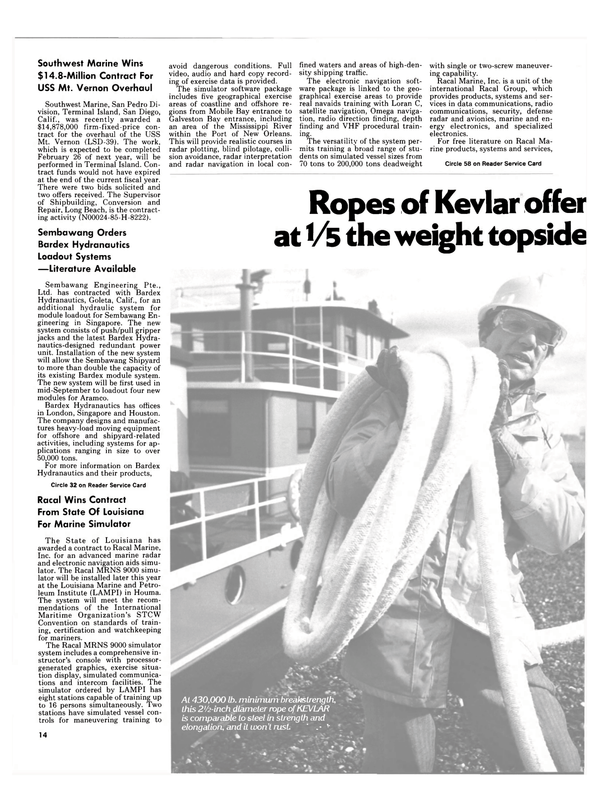