The ships are part of a three-year capital program of approximately $500 million to significantly improve efficiency and expand the company's intermodal transportation system in the steadily growing Asia and North America markets.

The new ships will replace significantly smaller vessels and will run at a substantially lower operating cost per container move than the older ships.

To expedite the delivery schedule, the shipbuilding order will be divided between two shipyards.

The fast, highly fuel-efficient vessels will each be capable of carrying a minimum of 3,800 twenty-foot container equivalents of cargo, including 20-, 40-, 45-, and 48-foot containers. Featuring the latest in propulsion systems and navigational technology, the ships will cross the Pacific at a fast 24 knots. This will enable the company to continue offering highly competitive transit times for time-sensitive shipments, said Bruce Seaton, president of APL and its Oakland-based parent organization, American President Companies.

To maximize economies of scale and efficiency of operations, these will be the first cellular vessels not constrained in their design by the dimensions of the Panama Canal.

The ClO-class ships will have a length of 896 feet and a beam (width) of 129 feet (the maximum for canal transit is 106 feet). The additional width will provide improved stability and performance at sea, facilitate faster loading and unloading of containers in port, and yield additional fuel economies.

Its 18 containerships have not used the Panama Canal since the mid-1970s, and are deployed exclusively in the Pacific and Indian Oceans.

Mr. Seaton said the company has exceeded the average capacity utilization of the industry for some time. "We are running full in the import [eastbound] trade, and nearfull in the export trade," he said.

"By replacing less competitive tonnage with larger, more efficient ships, we expect to be able to meet customer demand and continue to participate in increasing trade volumes in the Pacific Rim." He noted that the ships have been designed to accommodate elongation at a later date.

With the new ships, APL plans to increase sailing frequency and reduce transit times on key routes, and increase the number of Asian ports served. In conjunction with greater trans-Pacific cargo volumes, the company also plans to expand the routes and service frequencies on its North America stack-train system.

The ClOs will be capable of carrying bulk cargoes in addition to their large capacity for dry and refrigerated containers.

The ships will operate under the U.S. flag and with U.S. manning.

Richard L. Tavrow, APL senior vice president and general counsel, said the Maritime Administration has approved operation of the new ships as replacement vessels under the operating differential subsidy (ODS) program, which compensates the company for the relatively higher wage costs it incurs for the use of U.S. crews. Under MarAd requirements, the ships will have national defense features and will be enrolled in the emergency preparedness program.

Ocean Fleets, Ltd. of Liverpool is serving as design and construction consultant to APL on the shipbuilding project.

Beyond these enhancements to APL's international transportation infrastructure, Mr. Seaton said APC will separately invest significantly over the next few years in additional equipment for its domestic transportation operations in North America.

For free literature on the facilities and capabilities of HDW shipyard, Circle 50 on Reader Service Card 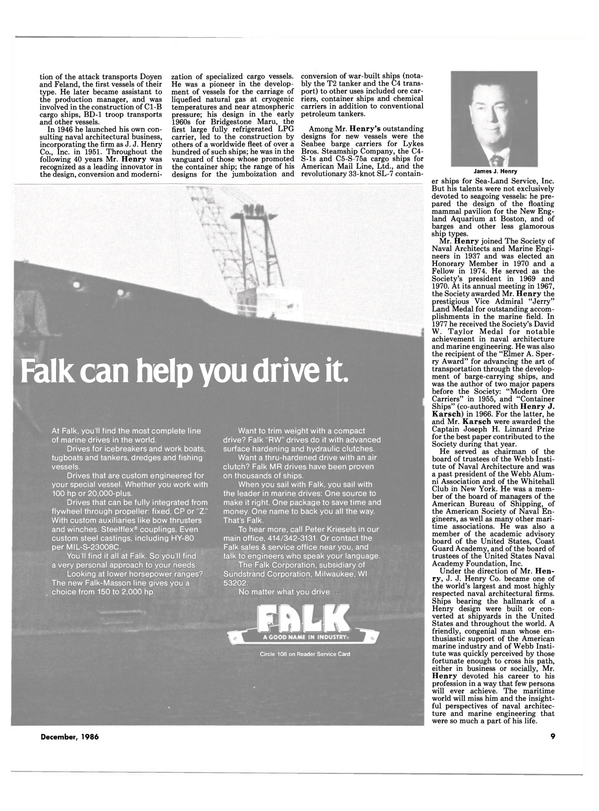