Over Half Of Navy's Procurement Dollars Awarded Competitively

For the first time in history, over one half of the Navy's procurement dollars were awarded on a competitive basis during fiscal year 86. This competition has resulted in significant savings in shipbuilding and in the aircraft, missile, combat systems, spare parts and maintenance programs. In the shipbuilding program alone, this has resulted in savings of $6.1 billion over the past four years.

In a communique to the Navy's competition advocates, Rear Adm.

Stuart Piatt, the Competition Advocate General, announced that a significant milestone was passed when, in addition to introducing competition to the procurement actions, three fourths of all the Navy's contract actions were competitively based. Admiral Piatt wrote that "We faced a difficult task in overcoming the institutional bias for sole source procurement that had permeated our business practices post World War II." Since fiscal year 1982, the Navy has gone from awarding seven percent of its dollars for aircraft parts competitively to over 41 percent in 86. For shipboard parts, the Navy was awarding 27 percent of its parts dollars competitively in 1982, while in fiscal year 1986, that number leaped past the 41 percent mark. 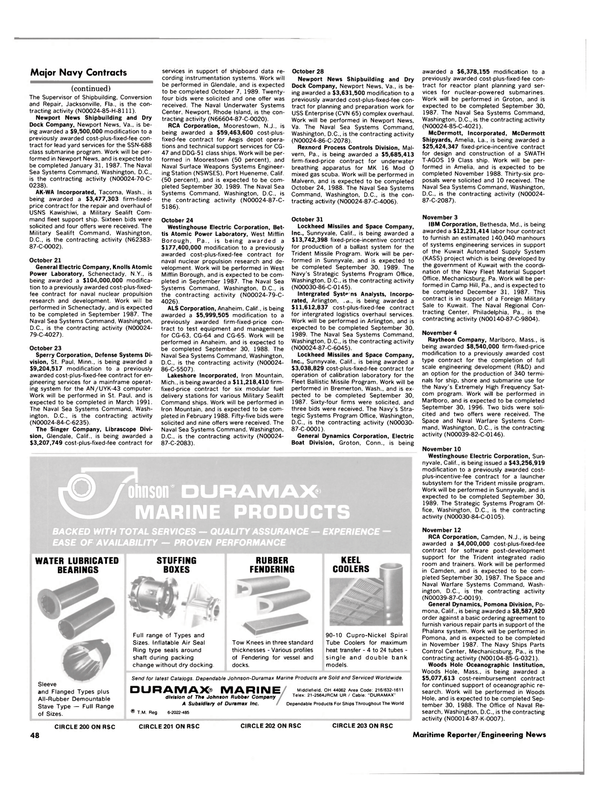 Read Over Half Of Navy's Procurement Dollars Awarded Competitively in Pdf, Flash or Html5 edition of December 1986 Maritime Reporter