When he said, "USS Theodore Roosevelt, come alive," a crowd of some 20,000 cheered and applauded.

As the crew came to attention, 16 aircraft in close, four-diamond formation flew directly up the centerline of the ship. The flight, representing Carrier Air Wing Eight soon to be embarked on the Roosevelt, consisted of four each F-14s, FA-18s and A-6s and two each E-2s and S-3s from Carrier Air Groups Eight and 13.

The principal offensive striking power on the Theodore Roosevelt will be shared by two attack aircraft: the A-6E Intruder all-weather attack aircraft and the F/A-18 Hornet strike fighter.

The primary air defense force for Theodore Roosevelt and her surface escort ships will be provided by the E-2C Hawkeye/F-14A Tomcat team, which maintains a defensive barrier of several hundred miles around the carrier battle group and ensures that no unknown ships or aircraft cross the barrier.

Airborne electronic defense will be provided by a squadron of EA-6B Prowlers.

USS Theodore Roosevelt, named for the 26th President of the United States, is the 15th deployable carrier in service today and the 11th active carrier built by Newport News Shipbuilding. She is the fourth ship in the Nimitz class, displaces 97,000 tons and achieves speeds in excess of 30 knots powered by two nuclear reactors.

As a key element of the nation's forward defense strategy, USS Theodore Roosevelt is tasked with maintaining open sea lanes of trade and communication. With 85 tactical aircraft and more than 6,200 professional Navy men aboard, she is one of the most powerful warships ever built.

Barbara Lehman, Secretary of the Navy John Lehman's wife, sponsored the ship and approved the ship's seal together with Grace McMillan, the Matron of Honor and the first grandchild of President Theodore Roosevelt.

Weinberger was the principal speaker at the commissionary ceremony.

He said, "Theodore Roosevelt was a man of vision and peace, whose policies guided the United States toward the position we now hold—the world's most powerful defender of freedom.

"Nothing we as a nation might do to honor Theodore Roosevelt's legacy more appropriately captures his strength of spirit and the force of liberty than this great ship." Mr. Weinberger continued, "this ship is being delivered to the Navy 16 months ahead of schedule and more than $80 million under program costs." Secretary Lehman and Carlisle A. H. Trost, Chief of Naval Operations, also spoke at the commissioning ceremony.

Admiral Trost said of the commissioning " . . . I have no doubt it will cause concern in the minds of those who might challenge us at sea.

And they might also wonder, despite the weather, why so many people are here this morning on this occasion. Could it be there really is a great appreciation by the citizens of our country of the need for a strong Navy?

"There is proof of that belief and I would say to those who might challenge us, you bet there is an appreciation.

You'd better look out. We are good. We are ready and we intend to stay that way." The delivery to the U.S. Navy of the Theodore Roosevelt by Newport News Shipbuilding is a fitting climax to this leading shipyard's yearlong celebration of its 100th anniversary.

The company's first U.S. Navy contract in 1893 was for the construction of three gunboats, the Nashville, Wilmington, and Helena, and marked the beginning of a long association between Newport News Shipbuilding and the Navy that continues today.

In early 1942, the Navy began the conversion of five light cruisers to light carriers. They were 11,000-ton, 610 foot warships capable of 32 knots and carried 35 planes. The first carrier, Independence, was finished in 1943, and by the end of World War II, 17 Essex-class and nine Independence-class carriers were operational.

During the war, the names of Newport News-built carriers were legendary. Yorktown. Enterprise.

Essex. Intrepid. Randolph. Hornet, from which Jimmy Doolittle launched his B-25 attack against Tokyo. And Franklin, which was the first large U.S. carrier to suffer extensive damage from a kamikaze attack, limped home to the U.S.

under her own power.

The post-war years saw the evolution of the Midway-class carriers which were completed in 1945 to 1947, and were the first U.S. carriers to have armored flight decks. The Midway and Essex-classes were later modified for jet aircraft operation.

In 1955, Newport News Shipbuilding built the country's first supercarrier, the Forrestal, 1,039 feet long and designed specifically for jets. She had a large starboard "island" design with four deck-edge elevators that reduced the interruption of flight and hanger deck activities associated with center-line elevators.

In 1975, Newport News delivered the Nimitz, one of the largest mobile structures ever built. The Nimitz and the others in her class, the Dwight D. Eisenhower and Carl Vinson, are 1,092 feet long, displace 91,000 tons and carry about 100 planes and 6,000 sailors.

For the past 50 years Newport News Shipbuilding has been the country's premier designer and builder of 23 of the ocean's mightiest ships—the aircraft carrier. 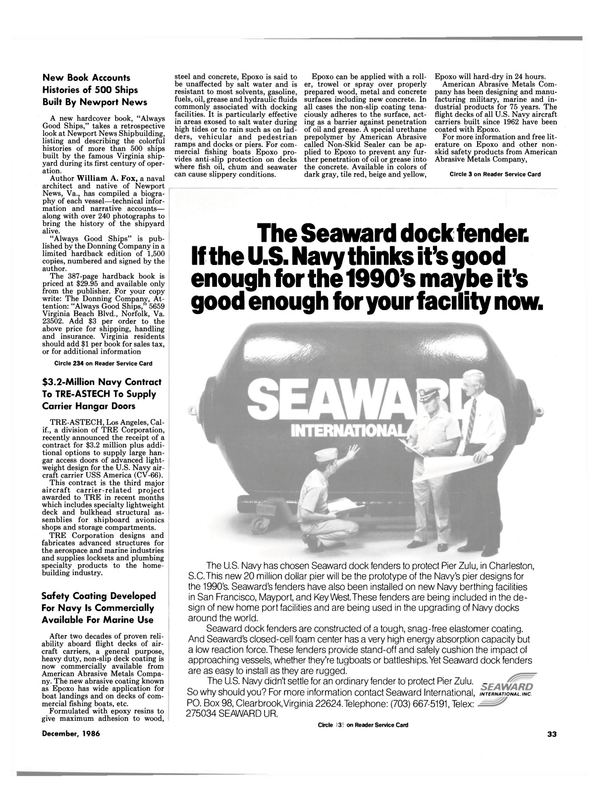